Who will rebuild Nepal after the quake? Women-led community groups who will stay the course

It is crumbled to the ground. The porch upon which my colleagues sat in Kathmandu just a few months ago, talking with women’s group members of ASHA Nepal, is now half gone after the earthquake, and no longer safe.

Once people receive such an earth-shattering reminder of the fragility of life, how do they begin rebuilding?

If I’ve learned anything so far from IDEX’s partners, ASHA Nepal and Women’s Awareness Centre Nepal (WACN), it is not the physical structures of concrete or brick or wood that matter.

Rebuilding starts from structures that are unseen.

Before 25 April, ASHA Nepal and WACN were working with more than 36,000 women in Nepal. These cooperatives, self-help groups, and women’s groups sprung immediately into action following the earthquake. Though they were originally formed under the banner of poverty alleviation, these groups’ resources were particularly well-suited to disaster response. 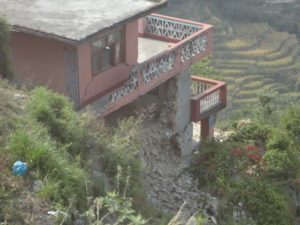 When tragedies strike and we hear about them in the global media, we often think of the large, national-level disaster response mechanism, associated with massive shipments of goods, the deployment of international humanitarian workers, and vast funding appeals.

But when your house falls down, to whom do you turn first? For most people, it’s the immediate social network upon which they rely – family, friends, and neighbors. They are the true ‘first responders’ and their continuity of support throughout the recovery process is why grassroots organizations matter so much in the wake of disaster.

These groups’ deep contextual knowledge, embeddedness within communities, language and cultural skills, and ability to operate with an ear close to the ground is what is most needed in the short- and the long-term. Their efforts to respond might look very different from the international disaster response infrastructure – no fleets of delivery trucks or rows upon rows of tents – but their resourcefulness and compassion deserves more thoughtful philanthropic investment. Given the recent media coverage of the international response following the Haiti earthquake, there are thankfully more and more options for giving money directly to local disaster response and recovery activities.

Rebuilding homes and civil infrastructure will never be the stuff of grassroots organizations, and should never supplant major recovery efforts. But philanthropy dollars must also reach local leaders, who have the ability to reach the most vulnerable, quickly. They are not waiting for help to arrive from abroad. For survivors in their communities, they are the help.

Our Asia Regional Director was in touch with our partners in Nepal during the night of 25 April to let them know we were thinking of them. Though the staff were physically okay, as one can imagine, they were very shaken. Like us, they were trying to get in touch with leaders in the communities where they work to see if they were okay.

Over the next few days, IDEX’s partners were dealing with the surge of needs and the aftershocks. They were also listening and listing, as each women’s group shared what their most immediate needs were.

With help from our supporters – who wanted to ensure their dollars reached people most affected by the earthquake – IDEX was able to make the first transfer of funds from our Nepal Recovery and Resilience Fund within the first week after the earthquake. And with the fund, we’ll be able to double our grant making to these organizations for the next three years.

The cooperative members with whom WACN and ASHA work have been making decisions together for over a decade. They know how to establish shared priorities and effectively utilize shared financial resources. And now as the food, tarps and medicines have been distributed, they are working together to help people prepare for the coming monsoon season. Our partners tell us that there has been a pause on rebuilding, as permanence is secondary to people’s concerns about what they are going to eat if they don’t get seeds in the ground.

Our partners are facing a long road ahead, but they have resources that stem from people’s connections and obligations to each other. As funders we don’t have to make the same mistakes seen in Haiti or during Katrina. When we invest where the roots are deep, we can help make regrowth possible.

Jennifer Lentfer is the director of communications at IDEX.

Comment: What happens after the earthquake hits? Lessons from Nepal | IDEX