The current role of civil society and its relations with government was at the centre of debates at the XII Iberoamerican Meeting of Civil Society, which took place in the lovely town of Puebla, Mexico, from 13 to 15 October. Under the title New roles and expressions of civil society, over 800 people from Latin America, Portugal and Spain gathered to discuss the challenges faced by the region regarding the relations between government, civil society organizations and the private sector.

The Iberoamerican Meetings, founded in Cárceres, Spain, in 1992, are held every two years with the main objective of strengthening philanthropic infrastructure in the region, mostly encouraging and supporting the establishment of associations of foundations in countries where they are absent or in need of reinforcement. It is no coincidence that the next meeting will be held in Caracas, Venezuela, in 2016.

The President of Mexico, Enrique Peña Nieto, officially opened the conference with a speech highlighting the importance of civil society organizations in supporting government in its role of providing social welfare and development. He also emphasized the critical role human rights play in society – likely a tacit response to the mass murder of 43 Mexican students, which has shaken up the country.

The event, as these large gatherings tend to do, addressed a very wide range of issues related to philanthropy and civil society in several plenary and concurrent sessions – which makes the conference a different experience depending on your choice of panels. But it was possible to identify, on a personal note, a few recurring elements in many of the sessions. 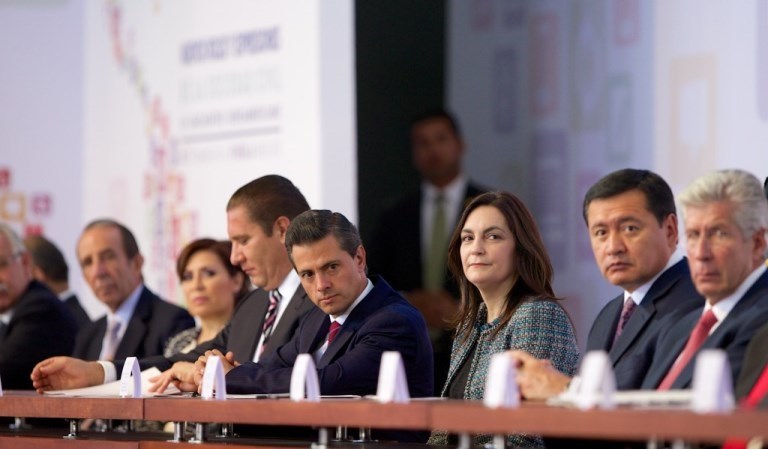 Enrique Peña Nieto, President of Mexico, in the middle, with Luisa Mariana Pulido (Venezuela), president of the board of the Iberoamerican Meetings, on his left and is the governor of Puebla on his right. Further right is Cemefi founder Manuel Arango.

Given the diversity of participants and panellists, it was possible to note a tension between more traditional or assistencialist approaches to philanthropy and ‘new models’ of social investment – often simply defined by its novelty character. The discourse around the need for innovation, in many cases connected to the relevance of engaging the new generations, was also present in several moments.

A challenge that I believe the Iberoamerican Meetings face, as well as the philanthropic sector in many Latin American countries, is developing closer ties with social movements and civil society organizations working in the forefront of social change. On this issue, I found particularly compelling the argument of Maria Angelica Luna Parra of INDESOL, that foundations should cease to see themselves as a separate sector, but rather see themselves as part of a larger civil society. Not above, but within it.

The session I took part in was developed based on partial findings of ongoing comparative research on the philanthropic sector in Argentina, Brazil, Colombia and Mexico, carried out by the associations in each of the countries. It was interesting to realize that, even with all the differences among the countries, some elements seemed constant: weak support from foundations to civil society organizations, low levels of transparency, increased focus on public policies, and a growing alignment between corporate foundations and their sponsor companies.

Overall, there was a strong call for more participation in public policies and the development of stronger channels for citizen mobilization and intervention in the public sphere, as demonstrated by the case of Meu Rio, presented by Alessandra Orofino. Based in Rio de Janeiro and expanding to other Brazilian cities, Meu Rio is a platform for social mobilization initiated by anyone who wishes to create public pressure for improving lives in cities – ranging from reforming a community square to pushing for change in legislation.

One expression by Esteban Moctezuma of Fundación Azteca summarized the need for more participation and horizontal relations, with a particular local flavour: ‘we need fewer pyramids and more squares.’ Hoping he meant it only as a figure of speech.