Selection of Trust partners in Poland and Hungary

The Blue Sweater: Bridging the gap between rich and poor in an interconnected world
Jacqueline Novogratz Barnes & Noble $19.96
ISBN 9781594869150

By using philanthropy in a more market-driven way, ‘we can find where the inefficiencies lies and where public need lies’ and thus build a more inclusive economy, argues Jacqueline Novogratz, CEO of the US-based Acumen Fund. In The Blue Sweater, she recounts her own experiences of working with people at the sharp end of development and argues that, while traditional charity often fails, philanthropic ‘patient capital’ can help make people self-sufficient and change millions of lives. 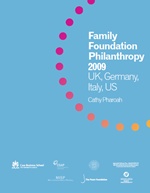