Giving Our All: Reflections of a spend-down charity

American India Foundation – Tapping into US wealth for India’s development 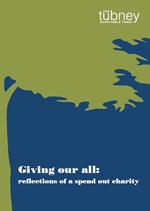 I’ve read my fair share of foundation reports and this is one of the best I’ve ever read. I feel uniquely placed to recommend it, having recently published my own family foundation’s final report after18 years of grantmaking.

Giving Our All is engaging and easy to read, disarmingly honest and overflowing with valuable lessons. New donors, funders who are considering spending down and seasoned philanthropists will all learn something about impact giving, partnerships, capacity building and strategic grantmaking.

This report was written with the express aim of sharing the lessons and reflections of the UK’s Tubney Charitable Trust, which will close its doors in March 2012 after 15 years of existence. The report is divided into two parts. The first is an overview of the trust’s grantmaking from 1997 to 2012, divided into five distinct chronological periods. The report describes the progression of the overall grantmaking, the sharpening of the focus and the escalation in overall giving in each period. In the final period preparations are made to close down the trust, which was created with a finite lifespan.

The second section describes the trust’s programmatic work and the relationships it developed with its grantees. It also talks about the work it did to develop partnerships and networks and the investment it made in strengthening its grantees. This section includes the lessons that the trust is seeking to share with others, as well as an excellent list of reasons to spend out, one of the best I’ve read. The ten reasons are clear and convincing. The entire report is rich in enlightening case studies describing the work of the trust and many of its grantees.

In its early years of grantmaking the trust, by its own admission, made good grants, but taken together they didn’t amount to a coherent story. This is where one of the trust’s key lessons emerges: time and money spent on planning is almost always a good thing.

The trustees then decided to focus on two programme areas: conservation of the natural environment of the UK and improvement of the welfare of farmed animals in the UK and internationally. It retained this focus for the next eight years and made some very important contributions to these fields, such as reducing lameness in dairy cattle and helping with the purchase and restoration of wilderness areas to protect natural habitats and create corridors to allow animals to move between them.

I couldn’t help but wonder what the philanthropic landscape would look like if every foundation approached its grantmaking in the same way as the Tubney Charitable Trust. It maintained a very tight focus and, as a result, had tremendous impact. It looked at the field holistically and was strategic about selecting where it could add the most value. It built strong relationships with its grantees and expertise on its staff so it could contribute to the debate. It brought together diverse constituencies and helped facilitate dialogue that highlighted common ground. It also realized that foundations were often the only ones able to take risks and try new things, funding pilot projects and new initiatives that were risky and pushed boundaries.

Finally, toward the end of its grantmaking, the trust focused on capacity building, providing a limited number of large ‘legacy grants’ designed to transform the capacity of some of its grantees to make good on their goals after the trust is gone. Having focused a large percentage of my own foundation’s assets on capacity building, I was delighted to discover this. In their own words: ‘Don’t hesitate to spend money on planning; good business planning and financial skills are thin on the ground, and charity managers can be over-stretched.’ The Tubney trustees also understood – as few foundations seem to – the need both for core support as well as additional funding to strengthen planning and management practices. Probably because they prioritized going into the field and getting to know their grantees – another practice that is rare.

This report shows that a relatively small charitable trust can have a large impact by being proactive and extremely strategic. I was particularly impressed by the trustees’ willingness to share its lessons and experiences, both good and bad. As it says at the beginning of the report, it is perhaps the mistakes and detours that are the most instructive. There is indeed a lot to learn from the experience of the Tubney Charitable Trust.

Giving Our All: Reflections of a spend-down charity
Tubney Charitable Trust PDF