Give and Take: What’s the matter with foreign aid?

The Palgrave Handbook of Global Philanthropy calls itself a ‘comprehensive reference guide to the practice of philanthropy’. This description is perhaps not quite on the mark: while certainly comprehensive, the book focuses principally on individual giving, leaving out private institutional giving and other forms of philanthropic behaviour. As a study of non-profit sectors around the world and individual giving to them, though, the work is superb, featuring in-depth looks at donor behaviour in 25 individual countries and the Caribbean region and solid analysis of the field at the global level.

In the introductory chapter, the editors note that, while much is known about individual motivations for philanthropic donations, much less is known about how the context in which people live influences their giving. In particular, the editors hope the handbook will enable a better understanding of how differences in government, fiscal and legal policies for philanthropic actors and non-profits shape giving. Ultimately, the editors’ goal is to deepen understanding of how to shape a society with the best conditions for giving. While I’m not sure the handbook altogether achieves this ambitious goal, it most certainly makes an important contribution to it. 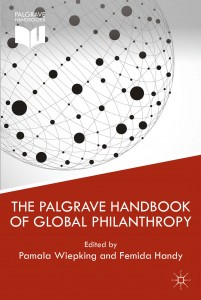 The bulk of the handbook comprises chapters focused on the individual countries, each beginning with a historical overview of philanthropy in that country. These chapters demonstrate the deep, rich and diverse history of philanthropy across the globe. Most readers will be familiar with the Anglo-American narrative on organized philanthropy; how refreshing to read about traditions in Russia, Lebanon, Bulgaria and elsewhere.

For the 21 countries where relevant data was available, the chapters include detail on who gives, how much, and to what causes. Overall, who comes out on top in terms of generosity? Though not true of all countries, the most likely generous donor is an educated woman who attends religious services.

One major cross-cutting element is the non-profit social origins theory of Lester Salamon and Helmut K Anheier, which posits four types of non-profit sectors: statist, liberal, social democrat and corporatist. Based on these types, Salamon and Anheier predict a range of expectations for philanthropy. Interestingly, they do not hold up entirely. For example, they predict that countries classified as liberal should have the highest percentage of the population giving to charity; in fact, countries classified as social democrat (including the Netherlands and Switzerland) often top the list.

Another interesting chapter takes the country data to explore the relationship between public funding levels and private philanthropy. Contrary to predictions of economist Milton Friedman, who in Capitalism and Freedom argued that a country’s welfare system would ‘poison the springs of charitable activity’, in fact the country studies suggest that the higher the percentage of non-profit revenue that comes from the government, the more people in that country give to charity. Even in strongly social welfare states like the Netherlands, Canada and Ireland, people give generously.

The editors acknowledge gaps in the handbook. Most notably, no countries in South America or Africa were covered. Much of the country-level data comes from before 2008, based on the most recent data available, but one wonders how permanent the patterns uncovered will be. Given the apparent gender differentials in giving, a chapter on women’s giving would have been of value. One more concern: at a cost of US$210 (£150), the handbook will be unaffordable to many.

While an academic text, I found the language accessible and I suspect it will be enjoyed by anyone with a general familiarity with the non-profit sector and philanthropy. Rich in content, the handbook represents an important contribution to the study and practice of philanthropy. 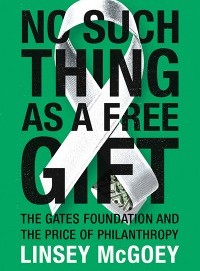 No Such Thing as a Free Gift: The Gates Foundation and the price of philanthropy – Linsey McGoey