The Social Entrepreneur’s Handbook: How to start, build and run a business that improves the world 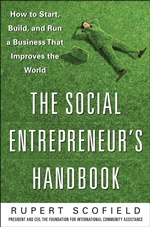 Sitting here in Mumbai having spent a few days last week facilitating Dasra’s skills-building programme for social entrepreneurs, Dasra Social-Impact, it seems an apt time to be reviewing The Social Entrepreneur’s Handbook. Rupert Scofield’s book is a series of case stories with advice from a mentor-like narrator. He structures his lessons from the field around the themes of mission, people, resources, strategy and sustainability – cornerstones of any instruction on building or scaling an organization, but amusingly titled and not at all dry like a typical management textbook.

This is not, I am tempted to conclude, a handbook in the true sense of the word, as I think I would find it a little taxing to dip in and out of it for quick pieces of instruction. It is much more of a biography of an organization and its leadership, organized into some important lessons. It is better read as a book from start to finish. That said, there is an index, so you can flip back to a certain topic if seeking a particular story or piece of information.

The book starts with an impossibly hard chapter to write – ‘Finding your mission possible’. To me this chapter begged the question: can you learn social entrepreneurship or is it innate? After spending time recently with 40 inspiring people who were seeking to improve the future of India’s poorest, it was clear to me that those actively seeking their mission were those who were most lost. Those with a clear path already had their mission inside. I therefore started the book feeling rather sceptical about how it would develop. This was, however, the only part of the book that disappointed me, and I went on to gallop through, thoroughly engaged.

At the end you are left with a very clear understanding that ‘it’s all about people’ or, as Scofield describes his chapter on people, ‘It takes an asylum!’ Although there is one extensive chapter specifically about people identification and management, the overriding message in every chapter is that everything from technology to fundraising, from risk management to innovation, relies upon getting the right people and doing the right thing with them. A typical handbook would fail miserably to teach about people, hence Scofield’s choice of format works: stories of people and situations.

Scofield’s style is very readable, though on occasions the humour is rather US-centric. His terms and classifications for people and scenarios are sometimes clichéd but really very funny, with something of a tongue-in-cheek nod in the direction of a self-help guru. It is an extremely honest book, and in a world where we find it very hard to admit our challenges and share mistakes and failures, it is refreshing to be party to some tales of disaster that really reassure you that that is what life is like in the sector.

I’m not sure the book would necessarily work as a roadmap for someone starting off as an entrepreneur – it might be slightly overwhelming as it is about a large, global organization that has successfully transitioned from grant dependency to a sustainable model. On the other hand, it is not just for the successful social entrepreneur. I was interested that Scofield played a significant role as a number two for many years – something I too have done – and he has a lot of wisdom to impart to those in second-line management. He describes the whirlwind that was FINCA’s founder, and his stories certainly resonated with me. All too often, available coaching and mentorship is aimed only at leaders, but really if second-line and senior management align with the advice in this book, they can play a significant role in the social entrepreneurship journey.

The Social Entrepreneur’s Handbook will also be interesting for those working as intermediaries and building skills in the sector, as what this book probably does best is to give the reader examples rather than tools. At the end of the day, when we are facilitating Dasra Social-Impact, what we rely on, and need more of, are stories from the field rather than checklists and frameworks that all too often stay on the shelf.

‘How did you do it?’ is how the book is prefaced. At the end of the book, you take a deep breath and you do still feel you want to ask Scofield that question again, in terms of how he personally endured some of his trials and tribulations. This is a humble account of a great achievement and the kind of book you almost feel privileged to have been allowed to share. It deserves a broad readership.

The Social Entrepreneur’s Handbook: How to start, build and run a business that improves the world
Rupert Scofield McGraw-Hill Professional £19.99/$28
ISBN 9780071750295