Naomi Klein’s books – bestsellers all – dive deep into the global challenges of our times, and come back with powerful reporting and polemic with the power to upend conventional thinking. They follow a similar path: first a seemingly intractable structural problem is provocatively reframed, then indicative elements of ambitious solutions are explored. Finally, Klein provides an early reconnaissance map of the communities of resistance and political forces that just might make those solutions a reality.

Her first book, No logo, dug deep into the cultural engineering behind alienating hyper-consumerism, positing disruption could come from an activism discernible already in ad-busting and anti-sweatshop campaigning, and the kind of alter-globalization coalitional efforts that finally took down the 1999 WTO Ministerial in Seattle shortly after publication.

Her second book, The shock doctrine: The rise of disaster capitalism, showed how politicians and corporations take advantage of disasters natural (hurricanes) or manufactured (market gyrations) to impose free market measures that no democracy could enact. 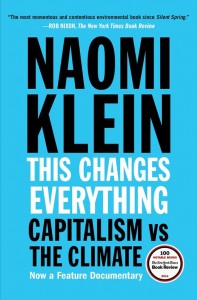 In her latest book This changes everything: Capitalism vs the climate, the opening salvo argues that in fact climate deniers such as the Heartland Institute may understand something that many mainstream environmentalists prefer to skirt. Deniers argue that if climate change were real, then everything would have to change. This position is closer to the predicament identified by Klein than the belief of mainstream environmentalism that we can solve a civilizational problem by tinkering at the edges. Klein argues that the facts demand we go deeper, exploding the ‘fiction of perpetual growth on a finite planet’.

Yet Klein faces this imperative not with an end-of-civilization dread but instead a ‘this-is-what-we’ve-been-waiting-for’ embrace. Everything must change and it’s about time. ‘If ever there was a moment to advance a plan to heal the planet that also heals our broken economies and our shattered communities, this is it.’

The book has three sections. First ‘Bad timing’, which notes that we face the gravest threat to civilization just when we are least prepared to deal with it. Concentration of wealth and power is at an all-time high. Just when we need robust public action, states have been captured, weakened and dismantled. ‘Magical thinking’ follows, where Klein dispels not science denial, but ‘policy denial’: prescriptions incommensurate with the scale of the problem or solutions lost in the hubris of human dominion of nature such as geo-engineering.

The final section is called ‘Starting anyway’. Klein surveys a trove of ideas, past experiences, and burgeoning activist networks to challenge the rules and remake politics, economics and ethics. Her first-rate reportage ranges across the frontlines of economic  ‘sacrifice zones’ where communities confront accelerating ‘extractivism’: gold mining in Greece, tar sands in Alberta, mountaintop coal mines in Appalachia and oil drilling in the Gulf of Mexico.  Klein’s reporting moves beyond the initial ‘no’ of resistance to explore the ‘yeses’ in practical early steps guided by an underlying affirmation of love of place, linkages between struggles and the ethics of shared purpose.

Klein is a brilliant polemicist, insightful reporter, and elegant writer. She provides a moving, timely and studied map of the multiplicity of communities in the climate fight and the struggles they face. It is thus both practical – asking what will work? – and political, asking what of capitalism must change, and what is the power we must build to get there?

This book has rightly drawn broad accolades. Her calls for action are spot-on: from leaving fossil fuels in the ground, to stopping new trade agreements that would lock down expansive corporate rights, to gathering ourselves to both cherish and work fiercely for our planet. 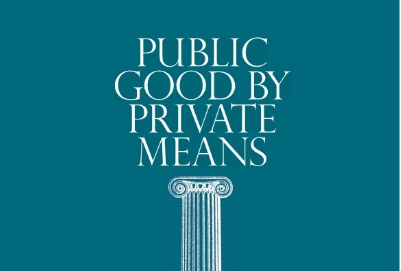