The American wealth and philanthropy culture is a mystery to many, even in the United States. How is it that the culture of generosity emerged here, dwarfing that of even the UK from which it at least in part sprang? Even more puzzling, how does this culture of generosity coexist with the crass commercialism, worship of wealth and outright hostility to government benefits that are also so common in America? 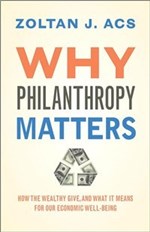 The general discussion of this mystery casts these forces in opposition. Zoltan Acs, a professor at George Mason University best known as a scholar of entrepreneurship, takes a different view in his recent book Why Philanthropy Matters. While the title is expansive, this is a book concerned with the United States and specifically the role of philanthropy in creating the unique economic system in this country (there is a brief chapter on global philanthropy, but it contains nothing new to a reader of Alliance). As Acs describes it, the US has a unique affinity for entrepreneurial capitalism with its emphasis on and acceptance of creative destruction. This economic system creates vast new wealth regularly. Compared to other countries, while the US may be more unequal from top to bottom, the ranks of the top have been far more unsteady and volatile here than anywhere else. No other countries, Acs argues, allow the titans of industry (both companies and individuals) to tumble so quickly and remorselessly.
The core argument of the book is that philanthropy is a vital ingredient in making the American system work at all. An economic system that produces such vastly different outcomes could not survive, much less thrive, without a system that recycles wealth into opportunity for others – that is what American philanthropy is all about, Acs claims. When Paul Ylvisacker famously said that ‘philanthropy is America’s passing gear’, this is certainly not what he meant.

While Acs’ attempts to position philanthropy as the admirable core of the American system are interesting and at least somewhat novel, they remain ultimately unconvincing. While there are plenty of stories of the wealthy donating vast sums to spread opportunity around, there is very little discussion of the role that other institutions have played in doing the same. For instance, Acs cites Stanford University as an example of philanthropy spreading opportunity far and wide. What he doesn’t discuss in similar detail is the role that US government research dollars played in turning Stanford into the intellectual behemoth that it is today. Nor does he note the vast class inequalities in admissions at top-tier universities like Stanford. The fact that most giving by wealthy households in the US does not reach far beyond their front doors is dismissed by defining such giving as charity rather than philanthropy.

The book ultimately reads as a helpful summary of ideas and examples for defenders of the American system and American philanthropy to use to buttress their case rather than a serious attempt to change the mind of anyone who does not already believe in the inherent virtue of these systems. It feels somewhat like those adverts you see that are clearly designed to reassure existing customers that they have spent their money wisely rather than to attract new ones.

The book’s epilogue does strike a surprising note. Acs follows his contention that philanthropy is central to the working of the American system all the way to tax policy. He essentially argues that the estate tax – perhaps the steepest of all American taxes which is levied on large inheritances, and therefore much hated by wealthy Americans – not only should remain in place but could plausibly be increased to ensure that philanthropy retains its role spreading opportunity. Make no mistake, Acs is not in favour of any of these inheritances being actually taxed; but he does think that social expectations for ‘giving back’ could use a hefty stick beside the carrot of public acclaim.

The bottom line: this is a useful book for those unfamiliar with America’s philanthropic traditions: it builds an interesting theoretical case for the centrality of philanthropy in America’s successes well beyond the social sphere. But there is a gaping hole where constructive critique of the American philanthropy system should be.

Timothy Ogden is managing director of the Financial Access Initiative at New York University and a contributing editor to Alliance. Email timothy.ogden@sonapartners.com