How can philanthropy support action on climate change?

What can philanthropy do for the climate? Strategic pathways for climate giving

No foundation is complete without climate awareness

$37m from Bezos, IKEA, Laudes for Science Based Targets initiative

On 31 March 2022, Synergos’ Global Philanthropists Circle, in partnership with Environmental Funders Network (EFN) and The Philanthropy Workshop (TPW), brought together funders for a ‘rare opportunity to hear from the broader environmental philanthropic community on how they are approaching the biggest issue of our time.’ Covering the themes of biodiversity loss, climate-friendly investing and shifting public opinion, the event convened a group of 20 guests at the Conduit in London.

Without action to tackle climate change, we are heading towards a world where our ‘food system is in collapse, a billion or more people are on the move because their land is no longer habitable, and economies are in flux.’ Florence Miller, director of EFN, began by setting the scene for the night’s discussion, highlighting the urgent need for climate action to prevent this bleak future. 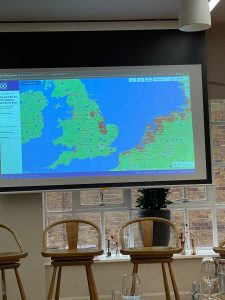 A map showing areas of the world that will be underwater by 2050. Photo credit: Jamie Webb.

She used digital maps to show guests what the world would look like by 2050 without intervention: large parts of East Anglia and London underwater, Bangladesh and South Vietnam gone entirely. The next map showed that by 2050 the tropics are set to experience up to 365 deadly heat days a year.

This is ‘not a world I’m willing for my children to grow up into’ Miller said, to everyone’s agreement. She then discussed what can be done to prevent this catastrophe with three main action points: stop burning fossil fuels, restore nature, and draw down carbon dioxide from the atmosphere.

Philanthropy’s role in this will be significant. Government and market forces are not sufficient, but philanthropy ‘is the catalyst for both of those things.’ However, with only around 2 per cent of global philanthropy going to climate, there’s a lot of work to be done to ensure this happens.

Following introductions, the three panellists discussed why they had shifted towards funding climate action. Sophie Marple originally set up Gower Street with her husband to fund girls’ education, particularly in Ghana. They have now pivoted to funding small organisations tackling climate change, because ‘every single philanthropic issue is made worse by the climate crisis.’

They had previously assumed that billions were already going into the climate crisis, but began to shift their focus to funding climate action when they realized that wasn’t true. ‘As a small funder you can make a difference’ was Marple’s key takeaway message.

Jonny Wates, who is the fourth-generation owner of the Wates Group, shifted his focus after doing a Master’s degree in sustainability leadership. Though the Wates Group has many different areas of interest, Jonny now focuses entirely on addressing sustainability, climate change and biodiversity loss, running landscape restoration and urban greening projects in communities. He emphasized individual agency and the need to ‘mobilize every single person we can to address and fight climate change.’

Devika Waney Mokhtarzadeh spoke from her perspective as the founding trustee of the Savitri Trust, which supports education, health and eyecare in India. She spoke candidly of her fight with breast cancer five years ago, which led her to reconnect with nature. This inspired her to shift the foundation’s focus to tackling climate change, after which they joined EFN.

Now, she’s a big advocate of collaboration in the philanthropic sector. ‘Silo working is a waste of time. If you’re not collaborating with community…you’re not going to achieve anything.’ Joining the wider environmental community changed their model of funding ‘to a much more outward-facing, collaborative way of funding.’ Her philosophy around funder-grantee relationships is to ‘identify champions and…give with love and give with trust.’

Now is the time for climate action

By 2030, it’s possible that we will reach tipping points where change becomes irreversible and climate action is no longer effective. ‘What you spend now is worth so much more than what you spend in 10 years’ time…right now we can make a difference’ Marple stressed.

Mokhtarzadeh followed up with something she’s excited about: the Savitri Trust’s microgrants for youth activists. The first recipient of this grant was a young Kenyan man who used the grant money to buy a piece of land and set up fruit gardens for his local community. Following the success of this, the Savitri Trust is now working with more young environmental activists who are driving change in the sector. 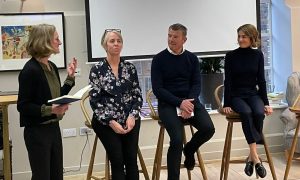 Many funders start off focusing on other areas and later pivot towards climate. Mokhtarzadeh spoke about her experience at the Savitri Trust, pivoting from community healthcare to climate. She was keen to stress that while charity is important work, it’s ‘not systems change’ which is what makes climate such a complex issue. Mokhtarzadeh’s advice to new climate funders is to ‘pivot out slowly with consideration’ but to remember that ‘if it’s a good charity model with tangible results – it has been our experience that a donor will quickly come to fill the gaps.’

For Marple, the intersectionality of climate with other issues is key, as ‘girls’ education is a climate goal.’ They still fund female education in Ghana, which was their original focus area, but they are now funding more to meet their climate goals and have decided to spend down the trust over seven years.

Marple’s advice to new climate funders is to ‘get support from other funders’ as ‘it’s an overwhelming sector.’ When Gower Street first pivoted towards climate funding, they joined EFN, and started funding through the rapid response fund which led to long-term relationships.

Marple has now helped to set up a non-profit called Impatience Earth to ‘advise individuals, trusts, foundations and corporates to fund more impactfully in a climate setting’ and help them understand the space better.

Changing the narrative around climate change

Systemic climate action requires a shift in mindset: a global transformation in the way we think about climate and the environment. ‘Our story is that we are separate from nature’ Marple stated. For this narrative to shift ‘everything needs to change, so everyone needs to get involved.’

Mokhtarzadeh pointed out that ‘indigenous people are a part of nature’ and that we still have a lot to learn from them.

‘I’m a big believer in not being blind to the problems, but positive energy does amazing things,’ Wates concluded. ‘It’s the germ of inspiration and joy…we can point people towards a beautiful future.’

Annmarie McQueen is the Marketing, Advertising, and Events Manager at Alliance.

Editor’s note 13 April 2022: Paragraph one under the section ‘Balancing climate philanthropy with other focus areas’ was updated to clarify a statement by the speaker. Paragraph four was updated to note that Sophie Marple helped to set up Impatience Earth.