Race is an area that is largely neglected by funders in Brazil. A recent (2007-08) survey by GIFE, the Brazilian grantmakers’ association, for example, revealed that race does not appear among its members’ top 12 priority areas for investment and activity. This is despite the fact that the main criteria for investment are the economic and social indicators of the population as well as their social vulnerability, and the well-known close association between poverty and race (it is common to say that poverty in Brazil is black) – and indeed between violence and race.[1]

However, this is about to change with the formation of a new funders’ collaborative, the Forum of Supporters of Racial Equity in Brazil (Forum de Apoiadores para a equidade racial no Brasil).

Two years ago, several independent grantmakers started to ask themselves why, in spite of the evident need shown by the above data, the majority of foundations and business institutes do not consider race as a funding area. Is it possible to continue making private social investment with the aim of developing Brazil without thinking of the development of its black population?

As part of its exit strategy from Brazil, the Kellogg Foundation took the lead in 2008 in launching a new programme specifically aimed at addressing racial equity. The goal of the initiative is to help create a new organization focused on racial equity with an initial endowment of $25 million to be built over a period of five years. Part of the Kellogg strategy was to involve other funders, since it is easier for funders whose main focus is not racial equity to work together on the issue rather than separately. The foundation convened a group of 18 funders in the north-east region of the country at the end of 2008.

These 18 funders were mainly international agencies and corporate donors. Brazil has witnessed a steady growth in philanthropy and social investment over the past decade, and this growth is largely in the corporate sector. The social investment coming from the business sector is considerably higher than that from family, individual or community sources, and business organizations make up 79 per cent of GIFE’s membership.

The first meeting raised a number of questions and potential challenges: the lack of knowledge among attending organizations about issues of race and how to deal with these issues through a grantmaking programme; the links between race and other issues such as gender, environment, housing and health and the difficulty of addressing them in a systemic way; the complexity of the race issue itself; the lack of visibility of racial issues in Brazilian society; and the potential for collaboration among foundations and institutes that do not have racial equity as their focus.

Despite this, the meeting demonstrated that there was a nucleus of officers at several foundations and institutes willing to explore further. So far, so good, but in the future involving foundation presidents and CEOs and ensuring wider buy-in within participating foundations is likely to become a big challenge if the collaborative wants to develop and grow.

In August 2009, a second, more structured meeting was hosted by the Ford Foundation in cooperation with Kellogg, AVINA and Oxfam. This meeting also included some companies like Petrobras, NGOs of the Brazilian black movement and UN agencies like UNIFEM and UNICEF. Two significant things emerged from this meeting. First, the desire of the participants to continue working together at the level of information exchange by building a permanent forum of donors for racial equity – and, given the political nature of race relations in Brazil, the need to build strong relations of trust among the various partners at the table. Second, neither racism nor race relations were central to the programmes of the majority of the organizations. Given the track record of the Ford Foundation and Kellogg’s new programme focused on racial equity, these two organizations emerged as the new forum’s ‘natural’ leaders. 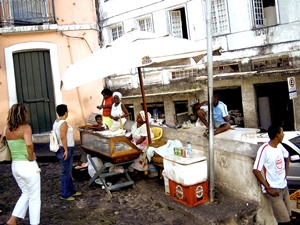 A third meeting, organized by Kellogg in Salvador in November 2009, looked at the state of funding and civil society advocacy for racial issues in Brazil. Two new funding organizations – the Brazilian Fund for Human Rights and the Elas social investment fund for women – attracted the attention of participants and were analysed in depth. Also, the Kellogg Foundation’s new programme in Brazil was extensively discussed. The prevailing view was that this initiative could provide the focus for a common effort with other donors, instead of atomizing their funding among isolated projects. To illustrate the complexity and challenges of funding in the race field, the Centre for Afro-Brazilian studies (CEAFRO) presented the results of a mapping of organizations and leaders striving for racial equity in the north-east region, which was part of the initial phase of the Kellogg initiative.

One result of this meeting was a further meeting organized by the Ford Foundation in Rio in January 2010 to discuss and advance the agenda of the media and racial equity and the participation of Kellogg and Ford in a roundtable on donors and racial equity with organizations of the black movement at GIFE’s national conference in April last year. Both of these events helped provide visibility to the common efforts of the collaborative.

It was only in a new meeting organized by Oxfam Great Britain in Recife in July 2010 that these issues were put on the table. It was evident to everyone involved that it was time for the collaborative to begin the process of institutionalization by clearly defining the mission, the objectives and the basics of an operational infrastructure. It was also agreed that, although the initiative had come from Kellogg, the collaborative should be independent. It now has national scope and the mission of promoting collaboration (joint actions not limited to funding), information exchange and co-investment (through the Kellogg-initiated fund or independently) to advance the cause of racial equity.

During the devising of these definitions, two very important challenges emerged for the forum. On the one hand, it must encourage the officers of individual foundations to continue working within their own organizations to ensure that the anti-racist programmes become institutionalized and do not depend on these individuals only. On the other, the forum must strengthen its relationship with organizations of the black movement in order to discuss their institutional development and other relevant issues. To this end, discussions began about a possible meeting of funders and black NGOs.

However, the last meeting, which took place in November 2010, failed to reach agreement on the subject. The discussion revealed different approaches on the role of the collaborative and the unmanageable expectations that could arise over money. A reviewed proposal will be discussed at a later stage. A concern of all the funders at the table was the institutional development of black organizations and what the collaborative can do to support it, and considerable time was devoted to consideration of this. The meeting ended with the planning of two further meetings with government and the UN agencies represented in Brazil.

Lessons learned and next steps

What does the experience so far tell us? First, setting up a funders’ collaborative like this, especially one dealing with such sensitive issues, is not easy. After two years and six meetings, there are still substantive issues to be resolved.

Second, given the scarce funding for promoting the advancement of racial equity, the idea of building a funders’ collaborative is timely and the political moment ripe for doing it. Funders working together could have a quality dialogue with government and with the organizations striving for racial equity, attract more resources to the cause, and give more visibility to the issues they deal with. This is what the forum wants and this is what is happening right now. It would not have been possible working separately.

Third, officers at funder organizations that do not have racial equity as a priority in their programmes find that the collaborative is a safe space where they can share and learn and support their own work within their organizations. However, since there is a need to formalize an operative structure to work more efficiently, commitment to the forum will need to move from the individual level (of officers involved) to the institutional level. This has been thrown into sharp relief by the fact that high-level changes are taking place at many of the organizations involved, including Ford and Kellogg. Now that trust has been built among the forum’s members and they have experienced the potential of working together, it is time to set clear goals for success.

Andrés Thompson is an independent consultant based in Uruguay. He led the Kellogg Foundation programme in Brazil from 2000 to 2010 and has been actively involved in the building of the forum. His opinions do not reflect necessarily the opinions of members of the forum. Email andres.thompson5@gmail.com