Egypt – Helping to regain the Egypt they dream of

‘There are those who give with joy … and that joy is their reward.’ These words of Khalil Gibran[1] describe a feeling shared by young and rising philanthropists in Egypt. The 25 February Revolution was a revolt by a remarkably young generation who demanded ‘Bread, Freedom and Social Justice’. Thirty-two per cent of Egyptians are under 14 and about 50 per cent under 24. It could never be expected that the 10 per cent or so over 55 could be the motor for positive change. Now young Egyptians are fighting for the means and the space to save Egypt.

Waqfeyat al Maadi Community Foundation (WMCF) is one example of this wave of young philanthropists seeking change through a different approach. Started with contributions from its founders and board members to set the model of the first community foundation in Egypt, most of its funding is local and comes from people in their twenties and thirties and from teenage philanthropists who want to bridge the gap between rich and poor in their community.

Egyptians are generous givers; 62 per cent of the population gives annually. The last national study on philanthropy[2] showed giving of around US$1 billion, a per capita share higher than that of foreign economic assistance to Egypt. However, little money is spent to drive real change because most of it is consumed by direct charity. Egypt’s young philanthropists want to respond to root causes rather than dealing with symptoms. This is why WMCF developed the Youth Engagement Programme (YEP), most of whose leaders are philanthropists of 14 years or a little over who want to give their own money and fundraise from their family and friends to fund small businesses for impoverished families, instead of giving them food.

The root of WMCF is the concept of waqf, a traditional foundation form in Egypt that seeks sustainability of funding to guarantee that development work will go on beyond the givers’ lives. For centuries waqf paid bird food distributors to feed birds, ensured street dogs found shelter, strangers received free accommodation, and road dwellers could drink from the sabeel (public water fountains) and eat in soup kitchens. In essence, all public schools and universities were financed by civic waqf. However, over the years the government steadily took over the waqf system until, in the 1950s with the rise of socialism, the waqf came fully under government supervision. It is the older, civic basis of the waqf that young Egyptian donors want to restore. 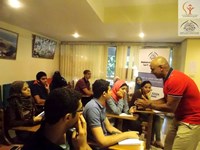 The young philanthropists at WMCF are often torn between giving to charity, as poverty and the lack of good free health services threaten the lives of many people, and their desire to respond to the root causes of poverty and to empower people to help themselves. Therefore, WMCF engages them with a mixed approach that allows them to support people through providing funds for job creation while making sure that these people as ‘business partners’ enjoy a safety net when they are sick or in serious trouble. Every year, young philanthropists from 14 up invest in around 200 small businesses through micro zero-interest loans. In addition to providing funds, they engage with the funded project. One example is a philanthropist in her twenties who started a small workshop for three orphan girls who made T-shirts out of cotton waste as part of WMCF’s ‘Opening the Door for Livelihood’ programme. Within a year, the lives of these three girls had completely changed. They had become financially independent providers of cheap clothes in their neighbourhood. Another good example is Am Fathy or ‘Uncle Fathy’. Once a community leader and the owner of a supermarket in a very disadvantaged area, he contracted an eye disease and became blind and bankrupt. WMCF funded a costly eye operation to enable him to regain his sight and also gave him a zero-interest loan. Meanwhile, young donors, who are benefiting from art courses of the Khan el Fenoun Art & Culture Center at WMCF, have raised money to allow Am Fathy to open his supermarket after his recovery. The joy of this young generation of philanthropists is not the immediate joy of giving, but of seeing people rise up in dignity and freedom. (Pictured: Waqfeya board member Tarek Michel prepares young donors to lead through soft skills training.)

The legal environment remains a major constraint. The new constitution needs to recognize that institutions like the waqf should be managed by civil society and CSO law needs to be written in a spirit that encourages trust and allows the civic sector to grow. Business approaches and ‘business unusual’ would allow young Egyptian philanthropists to find the space they demand in helping to regain the Egypt they dream of.

Marwa El-Daly is founder and chairperson of the board of trustees of Waqfeyat al Maadi Community Foundation. Email mdaly@aucegypt.edu