Is the subject of post-conflict and post-authoritarian transitions of special interest to human rights funders?

I can’t think of more than a few that have a publicly stated mission to support transitions. But nearly all human rights and social change funders that support work internationally do become involved in these kinds of transitions, for two reasons. First, this field, like every other, is susceptible to fashion, and fashion is often the country or region uppermost in people’s minds. Second, because boards and grants officers rightly see these transitions as moments of great opportunity, when they have a role to play in supporting civil society to secure and entrench the rights and dignity of local people.

How fast can human rights funders respond when such an opportunity arises? And how easily can they work together?

Let’s take these two separately: how quickly funders can get their act together depends on the circumstances. If it’s been a long-running struggle, as it was in South Africa or Northern Ireland – where it was possible to establish some useful civil society groups in and outside the country, and where the transition did not mean a complete breakdown in institutions – funders often have established relationships and can power up their support relatively quickly (though the funding world is never the fastest-moving!). But where the rule of law and society may have broken down completely and only diaspora groups have been funded, like in Iraq, then it’s harder for human rights donors to find something useful to support, so it takes longer.

How collaboratively can they operate? Funders are getting better at this. There are more vehicles around that make it easier for them to act collaboratively, and funders’ networks like Ariadne and the European Foundation Centre can play a role in enabling people to share information about strategies and promising approaches and in helping them to create pooled funding mechanisms.

But all of this takes time, so at the moment collaboration often comes at the price of speed. We need much more work and much greater levels of trust for funders to have collaborative plans on hold ready to be deployed when a transition happens. There have been some tentative attempts at this in the case of Syria, but this is complicated by the very rapidly changing nature of the conflict there.

What are the main concerns of human rights funders when engaging in a country undergoing rapid change after years or decades of conflict or repression? Does the risk appetite tend to rise or fall, as compared to more ‘ordinary’ times?

The appetite for risk definitely increases. Human rights and social change funders are more prone than most to flights of optimism. If they weren’t, they couldn’t go on working in this field! They feel it is an important part of their mission to respond when a region or a country undergoes a period of rapid transition. But how they do that is more problematic. If the groups aren’t there, then they can’t be funded, so to start with there may be not be anything useful to do. The other difficulty that grantmakers face is how to get funds safely to the groups they want to support. Is everyone else going to fund the same small groups because they are the only ones there? How long will they be able to fund for? Will it continue to be possible and will their boards continue to be interested? 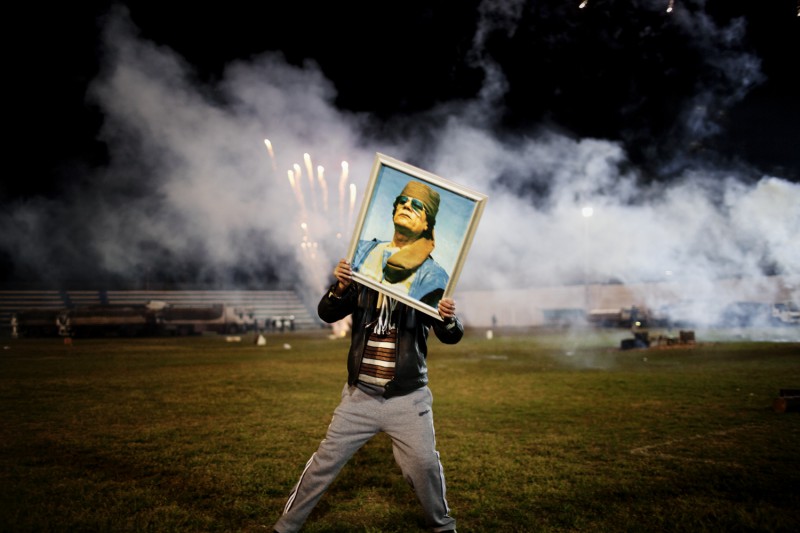 Libya, March 2011. A Qaddafi supporter holds a portrait of the Libyan leader as fireworks go up in the background on a soccer field in a suburb of Zawiyah where government minders took a group of foreign journalists to attend a staged celebration.
Photo by Moises Saman/MAGNUM

What can a funders’ network bring to members who are interested in becoming involved in efforts to support a country’s successful transition?

It depends if funders understand that their own support will have greater impact and be less likely to do harm if they make use of networks. Not all do, but if they accept that they can’t do this alone, then they are likely to use the resources that funders’ networks offer right through the process.

Ariadne’s support, for instance, starts with helping funders to gather information via the Ariadne online portal, which is like a private Facebook for funders. It will tell you who has already done work in this particular field and help you find out who is familiar with the region. Then we provide, in partnership with the International Human Rights Funders Group in the US, a suite of online tools to help funders scope the field, including Advancing Human Rights – the State of Global Foundation Grantmaking and The Global Map of Human Rights and Social Change Grants, available free to funders through Ariadne and IHRFG. The Global Map shows, down to grant level, who is, or has been, funding which groups, where and for what.

Grantmakers can also use Ariadne to convene meetings and experts, consider pooled funding or other joint or aligned strategies, and use the Policy Briefing or Grant-Skills Days to spread knowledge and approaches among other foundations. Finally, they can use the online portal to store lessons learned so that when the next transition comes along other funders don’t have to reinvent the wheel!

How has your network responded to the Arab region’s transitions?

Ariadne started off by holding a number of transnational tele-briefings for funders in Europe and the US in collaboration with the International Human Rights Funders Network. The aim was to find out who was interested in the different transitions and gather intelligence from experts about what precisely was happening and what the space was for funders. Ariadne set up an online community on its private portal focusing on the MENA region, to allow them to hold discussions via blog, to upload useful files and to ask for help.

We convened a number of face-to-face meetings, so the funders could begin to establish trust among themselves. With the International Human Rights Funders Group, we organized a funders’ learning trip, which took place in Tunis over three days in May 2012, to which we invited experts from across the region. More than 30 funders attended. Since then we have supported the development of various resources to assist funders working in transitions and helped to disseminate them, and we will continue to look for ways to do this as the Arab region’s transition changes shape and develops.

What have been the most important lessons so far for you?

The primary lesson for me from these transitions, and from the many others I have seen, both as a grantmaker and as a journalist, is that timing is everything: the right sum of money (often quite small) given at the right time to the right people is the most powerful social accelerant available on this planet. Judging that timing is a matter of experience and a willingness to experiment and take risks.

I think the recommendation that funders interested in supporting change hold a fund in reserve to deal with transitions is an excellent one. It saves time at the crucial moment, and makes it easier to take a sensible risk, as the funds are already dedicated to the transition and not being taken out of another pot where they might have been more safely spent.

The primary lesson for me from these transitions, is that timing is everything: the right sum of money (often quite small) given at the right time to the right people is the most powerful social accelerant available on this planet.

Two short examples of getting funding in a transition wrong and getting it right. First, getting it wrong. Some years ago, I was approached by the director of a small NGO that was setting up a programme to teach income-generating skills to women in a country that had emerged a few months before from a long period of terror and war. It wasn’t exactly what we were looking for, but there was interest in the country and there wasn’t a lot of choice in terms of providers. The board gave the NGO a substantial grant by its standards (over £70,000). A week later the NGO received $10 million from the US government! Was our grant needed or even noticed? I doubt it.

I think this sort of mistake is common in transitions, where there is often very little that can be funded. Unless private funders are clear about their own specific niche in these events and what they are hoping to achieve, their support can be overwhelmed by governments or aid agencies coming in, or simply by events on the ground.

And doing it better: Turkey is a country that has been in transition for many years. Ten years ago, the Turkish government passed legislation allowing local groups to receive funding from international donors. The Sigrid Rausing Trust set up the Strategic Fund for Turkey with the aim of offering core grants from £500 up to £30,000 to new and established civil society groups dealing with women’s rights, minority rights and human rights. The fund, administered by Global Dialogue, attracted other donors, and for the past seven years has supported the growth and strengthening of locally led human rights groups. In particular it has seen, for the first time, the emergence of a network of Roma-led NGOs and the creation of a number of new NGOs supporting LGBT rights. It’s an example of how quite moderate sums of money, applied at the right time and in the right way, had a considerable impact.

The final lesson is a simple one: live and learn! Transitions are a time when mistakes can easily be made, but if the mistake or the failure can be honestly acknowledged and examined, then it could be more valuable than any success.

Holding it together in Northern Ireland