‘I’m extremely optimistic that we can solve the climate crisis and in doing so can build a truly sustainable global economy. It’s my next crusade.’

Founded in November 2010 by Governor Arnold Schwarzenegger and other global leaders, the R20 Regions of Climate Action is a coalition of regional governments determined to take action on climate change now, rather than waiting on national government commitments and global climate agreements. R20 founding chairman Arnold Schwarzenegger sees this as his ‘next crusade’, as he explained to Dana Lanza and Alejandro Litovsky. In five years’ time, he hopes to see at least a quarter of the world’s economy represented by R20 members – no mean ambition. 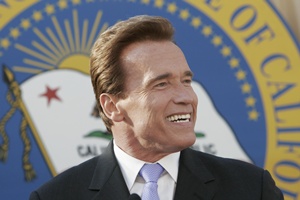 Please tell us about the R20 Regions of Climate Action and how it came into being.

As I reflect back on my tenure as Governor of California, I am extremely proud of all the many important things we were able to accomplish – most notably our efforts to put the golden state on track towards a green economy and to be the clean economy engine for the world.

I recognized very early on that real action takes place at the state and local level and I was fortunate to see first-hand that by bringing together diverse stakeholders we really do have the ability to transform our economy and fight climate change.

In November 2010, our third Governor’s Global Climate Summit in California brought together subnational governments from around the world and showcased their efforts to build sustainable economies and reduce our dependence on fossil fuels. After many discussions and through first-hand experience it was clear to us that states and regions were rolling up their sleeves and getting the work done, and not waiting for action at the national level. Talking to other governors and premiers, the UN, clean technology developers, financial institutions and NGOs, it was agreed: a new organization needed to be formed to accelerate this action.

The R20 is not just another NGO or network of regions, it is much more than that. It is a real coalition of forces which believe that climate change and green economic development can be tackled at the subnational level. The brilliant thing about the R20 and what differentiates us from other organizations is that we are a coalition made up of governments, finance, NGOs, academia, clean technology developers and business. This allows for us to develop a truly integrated action plan to develop a low-carbon, green economy everywhere.

I want regional leaders to know – you don’t have to wait, you can join us. The R20 teaches regional governments about the different technologies that are available and connects them to the right companies. And we are aware that it isn’t just about the know-how, it’s about finance. There is tremendous opportunity for foundations, philanthropists, social/impact investors and others to be part of a real solution by joining this unprecedented group of partners.

The R20 is in a way a matchmaker – you bring the investment capital or grant funding and we connect you to a willing government and technology partners that can successfully implement low-carbon projects. I believe this is an approach that could be the catalyst for real change. Imagine removing the barriers to bringing finance to the picture and you will see the rapid deployment of clean energy projects that will improve the global economy, lower emissions and provide new jobs. The government members of the R20 are eager to open the door for investment in order to facilitate a variety of projects like renewable energy production, boiler efficiency upgrades, waste-to-energy projects, and replacing old street lights with efficient solar-powered LED lighting.

Through the mechanism of the R20 governments will no longer have to walk away from important projects because they don’t have the financing. This is why I believe the R20 enables new, bold opportunities for investors to really make a profound difference.

You mention California as being an engine for the world’s green economy. Can you highlight some of the accomplishments that enabled the state to assume this role?

California has a long history of implementing bold environmental policies and of course in recent years promoting a low-carbon economy. There have been many successful programmes in the state including California’s visionary leadership on energy efficiency. I was fortunate as governor to continue this tradition by implementing several groundbreaking efforts. For example, the Global Warming Solutions Act of 2006 was created not only to put a cap on greenhouse gas emissions but also to promote renewable energy development, alternative transportation fuels and even carbon trading, which all serve to boost the economy and create thousands of new jobs.

Another major action I was able to take as governor was to sign an Executive Order which created a plan to expedite the availability of hydrogen fuelling stations and products that use hydrogen. The plan was developed through a collaborative process with input from more than 200 stakeholders from energy, auto and technology companies, environmental organizations and local, state and federal government agencies. In 2006 I also signed the Million Solar Roofs bill into law. This law was implemented to help California achieve the goals of building a million solar roofs in ten years and of making solar power a mainstream energy resource over the coming decade.

In the US the issue of climate change has taken a back seat to the many other pressing issues, for example the economy and jobs. How do we fight climate change in the context of today’s economy?

If we want to fight climate change, if we want a green energy future, we must do a better job of communicating. Too many environmentalists think the only way to fight climate change is to talk about melting ice caps and rising sea levels. These are important arguments but don’t always work. Some people can’t relate to them. Some people don’t even believe in them. We have to talk about things that matter to people.

We should look at this like a four-legged stool; right now we’re using a one-legged stool. A one-legged stool is unbalanced. A four-legged stool is strong. The first leg is jobs. Who could be against this? The second leg is national security. For decades, industrialized democracies have been in the terrible position of having to purchase oil from foreign countries, sending vast amounts of money outside their borders. A green energy future would end this dependence and give us energy freedom. The third leg is health. Pollution kills. One study by Cornell University concluded that a staggering 40 per cent of deaths worldwide are caused by water, air and soil pollution. Why is there no uproar? Because we are failing to communicate – it’s our job to get that message out. And the fourth leg, of course, is climate change. You can have the best project in the world but if you don’t promote and market it the right way, no one will buy it. You have nothing.

The R20 addresses all four legs of the stool. In partnership with the foundation and investment community, the R20 is well poised to be the driving force to take full advantage of new technologies in order to strengthen local economies, improve public health, create new green jobs, lower GHG and reduce our energy consumption.

On a personal level, how did you gain an appreciation for these issues and what are the criteria for success looking forward?

As a child growing up in Austria I acquired a great appreciation for the natural environment. I have carried this appreciation and passion with me throughout my life both as an actor and as governor. As governor, I was able to pass laws and inspire other states to expand the use of solar power and new technologies like hydrogen-powered cars. But I learned in my career as a bodybuilder and an actor that no matter how good your product may be, you have to get out there and promote it so that people embrace it and make it more popular. That’s how it is with clean technologies. You can pass laws, but you need to inspire people to buy the new technologies and show them why that’s a better way.

Looking forward, within five years I would like to see at least a quarter of the world’s economy represented by R20 members so we can start to make a real difference. This is not at all unattainable. In the last year I have had the privilege to speak to groups all over the world about the R20. The feedback I receive is not surprising: people are recognizing that we have a formula that is focused on real action and real results. I’m extremely optimistic that we can solve the climate crisis and in doing so can build a truly sustainable global economy. It’s my next crusade.