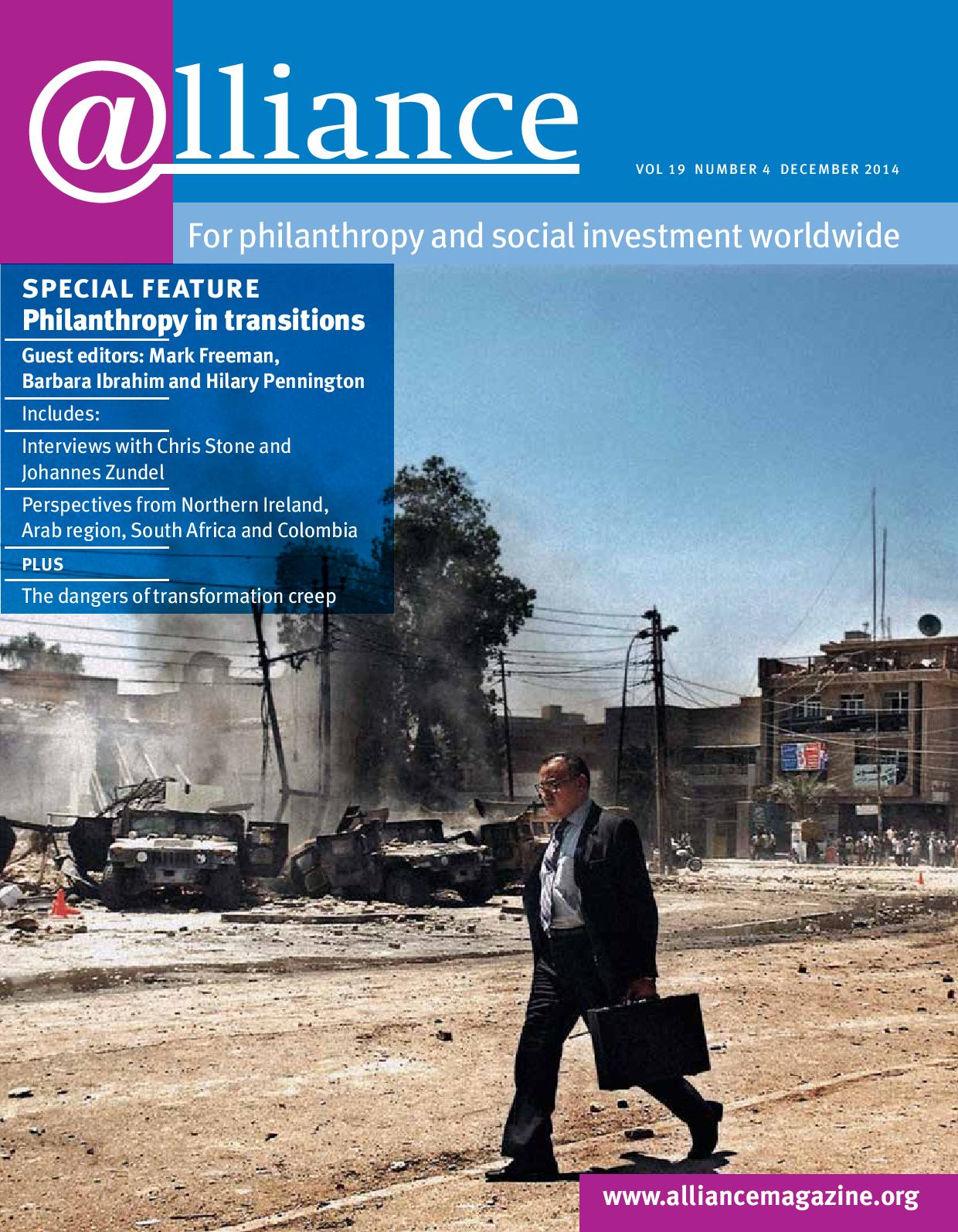 Founded in 1971 at the height of the Cold War, the Berghof Foundation is dedicated to preventing violence and creating lasting peace in conflict situations. Its mission statement is ‘creating space for conflict transformation’. Johannes Zundel, whose father created the foundation, talks to Mark Freeman about the genesis and development of its work and explains why he thinks transitions offer philanthropists prepared to take bold risks the chance to be at their best.

Could you tell me something about the Berghof Foundation and your involvement in it?

The foundation was set up by my father, Georg Zundel, in 1971. He was a physicist and the grandson of Robert Bosch, who founded the company of the same name. My father inherited a very small part of the company and started a number of ventures, of which the foundation was one. He often showed a certain stubbornness about what he considered right and necessary, but that stubbornness was fundamental to this really unique organization. I think that, working in transition environments, it’s important that you don’t give up too easily, that you are able to cope with backlashes.

The Berghof Foundation also came out of the very strong feeling in postwar Germany that the Second World War must not be repeated, and this feeling intensified against the backdrop of the Cold War and German rearmament. The idea behind it was simply to finance a bunch of smart people to think up solutions to the most pressing conflict-related issues. Nobody thought too much about its structure.

Do you think an institution like this needs to begin with a strong impulse and a big general idea, and evolve in its own way?

A creative impulse is definitely the key. But a smart idea is not sufficient to make a project sustainable. What you need is both refreshing inspirations and supportive structures for their implementation. An important challenge for Berghof is to maintain a dynamic balance between the two.

What are the characteristics you feel have to be maintained?

When Berghof was established, peace research in Germany was very controversial, and my father helped to establish a field which today has become mainstream. Obviously there is some risk-taking, and you have to take risks again and again if you want to stay relevant. He also wanted to bring to the debate the voices of people who had something to say but lacked the resources to make themselves heard. Again, I see continuity with what we are doing today.

Have there been particularly important chapters in the story of Berghof that illustrate its development and the values you are describing?

There certainly have been turning points. At the beginning of our grantmaking operations, the focus was on the Cold War, on issues like arms control, disarmament conversion and technology, and conversion played a much greater role. That also reflected my father’s scientific background.

When the Cold War ended, conflict realities changed. We gradually refocused on the very broad theme of ethno-political conflicts, social and identity questions that concern the relationship between society and state. We started funding and organizing dialogues in the Caucasus, for example, and reflective workshops in former Yugoslavia.

The refocusing also changed the way we worked. Initially, Berghof was primarily a grantmaking organization but over time, and because of the changes in the nature of conflicts, we increasingly developed a presence on the ground. This experience of providing direct hands-on support to conflict stakeholders in different regions led us to develop the conception of ourselves as an international organization. 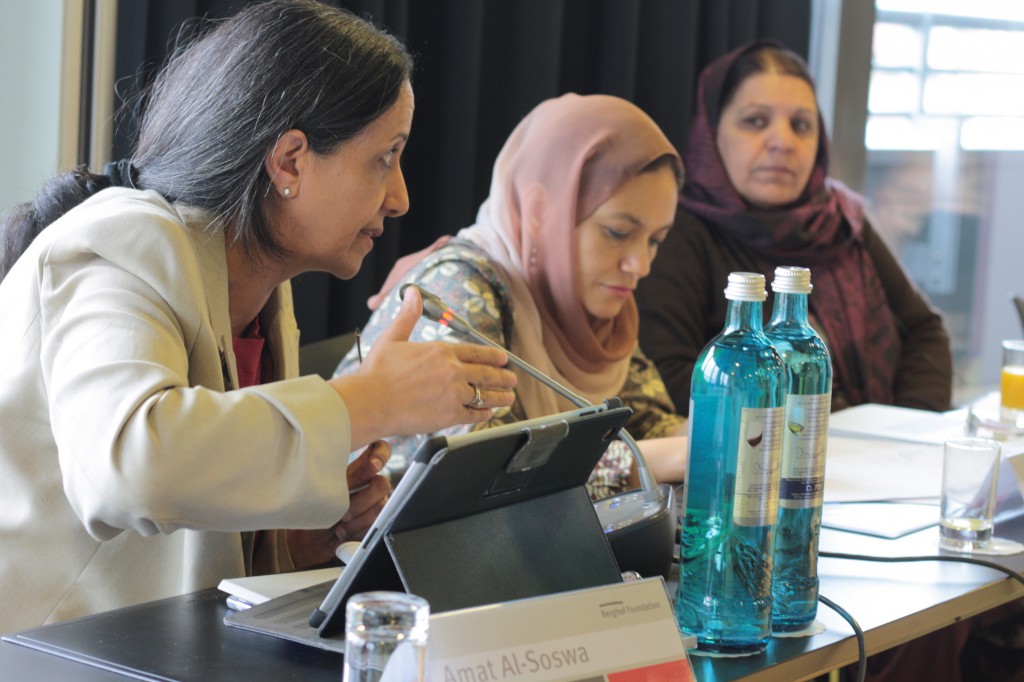 Conference organized by the Berghof Foundation for female members of the High Peace Council of Afghanistan and political advisers to the Joint Secretariat, Berlin, March 2014.

What’s the balance now between operational work and grantmaking?

I would say that what matters at the end of the day is not the balance between the two, but whether you are able to provide conflict stakeholders and actors with the resources they really need.

What are the guiding values of the Berghof Foundation’s approach, particularly in relation to transitions?

I think there are implicit values – values that are simply rooted in our culture. As part of our refocusing process, we have tried to make those values explicit. We try to provide support to conflict transformation processes, which basically means preparing the ground for reaching a peace settlement in a way that violence can be avoided. To do that successfully, all stakeholders have to be involved without us taking control of the process.

Our mission statement is ‘creating space for conflict transformation’ and what is essential is that we accept others, not ourselves, taking centre stage.

That has a number of implications for how you present yourself. You have to be modest, because such processes are essentially based on trust, and you don’t want to undermine that. Our mission statement is ‘creating space for conflict transformation’ and what is essential is that we accept others, not ourselves, taking centre stage. You don’t want to be seen as intervening, which is why I like the acupuncture analogy mentioned in your Supporting Countries in Transition guide, the idea of creating targeted pressure that enables what is already there to develop in constructive ways.

You mentioned risk-taking earlier. If you’re willing to take risks, does that mean you’re also willing to accept a certain amount of failure?

Yes. Failure is a possibility, and in the short term, it’s almost certain. For example, we had a big project in Sri Lanka and then the government decided to give up the peace process and resolve the conflict on its own terms. We failed to understand that in time, so we were not well prepared when the process failed and we had to leave the country and we even had death threats. But we learned from the experience that it is absolutely essential to continuously reassess conflict situations on the ground. This is also one of the reasons why we see reflection as a core value in our work.

What do you mean by that?

We understand that transitions are learning processes in which conflict stakeholders come to interpret and understand their own role and experience from new vantage points. That started with the action-research projects and reflective workshops which we supported and organized in the 1990s, and it continues to this day. There’s one project we did where we brought members of non-state-armed groups together and had them reflect on their own experiences, for example in negotiation processes. At the same time reflection is an inherent part of our work in that it helps us to learn from failure and do better next time.

What are the boldest risks that you’ve taken as a donor, either as an individual philanthropist or through Berghof?

The two are related, and the project we’ve just been talking about provides a good example, because starting out with the value of inclusion means that you engage with difficult, hard-to-reach and stigmatized actors. That involves reputational risks and sometimes even legal risks; moving into that field of activity right after 9/11 was a challenging and controversial thing to do.

In retrospect, I can say that it was absolutely the right thing, because the trust and the network that we have managed to build since provides us with a significant lever in supporting such actors in transition contexts today. However, at that time, it was a huge challenge, and there has to be a committed philanthropist who says, ‘I know this is risky but it is hugely important – and if you don’t do it there is going to be no reward.’ That’s definitely how it felt for me. It’s so easy to get people together who already agree but no change comes out of it, and you go home frustrated.

Another theme we wanted to discuss with you is impact and what you think it is important to measure.

It’s difficult to apply quantitative indicators in transition contexts. Sure, if you are running a huge foundation and it’s not your own money then accountability matters a great deal. I understand that. But at the same time I find it sad. Generally speaking, I don’t have a problem with metrics and I think developing them can be helpful: the rigour involved forces you to think about what you really want to achieve.

But when you use metrics as substitutes for continuous and critical reflection, they can become harmful and counter-productive; they can become instrumentalized for bullshitting yourself. I think that is especially true in transition contexts because they are very complex situations, with non-linear developments which are hard to grasp through linear metrics.

There’s also the problem that there’s a certain credit-taking attitude related to impact measurement which could undermine the trust and ownership of actors on the ground. To put it in a nutshell, you can try to develop metrics, but sound principles and values, and a critical and questioning attitude, are far more important. 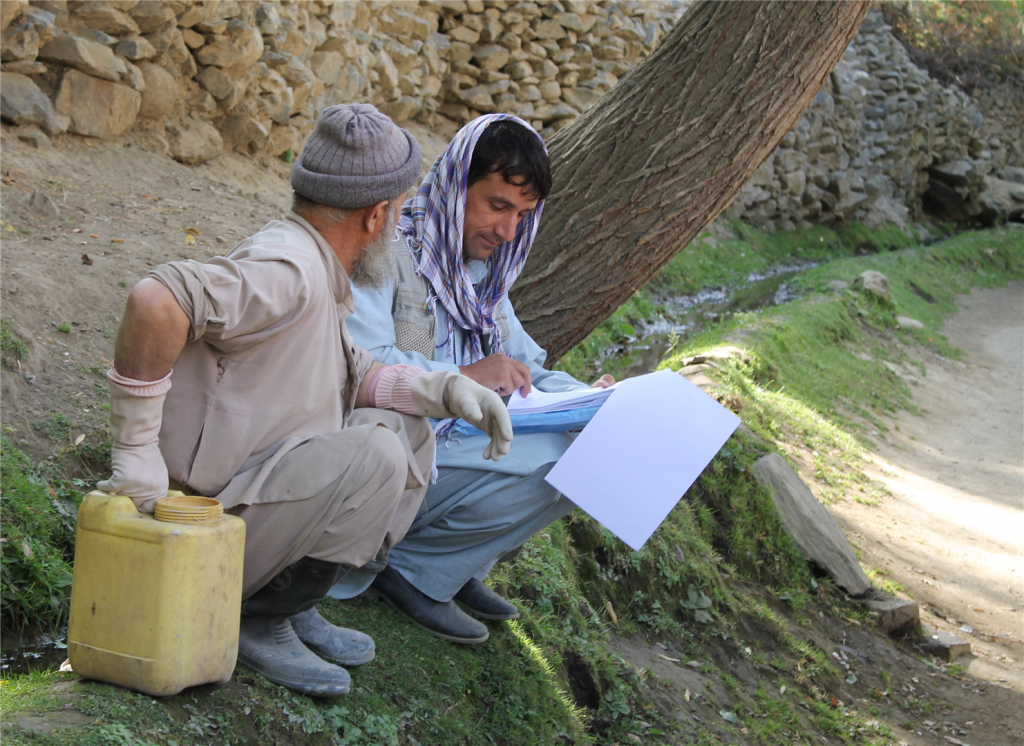 Enumerator from Berghof partner organization in Afghanistan interviewing a farmer.

Looking ahead, what are the new challenges and opportunities you see for conflict transformation and post-conflict transition?

For me two lessons sum up the things I have been talking about. One lesson is that it’s about more than the money. Plain vanilla grantmaking reduces the relationship with your grantee to a financial one, and then if you try to act as a partner, it doesn’t work. I think that at Berghof, we’ve understood that it’s also about networks, facilitation, process know-how and all kinds of things that we can provide. Money is a part of it, of course, but acknowledging the need for the operational side has been hugely beneficial, even though some people find it hard to understand because it doesn’t fit into any box.

The second lesson: try bold things. We’ve just been talking about impact measurement – there’s this tendency to transfer concepts from the business world to that of philanthropy, and that has led to a focus on scalable, linear models with a limited set of measurable variables. This has led philanthropists astray and they have started focusing too much on simple linear problems, while more important issues that are systemically complex and non-linear don’t get the attention that they deserve. Private philanthropy – unlike government – has the flexibility to address those hard and controversial issues. If that is lost, then a huge potential in terms of innovation and impact is lost, and nowhere is that truer than in the transition context.

The transitions topic is absolutely important, because this interconnected, globalized world is a world of extremes and there will be a lot of transitions to come. The good news is that, for philanthropists prepared to take bold risks, transitions offer the chance to be at your best and build the basis for more lasting peace.

I would also like to say that we should look beyond those post-conflict and post-authoritarian environments. I think that there is something in the transition idea that goes far beyond that. In our western democracies the legitimacy of political institutions is increasingly questioned. I wonder if current transitions, for example in the Arab world, are not part of a larger, more global phenomenon. While I am convinced that our democratic institutions are better equipped to deal with that, I think it’s quite possible that what we learn today in post-conflict environments could acquire a wider relevance for conflict prevention in other contexts.

The transitions topic is absolutely important, because this interconnected, globalized world is a world of extremes and there will be a lot of transitions to come. The good news is that, for philanthropists prepared to take bold risks, transitions offer the chance to be at your best and build the basis for more lasting peace.

Johannes Zundel is chair of the board of trustees of the Berghof Foundation, based in Germany, and established by his father, Georg Zundel, in 1971.