The death and re-birth of journalism? In Latin America, it’s a bit more complicated. There is in the United States a publication with an ominous masthead and an intriguing motto. The first is ‘Newspaper Death Watch’, the second: ‘Chronicling the Decline of Newspapers and the Rebirth of Journalism.’

I belong to a generation of journalists that has lived through this truly existential era.

As a Latin American baby boomer I well remember the epic deadlines at neurotic newsrooms, with the frenzied clatter of typewriters expressing the intensity of collective thinking, especially when game-changing scoops were in the works.

In comparison, the non-profit digital investigative journalism outlet where I am now editor has a tiny newsroom staffed by a few smart millennials and a fitness-conscious dinosaur. 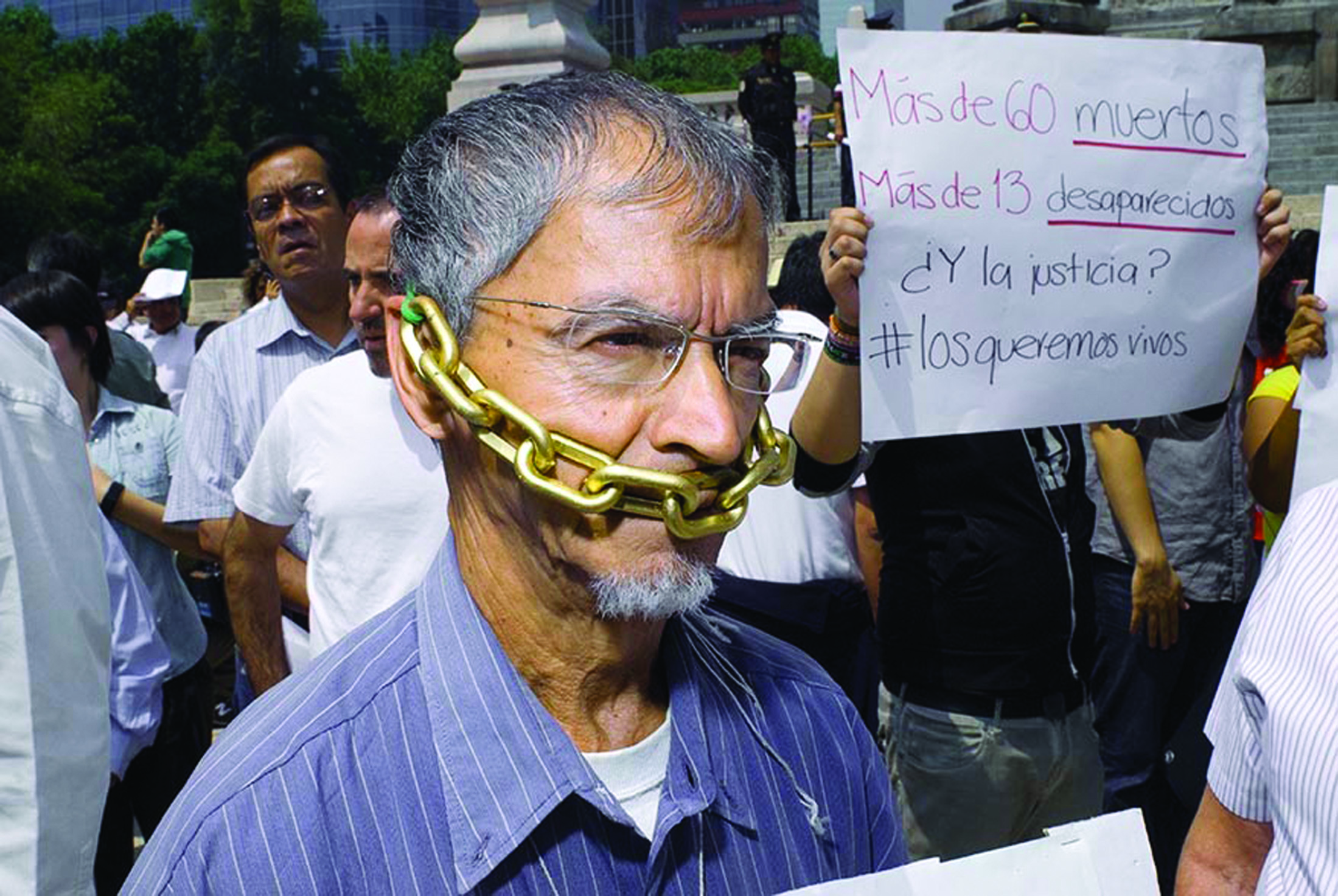 The issues are not new. In 2010 hundreds of Mexican journalists silently marched in downtown Mexico City in protest of the kidnappings, murder and violence against their peers throughout the country. Photo credit: Knight Foundation.

There is no longer the sound of thinking but a sense of compressed flow and once the scoop is ready, the return key distributes it at once; and a few minutes later the social networks, the other media, the readers begin to react to our content and we to interact with them.

Our reach is so much greater now than then and our production costs so much smaller that you wonder if we are living not the rebirth, but the reinvention of journalism… ‘up to a point, Lord Copper’, as they said in, well, Scoop.[1]

My nearly eight-year old publication, IDL-Reporteros, owes its existence and subsistence to philanthropy – to foundation grants to be precise. We compete yearly with a fast-growing field of other publications for funds that do not seem to grow at the same rate.

We have to be better every year in order to survive. But this is only part of the problem we face in this new, fast-changing, hard to predict ecosystem.

There is nothing wrong, in principle, with being funded by philanthropy, especially if your work is good and necessary. After all, some of the crucial works of western culture were made possible by the patronage of enlightened despots.

There is nowadays a measure of enlightened despotism in our relationship with foundations.

The thinkers and artists thus supported lacked – to use a code-word in today’s foundations – ‘sustainability’, but in the midst of often precarious and even dangerous circumstances, they had the means to create, and create they did.

There is nowadays a measure of enlightened despotism in our relationship with foundations. There are trends of thought, as happens elsewhere. Perhaps the most durable one is to wean publications from their funding as soon as possible. They are expected to find other forms of income, and to show they are trying, the sooner the better.

Some of these attempts are moving, others are funny, a few are moderately successful.

Overall, there is a great disparity between the consensus on the importance of free, investigative journalism for the health of democracy and the very small percentage of philanthropy allotted to support it.

But the whole process begs a question: wasn’t the reason for the existence of these non-profit journalistic publications (mostly investigative) the fact that in the traditional (or legacy) media, investigative journalism was being sacrificed to systemic decadence, distorted markets, and brainless cost-cutting to keep profits?

There are other problems as well. Some foundations might change their fields or interest from one year to the other; others might want to fund only investigations or stories in specific areas and no more, thus taking editorial decision out of our hands and making glorified consultants out of us.

Overall, there is a great disparity between the consensus on the importance of free, investigative journalism for the health of democracy and the very small percentage of philanthropy allotted to support it.

That being said, the impact of philanthropic funding for independent investigative journalism in Latin America has been enormous. It has allowed many journalists who, through their unwillingness to compromise principles had become unemployable, to continue serving their people with their work.

It shows that with more systematic support, free, independent journalism can do much more for democracy, the environment, human rights and the fight against corruption than what it has already achieved.

Not only that, most journalists in the new digital outfits knew each other. They often belonged to organizations such as the International Consortium of Investigative Journalists (ICIJ), cooperated together on regional or worldwide investigations on a scale never before approached (such as the HSBC or the Panama Papers cases), while having a resounding impact with their cutting-edge journalism in their own countries.

From Mexico to Argentina, small, mostly digital publications of elite journalists have been disproportionately represented as the authors of the most important investigative stories.

And, in a fast-growing, unexpected development, some traditional media have sought journalistic partnerships with them, thus cutting costs, profiting from journalistic quality while maintaining, just in case, a dash of deniability.

In the currently most important investigative story in Latin America: the Lava Jato mega-corruption case beyond Brazil, IDL-Reporteros organized a Latin America-wide investigative network made up of both journalists from non-profit digital publications and from nationally important newspapers, achieving smooth cooperation through cutting-edge investigation.

So this process in Latin America is slightly more complex, and rich, than one of births and obituaries.

In one of the more difficult areas in the world, it shows that with more systematic support, free, independent journalism can do much more for democracy, the environment, human rights and the fight against corruption than what it has already achieved.