Internal communications for philanthropy: Maintaining community in a time of isolation

What are the best practices for online giving? Here’s three from our research

In April 2016, the World Bank and WHO co-hosted a landmark event aimed at bringing mental health ‘from the margins to the mainstream of the global development agenda’. At the centre of the event was a report, Out of the Shadows: Making mental health a global development priority – which framed mental health as an urgent global problem requiring substantial philanthropic and governmental investment. The report’s arguments are compelling: mental health is the leading cause of disability around the world contributing to millions of premature deaths every year and an estimated 10 billion days of missed work. These problems can only be addressed – the authors emphasised – with a truly global outlook, given that 80 per cent of people with a mental health condition live in low- and middle-income countries. Many hoped that the Out of the Shadows event would turn the page on decades of underfunding and neglect.

Effective coordination requires development of an overarching strategy, based on evidence and a shared vision with the diverse stakeholders in the sector, from governments to philanthropists, to NGOs having clearly defined roles and responsibilities. 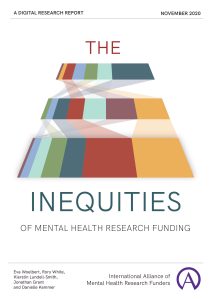 Yet, almost six years later, there is little evidence of change. According to the WHO, governments spend an average of just over 2 per cent of their healthcare budget on mental health – and a recent report by the International Alliance of Mental Health Research Funders (IAMHRF), The Inequities of Mental Health Research Funding, found that funding levels for mental health research have not increased since 2015, with only 2.4 per cent going to researchers in low- and middle-income countries. Meanwhile, as other articles in this special feature point out, mental health philanthropy accounts for an average of just 0.5 per cent of yearly development assistance for health. So why, despite the growing profile of mental health and the strong public health and economic cases for action, have investments not been forthcoming?