Case study – The Birds of Revolution

It wasn’t the ‘origami’ alone that triggered Naseej’s acceptance of Ossama Helmy’s application for a travel grant in 2010. It was rather a collection of values and practices that form an integral part of our working principles and overall social justice giving framework.

Ossama Helmy is a young Egyptian origami artist determined to introduce this foreign art to the Arab region. He has a deep conviction that it is one of the most powerful arts, able to transform people’s minds and hearts. While Naseej is not an arts organization, we strongly believe in the transformational power of ‘arts and culture’ among individuals and communities, and affirm it as a ‘holistic strategy’ in supporting change and advancing social justice.

When submitting his application to Naseej, Helmy said that for the past two years he had knocked on the door of many philanthropy organizations – including some in Japan, where this art originated – and was constantly rejected. The arts funders did not see it as an art project, while the social justice funders could not see its relevance to social justice. This is a challenge faced by most artists and organizations implementing arts and culture projects for social change, including us at Naseej.

However, Helmy’s application didn’t just fit in with our capacity-building and networking programme. As he was eager to build a real constituency, it also resonated with our concern for ‘neglected and underserved’ target audiences, which include young people, newly established community-based organizations, women and minority groups. 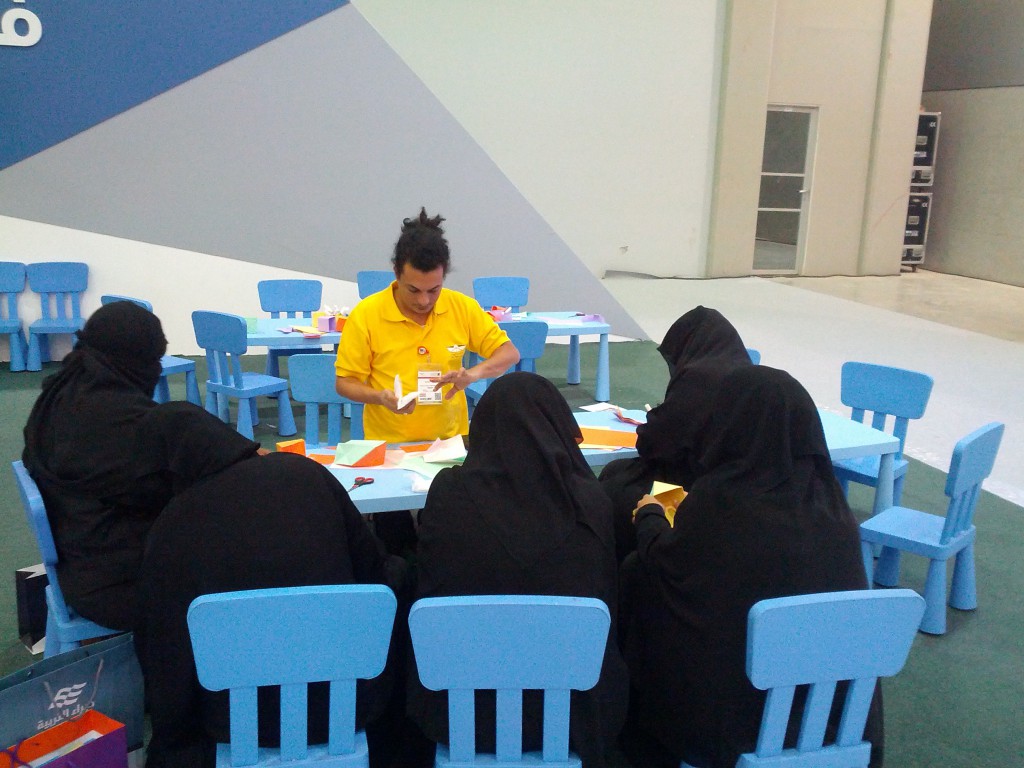 Ossama Helmy at an origami workshop in Saudi Arabia in 2012.

With the US$2,200 travel grant, Helmy spent 27 days in five countries (Lebanon, Syria, Jordan, Bahrain and Yemen) searching for origami lovers and origamists in an attempt to develop a network of ‘Arab origami artists’. During his trip, which he called ‘Fold with Us’, he worked with eight Naseej partner organizations and set up 25 origami workshops, involving 58 teachers and coaches and 340 children.

You can watch a video about the origami tour here:

Helmy established the Arab Origami Center in Alexandria in 2011, the only one of its kind in the Arab region. Through learning by doing and genuine hard work, often for very small fees, they have worked with children on issues like equity and acceptance of others and introduced teachers to innovative tools to stimulate students’ interest in learning, especially in maths and engineering. They have worked with young people, parents, disabled people, drug addicts, the elderly, artists, architects and others. To date they have reached more than 15 cities in Egypt and participated in forums and conferences in ten Arab and eight foreign countries, where they were invited to train, share their experiences and innovations, and network with others.

In 2012, Naseej provided another grant to the Arab Origami Center to implement the ‘Birds of Revolution’ project, which aimed to work with young Egyptians to emphasize the link between personal revolutions and national ones and their effect on justice and change – a project that was rejected by all other funders approached for the same old reasons.

Naseej acknowledges the challenge of supporting experimental, risky and/or what some funders consider ‘less serious’ interventions on ‘very serious’ issues. But we believe that unless we put our social justice values into practice, trusting in people and allowing them to lead, learn and experiment, we run the contrary risk of neglecting something whose impact on individuals and communities is proven.