Nothing ventured nothing gained

The word ‘risk’ derives from the Latin root ‘risicare’ – to dare. Foundations are often in the enviable position of being able to dare, yet many are too risk averse, only willing to fund the safe option with a high probability of success. While it is important to consider the probability of success of a funded programme or project, it is even more important to consider the positive outcome or impact of success. Increased innovation and creativity often goes hand in hand with greater risk of failure.

I was at a meeting recently where a foundation proudly announced that over 90 per cent of its funded projects were successful. Rather than the expected pat on the back, however, there was a strong view that the foundation was being too risk averse and was funding the safe bets. There was a clear message that it should remember the maxim ‘nothing ventured nothing gained’.

Most grantmakers say that they consider both the probability of success and the outcome of success. However, instinctively many, mindful of their stewardship role, err on the side of caution, which in turn creates undue focus on the likelihood of success. One way of forcing grantmakers to give greater weight to the outcome and impact is shown in the heat map below. 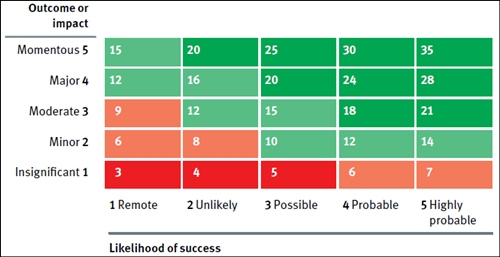 Here the outcome and impact of the funded project and the likelihood of its success are assessed on a scale of 1-5. Traditionally, each was given equal importance so that funding with a very high impact but a very low likelihood of success will have a risk score of 5 (5×1) as will funding with a very high likelihood of success and very low impact. But the heat map puts greater emphasis on impact, thus forcing funders to put greater emphasis on innovation and outcomes.

In terms of the map, funding decisions will be biased to scores in the green and light green areas rather than the red or light red ones. For example, the funder should be more ready to fund a programme that scores a 15 or 20 rather than 6 or 7 although the latter scores have a far higher likelihood of success.

Of course, across the funding portfolio a balance needs to be attained. Impact should be weighed alongside probability of success, the resource constraints and the risk appetite of the foundation. A more risk-averse matrix could be based on xy+y.

It is important to recognize that the message is not only to fund programmes or projects with significant outcomes but to reconsider the emphasis given to the outcome in proportion to the funding. Smaller grants, even those with smaller expected outcomes, still have an important place. The assessment must bear in mind the scale of the grantee and what it is trying to achieve. Thus a local community programme may have as much or more merit than a national or international one. Nor should the importance of core funding or funding for capacity building be forgotten as this could have a significant effect on grantees’ ability to achieve their objectives.

Of course, good grantmaking is more complex than simply making decisions based on a matrix of this kind, but the main message is that in innovative funding, failure is inevitable. The successful grantmaker is not one that avoids risks but one that understands the risks and rewards and weighs them up properly. This does not mean rash risk-taking but a renewed focus on creativity over predictability, evaluating both the potential upsides and the probability of success. Those making funding decisions must understand and consider the foundation’s risk appetite in relation to a number of factors including intangibles such as the leadership, creativity and capacity of the grantee.

Pesh Framjee is Head of Not for Profits at Crowe Clark Whitehill and a board member of the Institute of Risk Management. Email Pesh.Framjee@crowecw.co.uk