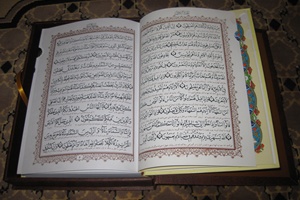 A core tenet of Islam

A number of verses in the Qur’an treat philanthropy as religious obligation, a smaller number speak of religious morality, and only a few directly concern social justice. According to the Qur’an and hadith, philanthropy is necessary for purification of one’s wealth and heart, as a sign of piety and evidence of faith, and as a right of the poor and destitute. Regarding the latter, in two different chapters the Qur’an says:

Another verse of the Qur’an says:

‘What Allah has bestowed on His Messenger (and taken away) from the people of the townships – belongs to Allah, to His Messenger and to kindred and orphans, the needy and the wayfarer; In order that it may not (merely) make a circuit between the wealthy among you …’ (QS 59:7)

And a hadith says: ‘… Allah has made it obligatory for them to pay zakat which will be taken from the rich among them and given to the poor among them …’

Islamic philanthropy is practised mainly through the institutions of sedekah (voluntary giving), waqf (a religious foundation or trust) and zakat (almsgiving). Zakat is the obligation for Muslims to contribute a fixed portion of their wealth to those in need.

The way individuals practise this depends on their interpretation of the Qur’an. Many variant readings are possible. However, two general perspectives can be identified, the traditional and the modern. Take, for example, verse 9:60 of the Qur’an:

‘Alms are for the poor and the needy, and those employed to administer the (funds); for those whose hearts have been (recently) reconciled (to Truth); for those in bondage and in debt; in the cause of Allah; and for the wayfarer.’

Traditional readings understand ‘those in bondage’ (Arabic riqab) in its literal sense of slaves, even though slavery in its classical form no longer exists. Modern readings interpret it as those living in slave-like conditions, such as illegal migrant workers or those suffering oppression and injustice. Similarly, the phrase ‘in the cause of Allah’ (Arabic fi sabilillah) can carry the traditional narrow meaning common in ancient texts, namely wars in the name of Islam. Modern Islamic thinking interprets it more generally as anything that benefits the general community. This could include establishing universities, funding research, supporting health and environment projects, and alleviating injustice. Traditionalists will understand ‘those employed to administer the funds’ (Arabic amil) as people, while for modernists these may include organizations.

Those who understand such verses in their literal, traditional sense attempt to emulate philanthropy as it was known in the time of the Prophet and the beginnings of Islam. This usually takes the form of giving to meet the short-term needs of particular beneficiaries. More modern readings understand such verses more in terms of the principles rather than the practices of the first Muslim societies, thus allowing philanthropic practices to follow the growth and development of modern society and attempt to redress its ills. The first interpretation leads to the practice of charity, while the second encourages philanthropic donations to long-term social justice projects. In brief, traditionalists are inclined towards a static, inward-looking Islam which perpetuates very specific and unchanging historical socio-religious practices, while modern interpretations see Islam as universal and outward-looking, evolving to meet the changing needs of society. It is from this view that concepts of philanthropy for social justice derive.

Contemporary Muslim scholars, among them Abdullahi Ahmed An-Naim, a professor of law in the US, propose a social justice-based model to revitalize and modernize philanthropy as a natural interpretation of the Qur’anic conception of social justice. They believe that the practice of Islamic philanthropy has become tradition-bound and does not fulfil the current needs of Muslim communities. However, the pull of tradition is strong, and charity rather than philanthropy remains dominant in Muslim societies.

In 2004-05 research into philanthropy for social justice carried out in six countries (Indonesia, India, Egypt, Tanzania, Turkey and the UK) showed the predominance of short-term charity. Even in a developed nation like the UK, the Muslim community generally gave their zakat and other donations through mosques rather than philanthropic institutions. Individual mosques tend to focus on their immediate community environment, and are structurally ill equipped to address deep-rooted social inequity and dysfunction. The donations (principally zakat) that they redistribute thus tend to address immediate symptoms and do little to advance the cause of social justice.

In some parts of the Muslim world modern institutions are contributing to social justice. In Turkey philanthropic (waqf) institutions have developed into modern foundations, and concepts of instrumental philanthropy have almost displaced those of philanthropy for personal salvation. In Egypt, the Maadi Community Foundation of Cairo has a programme which fosters religious pluralism to prevent religious conflict. In Indonesia, the world’s largest Muslim nation, philanthropy has grown in tandem with the growth of the professional middle class, particularly since the national reforms of the late 1990s. Increasing numbers of these are concerned with social justice issues, and do not see philanthropy across religious divides as problematic. They want their philanthropy to have lasting benefit, while their business sense encourages them to value institutional professionalism, transparency and accountability. Research results show that philanthropy for social justice has a healthy potential for greater development. While its overall scale remains relatively small, it is growing steadily.

Social justice concepts are not new to Indonesia. ‘Social Justice for all Indonesians’, not merely ‘giving to the poor’, is one of the national ideals embodied in the nation’s five-point national ideology (Pancasila). Dompet Dhuafa, Indonesia’s leading Islamic philanthropic institution, collaborates with Indonesian Corruption Watch on anti-corruption programmes. Its other projects include funding research, university journals and academic conferences, and working with secular NGOs on environmental projects and advocacy for healthy food.

A core tenet of Islam is that it should bring blessing and benefit to the whole world. While those who prefer a traditional, pre-modern interpretation of the Qur’an may have difficulty in accepting and implementing this universalism, it is entirely consistent with considered and contextual readings of the Qur’an and Prophetic Tradition. Philanthropy for social justice is a logical outcome of such readings, and is a growing phenomenon in Muslim society.

Amelia Fauzia is an expert on Islamic philanthropy and Islam in Indonesia, working as lecturer at the faculty of Arts and Humanities, State Islamic University Syarif Hidayatullah Jakarta. Email amelia_fauzia@yahoo.com