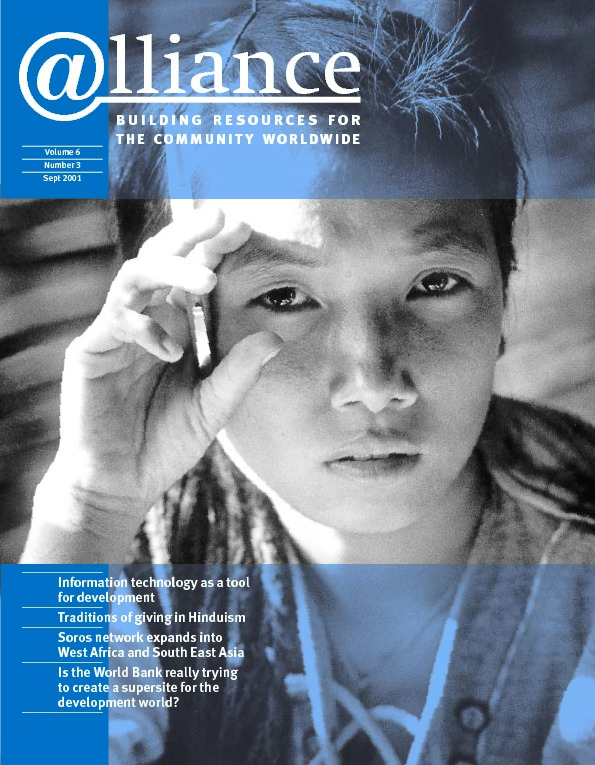 West Africa and South East Asia don’t spring to mind when one hears the name George Soros. Yet these newest areas of Soros activity reflect the Soros foundations network’s commitment to promoting and facilitating open societies in the countries and regions that need it most. This expansion also shows a strong interest in providing seed grants to establish programmes in new areas before much of Soros’s funding comes to an end in 2010.

The Soros network launched the Open Society Initiative for West Africa last year. Based in Abuja, Nigeria, it will serve 18 countries in the region. By funding start-up projects, developing partnerships with other foundations and international organizations, and making grants to local NGOs, the initiative aims to strengthen civil society and democracy in the region. Reconciliation and conflict resolution, public health, community radio and library modernization will be key areas of activity.

Indonesia is the central focus of another main Soros effort, the Southeast Asia Initiative. Tifa, or ‘drum’ in Indonesian, is an independent foundation, which will receive limited support from the Open Society Institute (OSI) to help introduce OSI programmes into Indonesia. Working with a variety of already established local, regional and international partners, the initiative will support programmes for independent media, legal reform, women’s rights and civil society development.

These initiatives are just two more steps in an ongoing process of taking Soros philanthropy beyond Central and Eastern Europe and the countries of the former Soviet Union. Since 1996, OSI has supported a variety of programmes in the United States. In 1993, the Soros network established a foundation in South Africa, followed by the Open Society Initiative for Southern Africa in 1997. The Burma Project, based at OSI New York, was founded in 1994 to increase international awareness about conditions inside Burma and help the country make the transition from a closed to an open society. And in June 2000, the Soros network agreed to support the NGOs participating in a new intergovernmental body, the Community of Democracies (CD). CD, which is committed to the promotion of free media, multiparty elections and respect for minority rights, was initiated by Poland and the US and is directed by a steering group that includes Chile, the Czech Republic, India, Korea, Mali, Portugal and South Africa.

The bulk of Soros network activities continue in the countries of Central and Eastern Europe and the former Soviet Union (see 2000 expenditures box), yet changes are occurring here as well. In countries such as Poland, the Czech Republic and Hungary, where democratic political structures and economic reforms are well established, Soros foundations and programmes are increasingly addressing long-term policy issues such as EU accession. The foundation in Slovenia finished its work in 2000.

In areas that are still undergoing political transition or recovering from conflict like the Caucasus or South East Europe, the Soros network continues to support a wide variety of programmes. The New York-based Central Eurasia project works with Soros foundations and local NGOs in the region to promote the rule of law, the free flow of ideas and information, women’s rights and ethnic tolerance. The project also maintains one of the most comprehensive and authoritative websites on the region, http://www.eurasianet.org. The Soros network remains heavily involved in the Stability Pact process for South East Europe, particularly Working Group One, which focuses on human rights and civil society issues.

So what of the future of the network? George Soros said in 1997 that much of his funding would come to an end in 2010: his goal was never to establish a network of programmes and foundations completely dependent on one individual. OSI President Aryeh Neier, writing in the network’s 2000 Annual Report, remarks: ‘Our hope is that … the essential programmes of the foundations network will be able to continue without Soros support. An important criterion for measuring our success will be the extent to which that goal is reached.’

For more information about the Soros foundations network, visit the website at http://www.soros.org