Sustainable public transport for all

Founded in 2001, with an initial investment from the Shell Foundation, EMBARQ – the World Resources Institute Center for Sustainable Transport aims to catalyse environmentally and financially sustainable solutions to pollution, traffic congestion and other transport-related problems in cities in developing countries. After seven years of operation, it had already leveraged some $16 million in grant money into $886 million in projects that have provided high-quality, affordable public transport in some of the largest cities of the developing world. By early 2010, EMBARQ had the support of three major foundations – Shell Foundation, Caterpillar Foundation and Bloomberg Philanthropies – each providing multi-year, multi-million-dollar support.

EMBARQ’s vision was expansive and bold – a world where affordable, healthy and environmentally sustainable transport is available to everyone. To this end, it committed itself to delivering measurable outcomes in at least three major cities in the developing world in the first five years. The first city partnership, launched almost immediately, was with Mexico City, followed by Porto Alegre (Brazil), Shanghai, Istanbul and many others. The idea was that success would generate interest from other cities facing similar challenges. 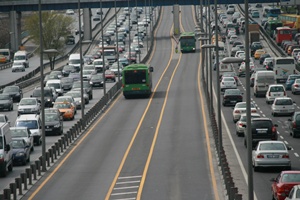 What happens when EMBARQ is successful?

In Mexico, the idea of sustainable urban transport has definitely caught on. Mexico City’s Metrobus system moves over 420,000 passengers a day, saving some 80,000 tons of CO2 per year, reducing commute time by an average of 30 per cent and avoiding 7,700 workdays lost to illness from air pollution. On the back of this and a similar experiment in Guadalajara, most major cities have announced plans, or are seeking financial support, for one or more initiatives, whether with EMBARQ and its local affiliate or with other partners such as FONADIN, a Mexican infrastructure bank, the World Bank or the Inter-American Development Bank. EMBARQ estimates that in Mexico alone, some 34 cities could have BRT routes stretching 1,834 kilometres. The potential CO2 reduction would be between 25 and 40 million tons per year.

In Istanbul, the BRT corridor that crosses the Bosphorus cuts travel time for its riders in half, although congestion on the bridge is at times so severe that the BRT lane is saving much more than that. CO2 savings are estimated at 100,000 tons a year and local air pollutant reductions are similar in magnitude to those achieved in Mexico. Turkish cities such as Antalya and Izmit are now interested in BRT and other sustainable mobility options, suggesting again the demonstration effect of success in an iconic city like Istanbul.

What EMBARQ brings to the problem

EMBARQ’s diagnosis of transport problems in cities reduces in most basic terms to a classic market failure. The individual incentives of decision-makers, solution providers and financiers were all leading to supply-driven, sub-optimal transport. Service quality was poor, air quality was suffering, GHG emissions were climbing fast, traffic congestion was worsening, and crashes and human injuries were unacceptably high.

EMBARQ acts as an honest broker between government decision-makers, investors and urban transport providers. It combines its independence, multidimensional technical expertise and track record of high-impact projects to create demand for sustainable transport solutions that integrate economic, urban development, air quality, climate change, health, safety and mobility considerations. EMBARQ can also fund some elements of a project in the earliest stages, both to get the project structured correctly and to prove its value to the city. Since it frequently recommends novel or risky alternatives, the trust engendered by this means is extremely valuable.

Staying power is equally important to successful projects, especially big ones. Things can go wrong anywhere along the lifecycle of a complicated project like a BRT. EMBARQ and its affiliated centres have enough working capital to stick with a project and frequently have much more experience than the city of planning, implementation and early days of operations of a first BRT corridor.

Reconciling the demands of different partners

BRT systems offer a variety of benefits over other forms of transportation: more rapid and flexible installation, lower capital investment needed, and a lower cost per passenger journey. The concept has long been proven in cities such as Curitiba, Brazil, and Bogota, Colombia. However, take-up of the idea has been limited. EMBARQ’s experience suggests two possible reasons for this.

A problem EMBARQ encountered very early was the difficulty of producing measurable results from projects involving competing and powerful interests. Cities are difficult partners. Mayors and their cabinets are accountable to many stakeholders, and NGOs, even those that come with a few million dollars, are low on the list. At best, EMBARQ and its local centres have developed uneasy alliances with city leaders.

In response, EMBARQ devised a portfolio approach to measure performance indicators and outcomes. Instead of trying to deliver a particular project in a particular city within a fixed time (which would have been impossible), managers took responsibility for achieving targets across the network as a whole. This approach worked: EMBARQ was able to deliver its key performance indicators (KPI) and outcomes ahead of schedule and with less grant revenue than predicted.

A second potential stumbling block is the availability and cost of capital. Cities and private concessionaires often make higher annual debt service payments on their BRT projects than necessary; in other cases, they do not build until they have raised the entire capital needed without borrowing, as was the case with the first Metrobus corridor in Mexico City. EMBARQ projects in Porto Alegre, Brazil, and Queretaro, Mexico, were well structured with manageable risks, but financing was slow to come or not available.

What is missing from the sustainable mobility ecosystem is an entity whose role is to marshal funds dedicated to financing a new class of investment – sustainable urban mobility – from the long-term, fixed-rate investment community, such as pension funds.

The question of whether to try to bring international financing to its project and whether to charge a fee for doing so has exercised EMBARQ over the last year. Preliminary market research suggests both are possible, but a fee-based financing service might be confusing to EMBARQ’s clients and partners and be difficult to manage alongside its grant-based services.

Consistent with the long-term and strategic nature of their partnership as co-founders, EMBARQ and Shell Foundation have decided to explore creating a separate sustainable mobility project financing group, which could serve both EMBARQ and its local affiliates, as well as other clients. The new entity will aim to get future project sponsors comfortable with the idea of new forms of international financing – aside from the traditional multilateral development bank financing, which has it limits – at the same time as introducing the financial community to BRT as a new class of investment.

What have we learned about sustainable urban transport?

Sustainable urban transport projects require strong leadership, good project management skills and highly specialized technical expertise. And money. At least one of these factors is typically missing in the markets where EMBARQ works. EMBARQ has demonstrated that it is possible for an outside entity to act as a catalyst, align interests across a municipal government, and keep the momentum going through the life of a long, complex and politically precarious process.

The catalytic effect appears to be greater the further upstream EMBARQ and its local centres have influence. Project opportunity framing at the earliest stage of a project, for example, saves time and money along the rest of the project’s lifecycle by ensuring the partners are all working towards the same goal, identifying the most critical decision points, and building in periodic value assurance reviews. The framing workshops also serve as a team-building exercise for the core partners in the project.

The demonstration effect is vital: success in Mexico City, Istanbul and elsewhere attracts the attention of new partners and new investors/donors. Conferences, training workshops, videos, websites and other materials all help get the message out and increase confidence in sustainable mobility solutions.

The project planning, management and technical assistance that EMBARQ brings to the partnership both increase the likelihood of success and make the project more bankable. There is a large, new investment class – BRT – that would benefit from the participation of private international investors and would yield the triple bottom line results that many socially responsible investors have been seeking, but at a larger scale than has so far been realized.

Nancy Kete was executive director of EMBARQ from 2001 until May 2010. Email nkete@mac.com