Towards an understanding of civil society in the Arab world

This past summer hundreds of thousands of Israelis took to the streets demanding social justice. While the Palestinian citizens of Israel were minimally present, and issues related to Israel’s occupation of the West Bank and Gaza almost completely absent, the protests have nevertheless put social justice on the agenda, if not yet social justice for all. Given Israel’s uneasy position within the Middle East, it is interesting to look at this protest in the context of the Arab Spring.

The protest began when several young people set up tents in central Tel Aviv in protest at the high cost of housing. The initiative quickly gained momentum: hundreds of people joined this first tent encampment and similar tent camps sprang up in dozens of other cities throughout Israel. The subject of the protest also expanded to a broader call for social and economic policies that respond to the hardships of the lower and middle class in various spheres: high prices, low wages, poor quality of infrastructure, healthcare, education and other government services, privatization and tax reform, to name just a few of the issues raised.

The tent camps created a new culture of debate, and became a centre for public discussion and activism. Every evening large circles of people would form to debate Israel’s economic policies. The anarchic nature of the movement gave voice to a broad spectrum of issues. Single mothers, medical interns, consumer rights activists, environmental activists, animal rights groups and many others organized protests, discussion circles and other activities within the context of the broader movement.

Links to the Arab Spring

As in Tunisia and Egypt, the rapid spread of the Israeli movement and its unprecedented magnitude took everyone by surprise. In fact, there are many elements of the protest that evoke the Arab Spring, both in form and in content. Certainly the timing cannot be attributed solely to coincidence. Protesters themselves referenced the Arab Spring; the most popular chant of the weekly marches (‘The People Demand Social Justice’) echoes a popular Egyptian chant, and protesters held signs that proclaimed: ‘Tahrir Square is Here’ and ‘Walk Like an Egyptian’.

However, Arabs themselves were largely absent from the Israeli protest. Palestinian Arabs constitute some 20 per cent of Israeli citizens (as distinct from the Palestinians in the West Bank and the Gaza Strip). Arab citizens are marginalized from most aspects of public life and suffer disproportionately from poverty and lack of access to basic services. For this reason, equality for Arabs is an important component of any broad demand for social justice. This is particularly the case considering that housing rights, the initial rationale for the protest movement and a central demand of the protestors, is an area where Israeli Arabs suffer particular discrimination, whether it be overcrowding and discriminatory urban planning or the specific problem of ‘unrecognized’ Bedouin communities who receive no government services and face a constant fear of evictions. 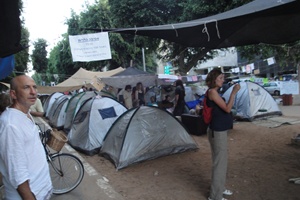 Several Arab communities did set up a protest tent encampment, and in the larger cities there were groups of Jews and Arabs who made equality part of the broader protest. Some of the weekly rallies held in various cities throughout the summer included an Arab among the speakers. There were also some initiatives to use the tent camp discussion circles to highlight the unique problems of Palestinian citizens of Israel. On the whole, however, most commentators agree that Arabs and their issues were marginalized in this movement.

And if Palestinian citizens of Israel were only minimally present in the protest movement, the issue of Israel’s occupation of the West Bank and Gaza was almost completely absent. Several of the organizers acknowledged a conscious choice to avoid such ‘divisive’ issues, preferring to build a movement that unified diverse segments of Israel’s (ie Israel’s Jewish) population.

Despite this criticism, there are many interesting and encouraging elements within this social protest. First, insofar as it was even partially inspired by the momentum of the Arab Spring, it has – perhaps for the first time – firmly located Israel as part of this region in a positive way. More importantly, in a country where virtually everyone has been touched by the violent conflict, making security concerns paramount, a mass movement devoted to domestic economic and social issues is unprecedented.

Late in the summer, there was a series of attacks in the south of Israel in which a Palestinian/Egyptian armed group killed eight Israelis. In response, Israel bombed and shelled targets in the Gaza Strip, killing 26 Palestinians, as least 12 of whom were civilians who took no part in the hostilities. Palestinian militants in Gaza in return fired rockets into southern Israel, killing a man. This horrific pattern is sadly familiar to Israelis and many assumed that this would be the end of the social justice protest. Too often in the past, in the face of security concerns, Israelis ‘circle the wagons’, support the current government policies and silence any other agenda. However, this was not the case this time. After three days of silent protest in solidarity with the victims of the attack, the social justice protest resumed. Even in the southern city of Beer Sheva, where a rocket from Gaza had just killed Yossi Shushan, Israelis resumed their protest on behalf of economic justice.

For years I saw the two biggest challenges for the Israeli human rights movement as public apathy and the common wisdom that all other agendas must take a backseat to security concerns. This summer was an unequivocal rejection of both these phenomena. So while this social justice movement has not embraced social justice for all, it has succeeded in creating a new generation of activists and a refreshing new approach. This presents an opportunity for organizations like B’Tselem, which works to engage Israelis in discussion and action on behalf of Palestinian human rights.

The philanthropic community had long supported the issues at the centre of the social protest. Organizations received grants to research the implications of privatization, to advocate for public housing, public education and public health, and to litigate against discrimination and injustice in resource allocation (to name only a few of the ways Israeli organizations have worked for years to promote social and economic justice). Throughout the summer, these organizations mobilized to assist and magnify the protest.

However, the diffuse structure and non-traditional tactics of this new movement posed a challenge for traditional philanthropy. The New Israel Fund was one foundation that rose to the challenge, providing financial support to the tent encampments and the leadership, particularly in peripheral areas.

It is too early to tell whether this Israeli protest was a short-lived phenomenon or a movement that will successfully build on its momentum. In any case, the events of this summer clearly demonstrate the value of investing in outreach to the Israeli public with a message of social justice for all.

Jessica Montell is executive director of B’Tselem: the Israeli Information Center for Human Rights in the Occupied Territories. Email jmontell@btselem.org