A famous Kiswahili saying ‘kidole kimoja hakiuwi chawa’ – a single finger alone cannot kill a louse – mirrors some recent reflections on the Millennium Development Goal (MDG) achievements and challenges. Governments wouldn’t effectively achieve development goals without other development actors – the private sector and civil society. This led to the development of the post-2015 Sustainable Development Goals (SDGs), now expected to raise consciousness among multi-stakeholders, on the need for working in partnerships for greater and sustainable impact.

From the establishment of the Kenya Community Development Foundation (KCDF) 18 years ago, it was paramount for us to team up with credible, well- motivated community organizations to achieve our mission of ‘promoting sustainable development of communities for social justice through institution building, partnerships, resource development and policy influencing’.

We began in the late 1990s with a strong emphasis on supporting capacity-building efforts for partner organizations that shared our belief in community-driven development. This work gained a deeper rationale, as we began asking the question ‘capacity building for what?’

This question led to expanding the resources that grassroot organizations could apply to day-to-day issues communities cared about, such as education, health, water, food security, with a strong bias toward vulnerable groups like children, women, youth and differently-abled persons.

It became clear that fundamental policy issues needed to be addressed to ensure such groups were accessing resources from the government, and to enable them to influence the emerging policies and resource allocation for more sustainable impact. Engaging government departments also called for an organized civil society, which was not easy to achieve because non-profits tend to operate in an uncoordinated manner. We found it important to support the growth of networks for the wider sharing of lessons and experiences among like-minded foundations, development partners and local CSOs, as well as working to influence government in a more organized way.

KCDF even had to assign dedicated staff to this emerging work, rather than to grantmaking efforts. Hence, during the preparation of the 2014–2018 strategic plan, the KCDF board and trustees agreed to revise the mission statement to reflect the commitment to partnerships. The evolution, in our case, has gone hand-in-hand with a belief that Kenyans have the human and financial resources to mainstream the concept of local giving and growing community assets. KCDF has a total of 27 local community groups who have grown small community funds or endowments that they invest through the foundation, currently estimated at about $1.5 million.

‘Many groups also rely on community philanthropy for projects they care about, such as the generation of solar energy to increase learning opportunities for children in remote rural schools.’

Many groups also rely on community philanthropy for projects they care about, such as the generation of solar energy to increase learning opportunities for children in remote rural schools, building feeder schools in areas where the official schools are located far from villages, or even building health facilities close to villages. Such an approach is based on our core belief that everyone has something to give, which leverages Kenyan traditional giving patterns. 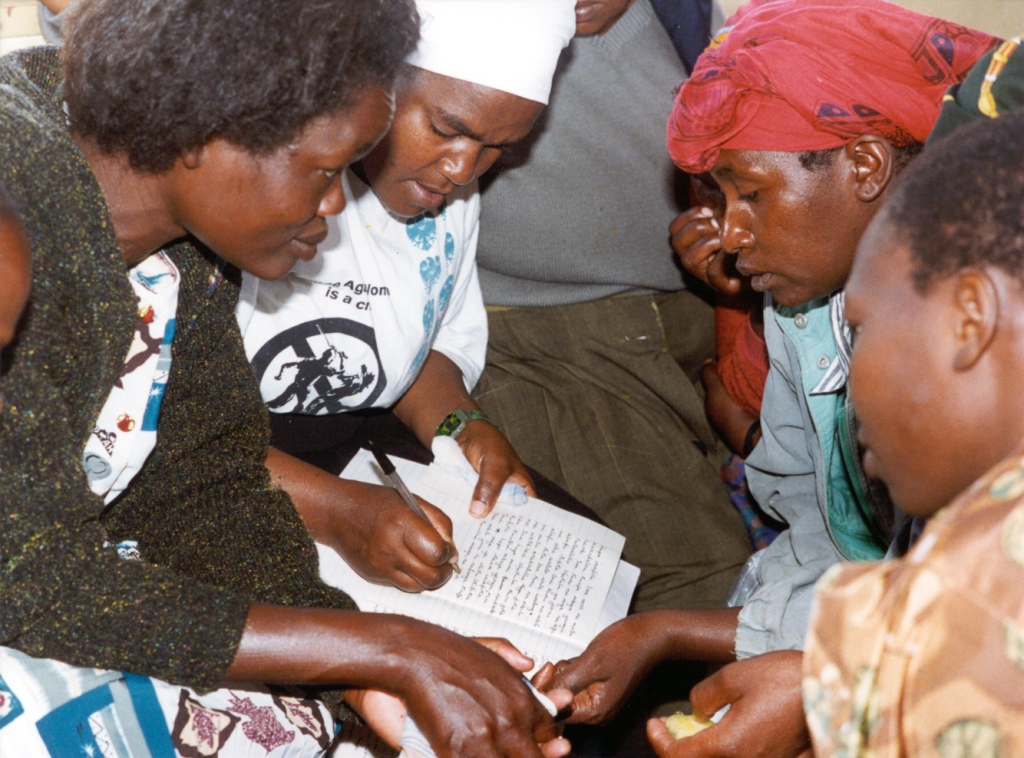 KCDF supports a variety of community-organized groups registered as NGOs or community-based  organizations who share our mission and values for community empowerment. They are working in line with SDG priorities and focusing on initiatives that contribute to poverty eradication, improving the quality of life for communities, environmental conservation, and youth development, for example. This work capitalizes on partnerships with the private sector and local county governments.

Building on its past experience, KCDF is now moving from making small grants to individual organizations to working with groups on a joint strategy to influence the social and economic impact in a geographical area.

K-JOIN is one such initiative, which KCDF is supporting in Nairobi’s Kibera slums. Six organizations have come together to transform the lives of 2,000 households in two villages by promoting access to credit, and enterprise development among women and youth. The communities are also engaging policymakers in creating an environment conducive to business development. The work has enabled these organizations to collaborate, plan together, share data and learn from each other.

‘Stronger grassroots actors increase the confidence of communities who are more willing to invest their own resources, as well as county governments and  local private-sector actors.’

Strengthening the institutional capacity of local organized groups is another approach that KCDF has found essential in promoting partnerships. Stronger grassroots actors increase the confidence of communities who are more willing to invest their own resources, as well as county governments and  local private‑sector actors. 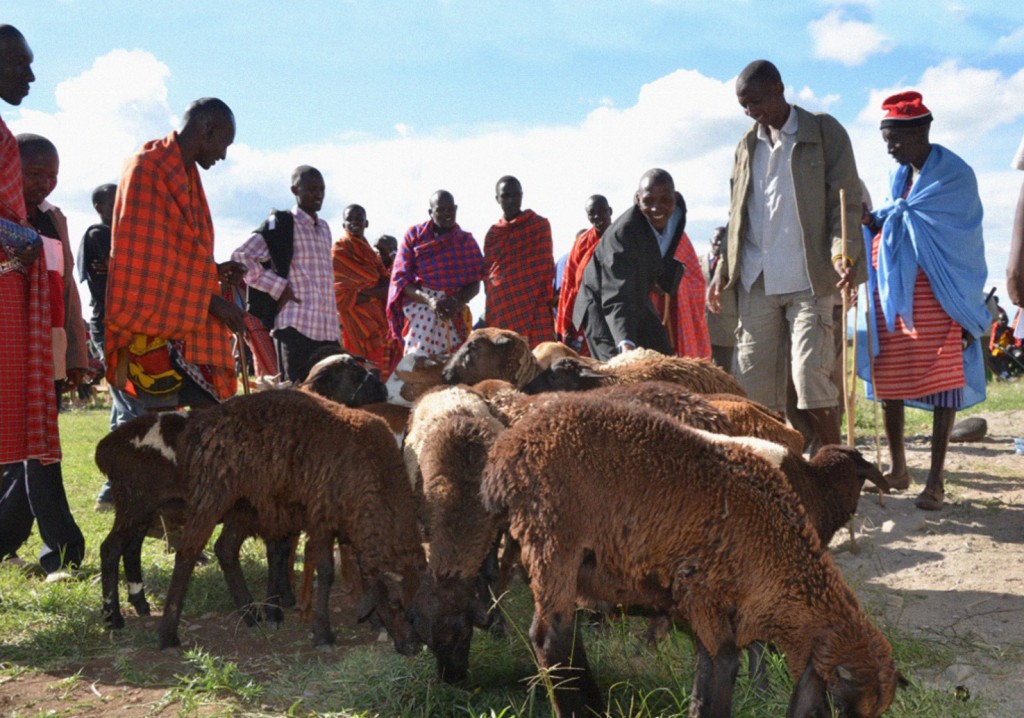 With support from KCDF, the Nkoilale Community Development Organization (NCDO) arranged a local resource mobilization drive – the community donated livestock to fundraise for the development of classrooms. Credit KCDF

We invested grants and human resources over two to three years to build the Nkoilale Community Development Organization, enabling it to build four feeder schools to reduce the distances covered by young school-going children, as well as mitigate deaths caused by roaming wild animals in the Maasai Mara area. The nearby Maasai community sold some animals to raise $6,000 to build a school. They also raised $2,000 from the camps and lodges within the Maasai Mara park. This intervention has greatly improved access to quality education in the region, which was a huge challenge. The Ministry of Education has since recognized the school and the Narok County government has committed to building more classrooms.

Community philanthropy built the ability of local groups to better organize themselves while boosting their capacity and accountability, contributing to richer partnerships completely owned by residents, with a long-term impact.

Other partnerships: KCDF also works with national networks and coalitions. Our local resource mobilization work has brought us into close collaboration and partnerships with corporate foundations such us Safaricom Foundation, KCB Foundation and Equity Foundation, as well as with a selection of private sector companies with corporate social investment programmes. KCDF acknowledges that different actors bring different skills and interests in responding to development needs, and has, therefore, focused on ensuring that partnerships are strategic and diverse.

Through these partnerships, KCDF has learnt a number of lessons in seeking to establish philanthropy, address emerging challenges, and work for greater impact. A few are highlighted below:

Working in partnerships will increase SDG achievement more quickly than through any approach by a single actor, including the government. Different actors also increase the diversity of approaches and innovation, which is likely to lead to more lasting impact. Partners do what they are good at. KCDF is committed to continue walking on this path, despite its challenges.

Working together to create an impact
KCDF in partnership with other foundations has this year initiated the formation of the Kenya Philanthropy Forum as a mechanism that seeks to:

The forum has initiated discussions on how it can effectively support the implementation of the SDGs in Kenya, especially in line with Goal 4 on education, where most Kenyan foundations have made significant social and economic investments.

These partnerships provide opportunities to not only support SDG policy development but also to avail more resources towards meeting the SDGs.