The role of government

Government has a major role to play in ensuring access to energy and lighting throughout India. At the national level, the government of India is officially committed to ensuring that every household in India has electricity by 2012. This is a daunting target, and I met no one in India who thought it could be met. At the state level, a new chief minister has transformed perceptions of Bihar, until 2005 seen as a place where no one could do business. Government also has an important regulatory role to play (see Challenges for entrepreneurs).

When Simon Desjardins and I visited the Ministry of New and Renewable Energy (MNRE) in Delhi, whose broad aim is to develop and deploy new and renewable energy to help meet the country’s energy requirements, the people we talked to were, not surprisingly, reluctant to say whether they thought the government’s energy targets could be met. Nor were they willing to say whether having a few hours of electricity a day at an unpredictable time would count as meeting the target. But all showed enormous faith in Husk Power’s ability to contribute to solving the country’s energy deficit. ‘Cloning’ Husk Power seems to figure high on their list of strategies. ‘We need more Mr Pandeys,’ said MNRE Secretary Deepak Gupta.

MNRE does offer a generous subsidy for biomass gasification and other electrification projects, presumably designed to encourage the clones, but at this point it seems that Husk Power is the only organization actually receiving any substantial subsidy, and payment is often very delayed. D K Khare, the MNRE director responsible for biomass gasification projects, pointed to piles of dusty files all around his office. Some of these, he said, contained relevant project proposals, including a project for using pine needles to provide access to electricity for local communities, which several people told us about. ‘The sky is the limit in terms of money,’ he assured us, but at present the money scarcely seems to be leaving the Ministry. 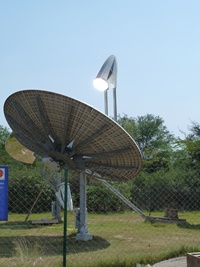 S K Singh, director of MNRE’s Solar Energy Centre (pictured), was very supportive of Gyanesh Pandey as he adapted existing gasifier-based generating systems to use rice husks, but his energies are now focused on high-tech solar solutions such as the parabolic dish collector pictured here. This impressive-looking piece of equipment receives direct radiation from the sun and concentrates it into a thermal receiver. The trouble with projects like this is that deployment is some way away, and may or may not be successful when it does take place. Where Husk Power scores so highly is that it already has around 65 plants running and is ready to scale.

While the MNRE undoubtedly has a daunting task, its strong subsidy policy needs to be backed up with awareness-raising activities aimed at attracting new entrepreneurs to the sector.

Winds of change in Bihar?

‘Who’d want to do business in the armpit of India?’ This and similar comments sum up the general view of Bihar as it used to be. But the consensus is that the situation has changed dramatically with the accession of a new chief minister in 2005. (Unfortunately, we were unable to interview him.) According to Ingrid Srinath of CIVICUS: ‘The entire paradigm on Bihar has shifted substantially. The state has long been synonymous with apathy, stasis, corruption, criminality and caste divisions. This government appears to have transcended these to the point where Bihar is now seen as transformed by citizens, business and media alike.’ Sheela Patel of Mumbai-based NGO SPARC believes a visit to Bihar gives you ‘a feel of how state leadership transforms development investments. The present chief minister has done that.’

But Karthik Chandrasekar of Acumen Fund has reservations. ‘If you look at the diaspora from Bihar,’ he says, ‘you see some of the biggest names in Silicon Valley and some of the biggest chaps across India. They want to come back to Bihar, so potentially there’s plenty of capital available for the state. I’m not sure if it’s justified, but there are expectations of corruption. So, if we want the general attitude towards Bihar to change, we need more clarity and openness, making it clear what the state is open to.’