Want to be big? Go small

South Africa’s Federation of the Urban Poor (FEDUP), founded shortly after the country’s first democratic elections in 1994, consists of groups of mainly poor women who save small amounts of money daily. These groups have built over 15,000 houses. But in a country where the more than 2 million houses built by the government have barely put a dent in the housing backlog, going to scale as a social and developmental movement is still a monumental challenge. So these groups of women are joining hands with leaders of informal settlements throughout the country to pioneer an unexpected way to go big. Go small.

The Informal Settlement Network (ISN) was established in the latter part of 2008 and early 2009 in the country’s five biggest metropolitan municipalities: Johannesburg, eThekwini (which encompasses Durban and its surrounding areas), Cape Town, Ekurhuleni and Nelson Mandela Bay (Port Elizabeth), as well as in the smaller Sol Plaatje municipality, which includes the diamond mining city of Kimberly. This is the first major attempt in the democratic era to bring the country’s disparate settlement-level and national-level organizations of the urban poor, so effective at the core of the civics movement which helped bring down Apartheid, under one umbrella.

Putting the urban poor at the centre of their own development

The network is not just about moral solidarity among the urban poor. It is paving the way towards incremental development that leverages up to the ever-elusive holy grail of urban development: scale. This kind of model is being employed to increasing effect within Shack/Slum Dwellers International, the global network of national-level federations of the urban poor. Their answer to the question of development at scale is unequivocal: put organized communities of the urban poor at the centre of their own development.

Informal settlement upgrading – improving basic services and more secure land tenure – is only now becoming a focus of urban policy, with government and other practitioners realizing the futility of a single focus on providing serviced land with a full top structure (a ‘formal’ house) to every South African. Last year, the national Ministry of Housing changed its name to the Ministry of Human Settlements to reflect this shift. But so far local governments have done little in the way of incremental upgrading on the ground.

The ISN has been organizing in ways that place it in prime position to put people at the centre of significant upgrading strategies. In Cape Town, eThekwini, Johannesburg and Ekurhuleni, the ISN has undertaken or is undertaking surveys of all informal settlements. Armed with information about the different kinds of needs in settlements throughout a given city, the organizations affiliated to this network have begun to implement pilot upgrading projects that can inform policy and practice based on experience.

In Cape Town and eThekwini, where the pilots are already under way, partnerships with local government are a significant part of the process, geared towards ensuring that policymakers and implementers work with and learn from the communities where these pilots take place. 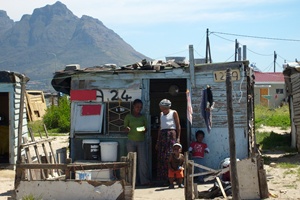 In fact, the partnership between the Cape Town municipal government and the local ISN came about because of this kind of learning. In March 2009, fire destroyed over 100 shacks in the Joe Slovo informal community (pictured), the object of a government redevelopment project that had become a byword for inefficiency and corruption. The community mobilized to ‘block out’ the settlement into lanes that would make it more resistant to such widespread damage from fires in the future. Word of the project spread and municipal employees came to see what had happened. Within months the local government was working with ISN to pilot ten upgrades in settlements throughout the city.

Each informal settlement has its own needs and challenges so, as a first step in any pilot, the community will survey itself, collecting a wide range of information on social indicators. Residents collect their own information, set their own priorities for upgrading, and cohere around these issues. This kind of community organization is central to the implementation of projects that address their priorities.

Starting at the bottom

Going to scale, then, is an outcome of constant interaction between information gathering, mobilization of savings, community organization, engagement with government and increased learning for communities and politicians alike. It all starts at the bottom – at the individual settlement level. Settlement organizations then engage with each other in networks to set priorities at a level that addresses the municipal government’s need to work city-wide.

For the impact to be big, a project has to start small. Each settlement community has to be engaged around its own issues and organized to implement its own solutions. Partnerships with government, bilateral and multilateral donors, as well as private institutions, help provide finance, and engage wider communities around local needs. Scale comes through the processes by which these partnerships are forged and lessons learned.

An inevitable challenge of the strategy to ‘go small to go big’ is pace. Go too slow, and the potential impact of pilots can be lost. Go too fast, and the parties involved may lose the fundamentals of the process. Organized communities of the urban poor – the most integral factor in the process – are the most likely to get lost in such a situation.

When the South African government tried to take ‘formal’ housing delivery to scale, that is exactly what happened. Most of the building was farmed out to developers and other private contractors, leaving organized communities of the poor in the dust. The all-too-predictable shoddy work, corruption and profit-taking ensued. The government’s change of tack towards informal settlement upgrading is just the latest indication that this strategy did not work.

Donors are realizing that often the best way to get involved with these activities is to fund the social process behind them. ISN is showing on the ground how its capacities as a social movement are the most basic ingredient for success in reaching scale. The ability for communities to organize, meet and work together, and to engage governments and other partners, are all part of this social process. Funding city-wide profiles, settlement enumerations and exchanges builds that capacity and, ultimately, the capacity to develop on the ground.

Of course, funding a social movement is a leap for many donors. The activities that build capacity within the movement are often difficult to measure. It is through the interaction and development of local knowledge, local learning and local action that working at scale can begin to come into focus.

For donors like the Rockefeller Foundation, major funders of the South African SDI alliance, building local networks of the urban poor and their capacity to scale up is the most innovative and effective use of their money. Even if the networks flounder – a social movement was never built in a day – local learning can emerge. In building a network based on the accumulation of local knowledge and exchange of that knowledge, failure today can be a catalyst for wider success tomorrow.

Learning from each other

The ISN members are learning from each other to show just that. In 2010, a series of exchanges among informal settlement dwellers in the municipalities has been ongoing. Dwellers from Ekurhuleni and Johannesburg are learning from the Joe Slovo experience by seeing it for themselves. There, water and sanitation projects are under way, and there are even some incremental multi-storey housing developments in the works. Members of the ISN in Ekurhuleni and Johannesburg are now meeting to identify their own upgrading priorities and deciding among themselves which informal settlements have the greatest need, and where the greatest chances for impact learning can be in order to move to scale.

Such exchanges are also taking place internationally through the SDI alliance. In February, Joe Slovo community members visited a community in Mbare, Harare, where the Zimbabwe Homeless People’s Federation built and maintains a communal sanitation block.

Elsewhere, informal settlements in Cape Town, such as Barcelona and Sheffield Road, are counting themselves, identifying priorities, engaging with local governments, and securing resources to address their needs. Exchanges allow members of these communities and others to join hands and learn from each other about the challenges and successes of these projects. Hands-on engagement with government means that this ‘learning by doing’ approach has practical policy implications on resource flows.