If you thought HIV/AIDS was under control, think again. Annie Lennox did, in 2003, during a visit to South Africa. Hearing Nelson Mandela talk about HIV/AIDS and how it was affecting women and children, she was ‘outraged, angry, ashamed’. That visit set her on the path of activism, advocacy and philanthropy. 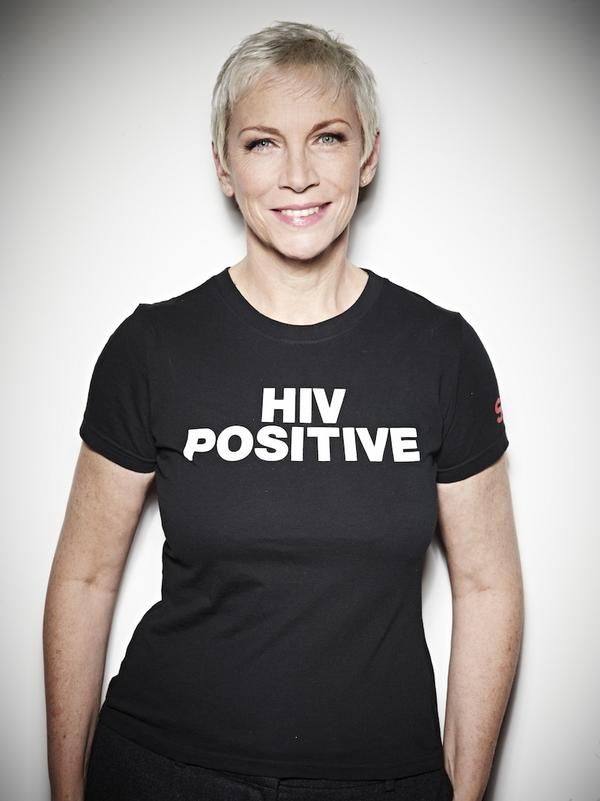 What led you to philanthropy in the first place?
Annie Lennox Well, philanthropy is the last part of it. The first thing that drew me to the things I do was witnessing injustice towards women and children in circumstances that were so extreme and yet so ignored, both globally and in the countries that these things were happening in. I’m talking about the HIV/AIDS pandemic in southern Africa.

I was one of the artists invited to go to South Africa by 46664, which is Nelson Mandela’s HIV/AIDS foundation, to perform at their launch concert in Cape Town in 2003.

The day after the event, Mandela invited us all to join him in the exercise yard of his former prison on Robben Island, where he was to address a gathering of international press to talk about HIV/AIDS and how it was affecting the people of South Africa, mainly women and children. Mandela described the pandemic as genocide, and that is not a word that you can use lightly.

Listening to him, I started to understand things differently. I had thought, like many people in the West, that HIV/AIDS was a problem under control; there were treatments available.  However, in South Africa, and in other countries in Sub-Saharan Africa, people weren’t receiving these treatments.

The virus was wiping people out in numbers you cannot even begin to imagine. Once I started to realize how this was affecting women and children, it went very deep with me, as a woman and a mother myself. I was outraged, angry, ashamed that I didn’t know more about it and that the international community wasn’t doing more to raise the profile of this issue.

At that time, Thabo Mbeki was President of South Africa and taking something called the ‘denialist stance’, claiming that HIV/AIDS doesn’t actually transmit itself into full-blown AIDS – which made it very difficult for people to get access to treatment.

I realized that women had a very small voice in all of this, although they were the ones who were most affected. I decided that this was an issue I wanted to get involved with. I wanted to contribute my own voice to creating a bigger platform, in any way that I could. So every time I was invited to perform for Nelson Mandela’s 46664 Foundation, I accepted eagerly. I gave talks and I learned about HIV/AIDS – I really was on a learning curve for several years.

But during that time I began to get quite frustrated; I wanted to be more hands-on. So in 2007 I created my own campaign, called the SING campaign. I’m wearing a T-shirt that says ‘HIV Positive’ because I’m part of that campaigning process. The issue of HIV/AIDS is very much affected by stigma, silence, shame and fear, and this stigma is one of the reasons we don’t read about it more often; it’s a hard issue for people to face. They’d rather put it on the shelf.

So, first of all, I began to speak about the issue. In the role of advocate, I’m a UN AIDS Goodwill Ambassador, I work with Oxfam in the same capacity, I’m a Scottish Envoy for the Scottish Parliament, and I’m an Envoy for London. All these things are under the umbrella of HIV/AIDS; that is what I’m really passionately engaged in. I also began to raise money by giving concerts, and I put it into a foundation, called the Annie Lennox Foundation, in order to formalize how that money was spent.

Do you receive any help or advice with the foundation?
AL  I work with Comic Relief in the UK; we have regular meetings to consider where the money should best go. I see them more as partners than advisers. Sometimes I’ve come across organizations that I was impressed with, and they have subsequently come on board through me. And they do the due diligence.

How does this bear on your work with mothers2mothers? 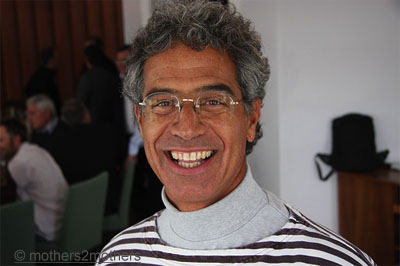 Mitch Besser Annie and I met when she came to visit mothers2mothers years ago and she became one of our supporters. As an organization, we benefit from the advocacy she does for the global cause, making people realize that we need to continue to focus on the epidemic, and we are not at a place where we can say we’ve done that already.

What she’s been able to do is to continue to bring people’s attention back to the epidemic as something that’s solvable. As an implementing organization, we rely on the campaigners who continue to make sure that people don’t lose interest, and we also rely on the philanthropy. The implementers, the advocates and the philanthropists all have a role to play.

AL What was really impressive about mothers2mothers was that they were specifically doing the work I felt needed to be done. HIV/AIDS is a very complex issue. There are many strands to it, and they’re difficult to disentangle. Maybe there is not one solution; maybe there have to be several kinds of solutions. But if a pregnant mother passes on the virus to her newborn child, that’s simple, and mothers2mothers showed that working to stop that was possible – it was a success story. That’s why I was very inspired by the work that Mitch has been doing with mothers2mothers for the last decade.

And it has been rolled out as an excellent blueprint which might apply to things other than just HIV/AIDS. When you have broken-down healthcare systems that really don’t serve people well, you have a drain on human resources – of trained doctors and nurses going elsewhere – so you have to look at alternative ways of helping the people of those countries get access to healthcare and treatment.

Can you say a bit more about how you decide what projects to support? Do you stay involved with the organizations afterwards?
AL  Most of the organizations we support have some kind of connection to each other, some kind of continuity or thread. I like to know that they’re going to be an investment, not just a bottomless pit. Ideally, I like to see them for myself. I would encourage any philanthropist to actually see the projects themselves and meet the people that are running them and have a sense of where they’re going – and keep a relationship going.

I think that’s important. What’s more valuable to an organization? You can give them a donation for six months or a year, but if you can give them something that will last for maybe three, you’ve got a seed that will grow and maybe will take them on to the next stage.

You have to find the ways of spending the money that are the most effective. That depends on each project – each one is unique – and each person that is giving has got a different view on things. But I look for something sustainable, with a view to what can be achieved, and then I can go back and see what has been done and whether I need to continue support. So I would say, it’s important to stay involved with what you’re doing.

Can you tell me about the Circle?
AL  About four years ago, when I was working with Oxfam, I had an idea for something called the Circle. I’ve been in countries where women have absolutely nothing, and I come back to my own country and see how well off I am, and most of us are: we have access to clean water, sanitation, healthcare and education.

We have a democratic system and can vote. We’ve inherited many things from our grandmothers who fought in the Suffragette movement for the privileges that we take for granted. So I thought if I could bring women together to discuss issues that are pertinent to women in the developing world, perhaps we could make connections and partnerships between us all.

What does the Circle do?
AL  It started with a small dinner to say: ‘this is how I feel about things and I’d like to get together with like-minded women that feel they want to get engaged.’ It’s an inspirational tool, it’s a connective tool. I don’t like the word ‘network’, but following that evening people sometimes meet each other who ordinarily might not and great things can arise from that.

We form little circles, maybe through a project. For example, two of the women there were very high-powered lawyers, and they didn’t know each other.

From that link, they formed the Lawyer’s Circle. They encouraged women lawyers to get together and figure out what their contribution could be, through an Oxfam project. They have gone on various trips to talk with female lawyers in Africa and discuss what is happening in terms of women’s rights. That way they can create a dialogue and hopefully facilitate change.

What ideas and insights did you take from the UBS Forum?
MB  I think the notion of how important it is to see ourselves as part of a collective. While we lead individual lives, we need to take care of the world we live in and see ourselves as responsible for it. The talk [by moral philosopher Clemens Sedmak] on how important it is that we find ways to coexist effectively was inspiring and illuminating.

What’s frightening is how few environmental resources we have. We have to address that immediately; it’s not something we can leave to the next generation. It would be nice to see how we can translate big ideas into effective action. So often we talk about big ideas and we don’t make the next step to how we make them actionable; or we talk about little actions and don’t understand how they fit into the bigger picture.

AL  I was thinking about all the things the former president of Norway [Gro Harlem Brundtland] was saying, about climate change and women’s rights and so on. The big challenge is that all the systems exist together and we can’t make the necessary changes slowly when we don’t really have much time. The topics she explored were just the surface layer. There are much deeper levels under that. But I think these get-togethers are an opportunity for dialogue, for ‘a-ha’ moments in individuals’ lives.

Is there anything you’re likely to change in your own work when you go back?
AL  I pretty much follow the path I’ve been taking for the last decade. I try to follow one guideline, which is ‘stay with the issue’, because it gets confusing for people if one moment I’m talking about cancer and then I’m talking about something else.

To be frank with you, I’m very passionate about living life and the challenges we all face as human beings, whether in developing or developed countries. I think it’s all fascinating and I love to participate as one of the agents of change in some way. But I’m going to focus mainly on HIV/AIDS and women’s issues because at the root of the whole thing is misogyny.

If you look at HIV/AIDS and how it affects women and children, you can take it down to human rights and women’s rights: the gender bias, violence against women, the lack of power that women have in societies where they can’t choose who they’re going to marry. They have a male will imposed on them; they don’t have the protection in the law that they really ought to have. You cannot look at HIV/AIDS and women and children without connecting them down to that root.