Effective philanthropy: why you cannot go it alone!

Swiss foundations operate in a permissive legal environment. But although they don’t have to disclose publicly what they do or how they do it, Beate Eckhardt, chief executive of their umbrella body, SwissFoundations, argues that there are good reasons why they should at least think about it. She tells Charles Keidan how she believes peer learning and a voluntary foundation code are helping to develop a sense of purpose and maintain public confidence. 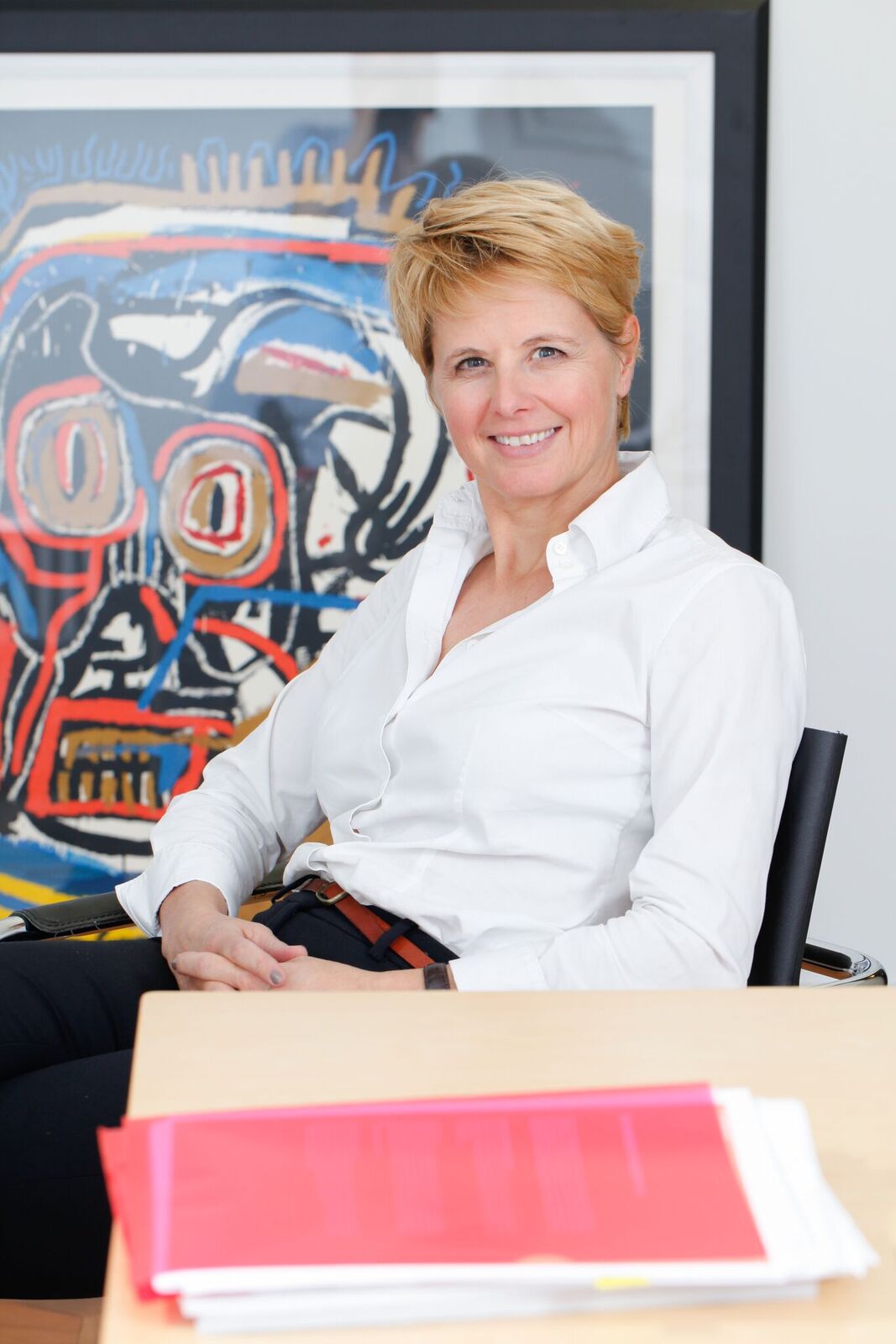 Would you say there’s a specifically Swiss tradition of philanthropy?
I believe so. The Swiss political system provides the opportunity for its people to take responsibility for, and become involved in, their society, not only by their vote but also by their actions. Apart from being very generous in their giving habits, Swiss people do six million hours of voluntary work a year to help others. Another very important pillar in our civil society is Swiss charitable foundations. The trust in this system is very high in the country and we hope to keep it that way by further raising awareness of the possibilities and influence of the sector.

How big is the Swiss foundation sector?
We know of 13,000 public benefit foundations in Switzerland and that number is growing, effectively at the rate of one new foundation a day. With a foundation for every 625 inhabitants, Switzerland is the country with the highest density of charitable foundations in Europe. However, many of them are small – 85 per cent have on average less than three million Swiss Francs in endowment (€2.7 million). About eight or nine thousand of them are grantmakers. The French-speaking part of Switzerland especially, with its international hub of UN organizations and related charitable foundations in Geneva, is very dynamic and has grown above the national average in the last few years.

I understand there is very little Swiss law relating to foundations. What does that mean in practice?
In Switzerland, it’s very easy to establish a foundation. For example, we don’t have a list of purposes that have to be fulfilled in order to qualify as beneficial to the public. There are eight articles in the civic code relating to foundations, but they are very general. So what we’ve focused on here at SwissFoundations so far are self-regulation codes – the way the sector sets voluntary standards of practice for itself.

Grantmakers often work in a silo. They have money and they have a purpose, but who helps the foundation adjust that purpose in the long run, or build a strategy, or manage its assets accordingly? 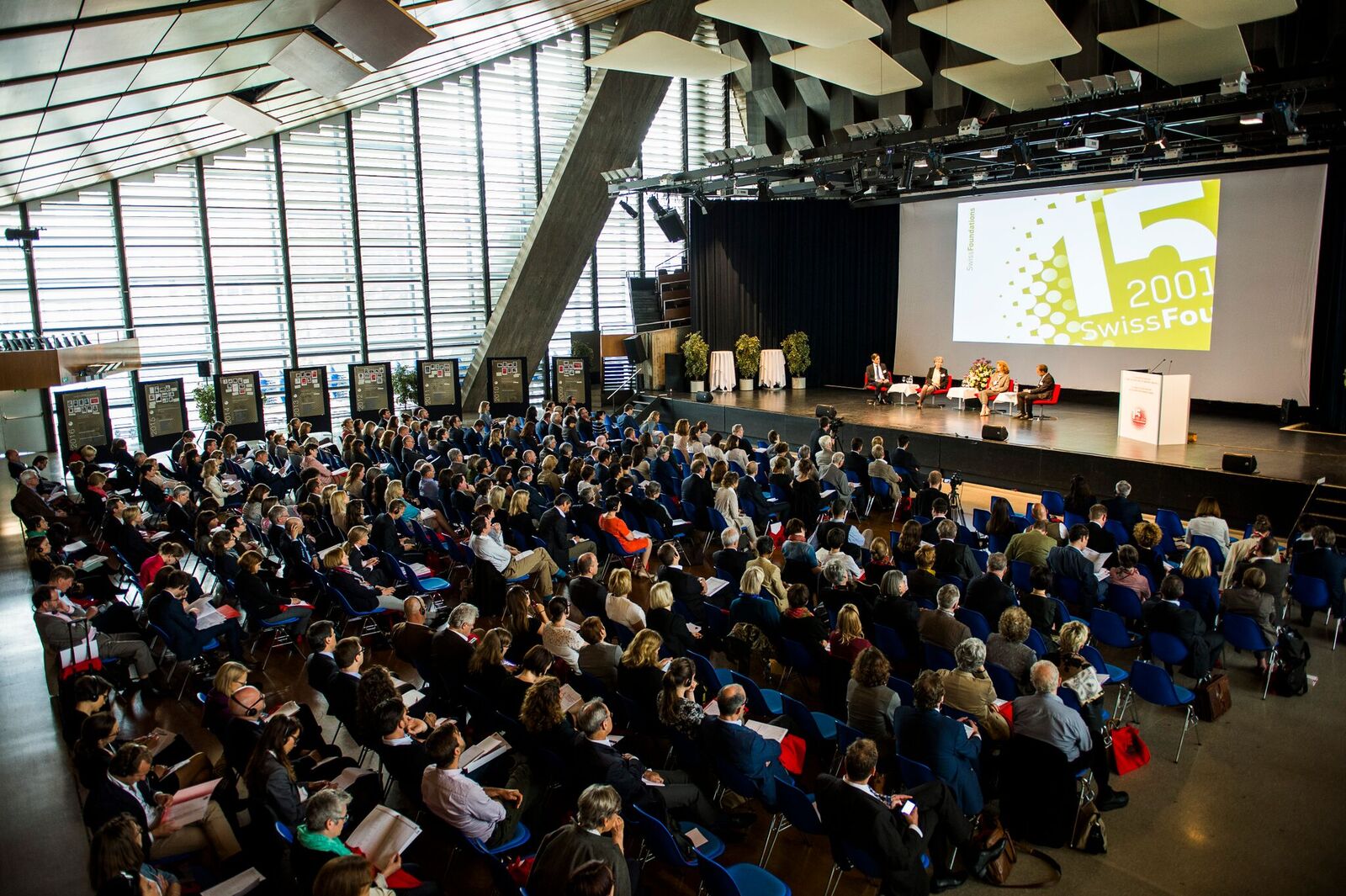 Symposium of Swiss foundations, May 2016, at Palais des Congrès in Biel/Bienne.

What was the impetus for Swiss foundations to organize themselves?
Grantmakers often work in a silo. They have money and they have a purpose, but who helps the foundation adjust that purpose in the long run, or build a strategy, or manage its assets accordingly? When it comes to asset management, you can go to the banks, the wealth managers or other trustees, but are they really neutral? Are they really objective? And the same questions pop up when it comes to strategy or building a board. What are the personalities and profiles foundations should look for? How should they deal with conflicts of interest? There are a huge number of open questions, so 11 of the larger foundations started an informal roundtable three or four times a year to discuss these issues. 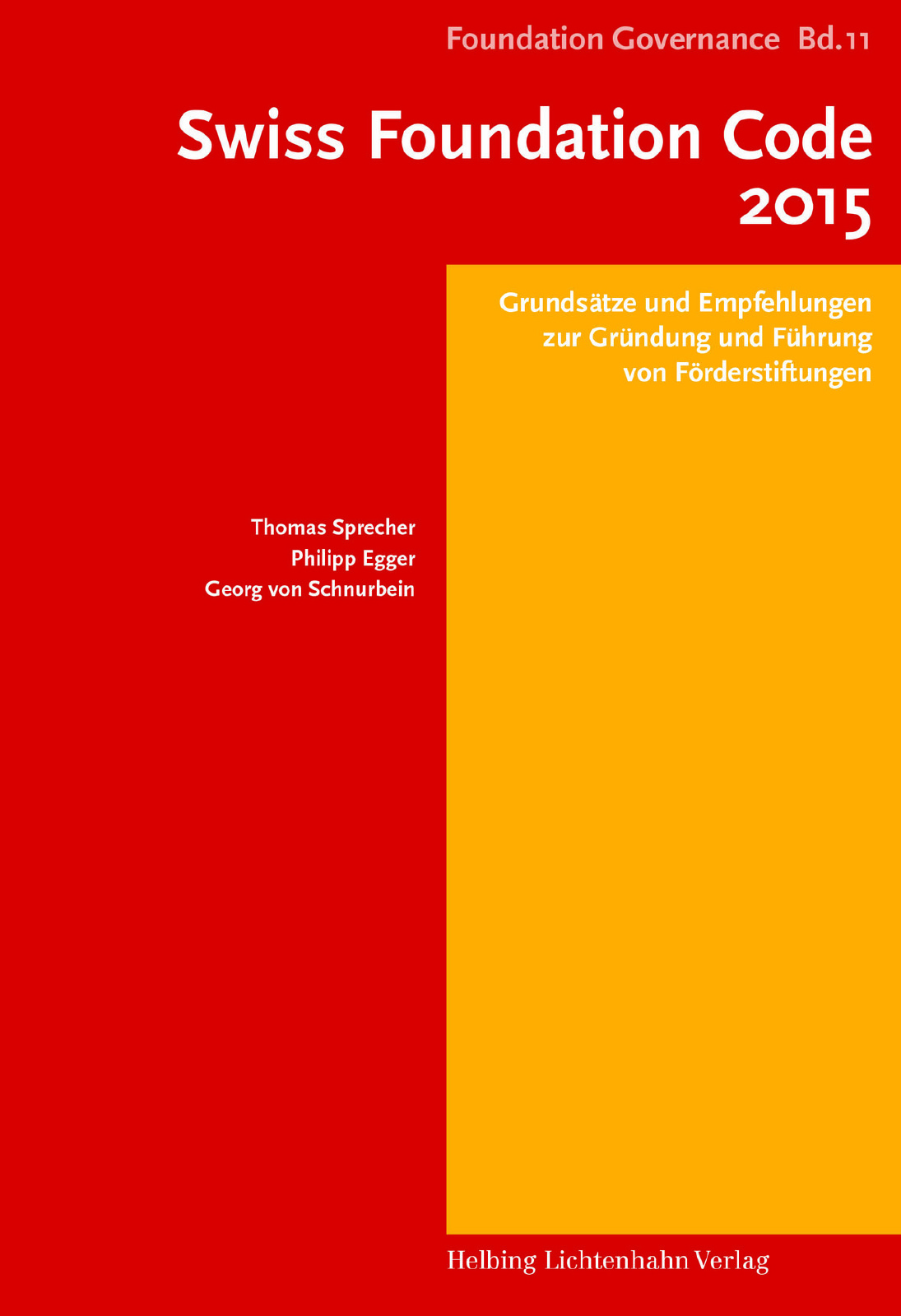 It was not long after that you developed the Swiss Foundation Code. How did that come about?
It was the ambition of SwissFoundations to offer foundations’ representatives a guide to how best practice in their activities might look. Right from the beginning in 2005, the Swiss Foundation Code was designed as a set of recommendations, not an obligation. We wanted to take as many foundations as possible with us on that journey. If you offer recommendations instead of obligations, people start to think about and reflect on them. It’s a source of inspiration. A further advantage of the code is that it was designed from a very practice-oriented point of view. We intended, and still intend, to tackle the current challenges foundations are facing and to offer inspirational solutions. In the meantime, the third revised edition of the Swiss Foundation Code was published in three languages, including English, at the end of 2015.

How has the code changed in those three editions?
I think it’s interesting to see that the number of recommendations has increased, especially when it comes to the management of assets. We’ve noticed that board members have become more aware of the importance of an asset management policy aligned with the purpose of the foundation. At first, the code provided just pure recommendations and some bullet points, but by the second edition, we had started to provide a commentary, and that has been very useful because it’s the flesh on the bone. This way, the reader is able to see the bigger picture and define what good practice is. So each of the 29 recommendations in the Swiss Foundation Code 2015 has one to two sides of commentary, which gives you a full picture. It’s what we recommend to Swiss charitable foundations, but might be of interest to European foundations as well.

One of the more unusual recommendations is about paying board members. What’s behind that?
I think it’s important to mention that the code states clearly that pro bono work is very welcome. Indeed, the best option would be to find people who will perform board responsibilities pro bono. But being a board member involves strong commitments which are increasing – and more and more professionalism. It’s challenging to run a foundation in the best possible way. Therefore the remuneration of board members should be considered on a case-by-case basis.

Right from the beginning in 2005, the Swiss Foundation Code was designed as a set of recommendations, not an obligation. We wanted to take as many foundations as possible with us on that journey.

How many are paid in Swiss foundations?
I would say the small ones are not paid, but if you have significant annual spending, you need to be sure that you have the right expertise on the board, and normally such expertise and professionalism is rewarded. This can be done in different ways. Sometimes, the board members receive a flat fee or are paid for their specific contributions. We were very lucky that the federal council in Switzerland, our highest political level, supported our approach. 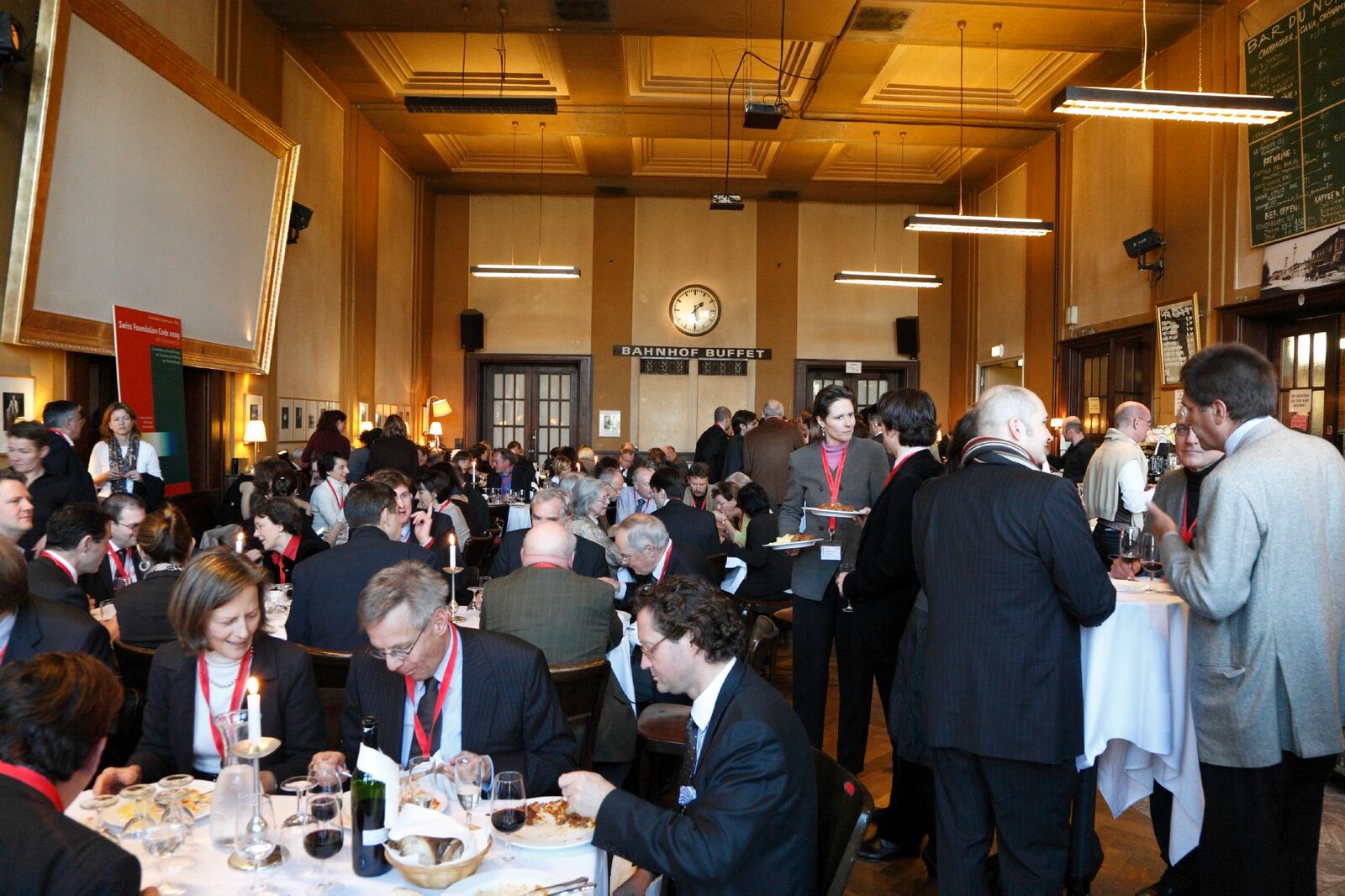 SwissFoundations organizes roundtables on relevant issues where members can network and learn from each other.

So the idea is that this will lead to an improvement in performance. How do Swiss foundations measure performance?
There are a lot of discussions going on about performance measurement in Switzerland at the moment. It’s something many foundations are struggling with. If you have a huge foundation, you can afford to hire an academic institution to help you assess your impact, but if you’re a small foundation with an annual income of half a million Swiss francs, it’s much more difficult.

As a result of your code, do you see foundations moving towards more disclosure of the sources of funding or of the destination of funds?
In Switzerland, foundations have to disclose their accounts to both the supervisory and tax authorities, but they do not have to disclose publicly. We feel that each foundation has to find its own position on its level of transparency. There are good reasons not to disclose all information to the public. However, public demands to know more about funding and about spending will increase.

The other element of performance and impact is learning from one’s peers. I understand SwissFoundations has set up seven working groups. Can you tell me something about those?
We offer working groups on finance, culture, social issues, the environment, research and education, international development aid, and one specifically for corporate foundations. Beside these, we have started roundtables on relevant issues. It’s crucial for us to offer our members platforms on issues like migration in Switzerland, or the integration of refugees into the labour market. They are a response to the needs raised by the foundations themselves. As we are all aware, these challenges are tremendous. Working together and exchanging ideas and experience on these issues has helped to build trust and a common understanding. We see real cooperation happening between our members, financially, intellectually and strategically.

Swiss foundations at a glance

I remember you mentioning that corporate foundations had found a common identity through participation in the working group.
Corporate foundations are bound together because they have specific challenges when it comes to their governance. Being established and endowed by, and in many cases still embedded in, corporations can be an advantage and a disadvantage at the same time. You may face real conflicts of interest but, on the other hand, a close relationship may allow you to use additional resources such as the business’s expertise, manpower and networks. SwissFoundations has launched a working group together with three corporate foundations that allows our members to exchange with peers and to reflect on best practice. We started the group at the beginning of 2015. In the meantime, we’ve organized three one-day meetings – on effective governance models, impact measurement and employee engagement.

European corporate foundations are meeting in Paris in December. Will there be a number of Swiss foundations participating in that?
Actually, yes. Of the 80 foundations who are expected in Paris, I believe that there are between 10 and 15 who are members of SwissFoundations. James Magowan, the coordinating director of Donors and Foundations Networks in Europe (DAFNE) came to Switzerland to attend one of our workshops on corporate foundations. So far, there are not many countries where corporate foundations have been brought together on a national level to foster a dialogue between them. We are very excited to be part of the programme committee for the workshop in Paris and are looking forward to this first European knowledge exchange.