Danny Sriskandarajah, Secretary General of CIVICUS since January, talked to Caroline Hartnell about the first nine months in the job. His overarching philosophy is to ‘consolidate and experiment’: to consolidate what CIVICUS does well but then to experiment and come up with new ideas that will themselves build momentum and garner support.
He would like to see the organization engage better with new social movements and citizen movements around the world – while cautioning against the view that Facebook and a Twitter campaign will bring about social justice and lasting change.
You’ve been at CIVICUS now for nine months so it seems like a good moment to take stock. First, what do you think is most important about CIVICUS?
Solidarity comes to mind. I like that word because I think it’s a value that’s often neglected in today’s world. CIVICUS provides solidarity across civil society around the world. We’re there to share best practice, invest in progressive causes, strengthen civil society – to be there for each other across the world.
According to your website, CIVICUS is ‘an international alliance dedicated to strengthening citizen action in civil society throughout the world’. How does that relate to solidarity?
We’re a tiny organization by world NGO standards, and we’re not specialist enough to deliver programmes on a particular issue or in a particular country. So I think our role is to say, how do we connect civil society activists across the world so that they can support each other? How can we take the concerns of civil society and feed them into relevant processes and institutions? Strengthening and solidarity work are both about connecting and enabling civil society in different parts of the world, then building on this to influence agendas in our collective interest.
Whereas it’s usually easy to see what national organizations do, global organizations often have an identity problem. Do you think that’s true of CIVICUS?
I think the nature of civil society, and its wonderful diversity, provides a huge challenge for us. We believe we’re there to fight for civic space everywhere in the world and we hope that our activities will benefit civil society actors everywhere. But few of them would have any idea of what CIVICUS is.
Given the changes around new social movements and new or recent popular uprisings, we have a second challenge: that organized civil society itself is being seen as less relevant these days. When I started, I asked colleagues who in Tahrir Square in 2011 would have thought of CIVICUS while they were mobilizing for an unprecedented civil uprising. The ways in which citizens are organizing and mobilizing these days are changing, and that’s a challenge for us.
Are there ways that CIVICUS can take advantage of social media and be stronger?
Yes. Our core constituency is and will remain organized civil society and in particular the national associations and umbrella bodies; they’re the infrastructure that supports civil society. But I think there is real potential for organizations like ours to strengthen and support spontaneous citizen action where and when it happens. There’s a temptation to believe that, with the technological fetishism around online ‘clicktivism’, somehow a Twitter campaign and a protest in a public square will result in lasting change. As we’re seeing in North Africa, that hasn’t happened without institutional follow-up, without organizations that can hold governments to account. I see us having to straddle new and old forms of citizen organization, and I think it’s important for us to deal with both and not get carried away with the idea that Facebook is going to bring about social justice.
You say that you see CIVICUS as especially relevant for national associations. Do they have a special category of membership?
I’m particularly interested in AGNA, the Affinity Group of National Associations, which CIVICUS has incubated and supported since it was founded. It has about 60 members at the moment, and they are themselves multi-sectoral national platforms for civil society. We recognize the importance of having good infrastructure for civil society and of national or regional bodies that can share best practice and lobby for the interests of civil society. CIVICUS can’t replicate those organizations or roles at the national or regional level but we can supplement them at the global level. So we’re trying to scale up the activities of AGNA because we think there is a need to link these national and regional umbrella bodies and support them.
At the global level, what can you learn from the business sector, which does all this a lot better? 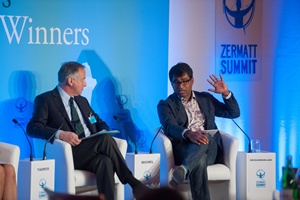