The Gates Foundation makes some very large investments. How will these lead to equally large-scale changes?

If you think, for example, of global health spending, the world is already showing a significant impact. In recent years, more than 100 million children have been vaccinated, saving a few million lives, and there’s a projection of saving 8 million in the years to come by scaling immunization and introducing new vaccines.

We take on these types of investments in conjunction with a wide number of partners. While we are a large foundation, in the type of work that we’re doing we represent a small percentage of the overall funding. GAVI [Global Alliance for Vaccine Initiatives] has reached more than 250 million children with vaccines, and that requires the commitment not just of the Gates Foundation but also of a large number of donor countries and other partners. In terms of scale, we always think how we can effectively use our resources in conjunction with others in order to achieve those big aspirations.

What’s the specific role the Gates Foundation plays in these partnerships?

I think the most effective philanthropy comes from identifying those areas where we can be a catalyst for an innovation or new intervention that can drive sustainable change. Now, the private sector often does that, but generally only when it sees a profit. The public sector will invest in things that raise the quality of life for society, but it won’t take risks. So we can fund innovation where government and private sector can’t or won’t. A great example is the work we have done on the malaria vaccine in conjunction with GSK. They had done some innovative research, but they didn’t see a market opportunity, so we partnered with them to move that work forward. Of course ultimately, if it’s successful, I expect governments will be involved in delivery of the vaccine.

Your new $10 billion commitment to delivering and developing vaccines is your biggest ever investment. What is the biggest barrier to achieving the sort of change that you’re looking for?

We have to make sure that both the public and government leaders involved in funding vaccine delivery understand the successes that we’ve seen. In 2008, fewer than 9 million children under five died, compared to 20 million in 1960. A big percentage of that drop has been because of the effective use of vaccines – and this is because of investments in delivery and health systems as well as in science and technology. If I could wave a magic wand, I’d use it to make the various entities see this tremendous opportunity to have a positive impact on the health of millions of children around the world.

It’s very important that we tell the success stories. Melinda and Bill [Gates] went to Washington DC for an event in October entitled ‘Living Proof: Why We Are Impatient Optimists’ and that was very much to do with making policymakers and people in general aware of the successes that have occurred in global health.

Often the problems with healthcare delivery occur at the community end – the logistics of how people get to clinics, finding the transport and the time to get there and so on. How do you see these sorts of issues being addressed?

I think it’s very important to recognize the breadth of the solution that’s required. So, for example, it’s important to encourage governments to invest in their health systems to improve their capacity to deliver not only vaccines but other health interventions too.

Right now, we are supporting some focused work in three countries to adapt, develop and evaluate optimal service packages for pregnant mothers and their young children. Of the nearly 9 million or so children who die under the age of five, about 3.6 million die in the first 28 days, and that’s a growing percentage of the overall under-5 deaths. So we’re really trying to figure out how frontline health workers in communities and first-level clinics can help ensure the health of the mother and the young child, but it will be in partnership with the public health systems in those countries.

What about NGOs that might be able to reach the community level – do you ever support those as part of your overall strategy?

Absolutely. In our work with public frontline health workers, we are working with NGOs such as Save the Children, Mercy Corps and Partners in Health. We are a grantmaking organization and employ only about 800 people, so we’re really working on strategies and on developing partnerships with people who can deliver on those strategies, and often those are the kinds of NGOs that you’re describing.

Do you ever worry that large partnerships like GAVI could themselves become bureaucratic, recreating some of the big international bureaucracies that you might be wanting to work differently from?

I think it’s very important that we are active partners. All of us who are involved in the governance of entities like this have to be vigilant to make sure we are getting the best out of the intermediary. But GAVI, for example, has reached more than 250 million children with vaccines and probably prevented about 5 million deaths.

Since you joined the Gates Foundation, or indeed at any other point in your career, has your thinking about how to create large-scale impact changed? If so, what triggered that change?

One of the things I learned from my business career was the importance of partnership. A company like Microsoft has about 750,000 partners who make a business out of Microsoft’s business and create impact on a huge scale. I see partnership as being extremely important in the philanthropic sector, too; we can succeed only if we have picked the right partners.

So the basic proposition hasn’t changed, but it’s become clearer to me that different types of partnership will suit different challenges. For instance, I was recently in Mozambique, looking at projects run under the aegis of the Consultative Group on International Agricultural Research, which is essentially a multilateral network. One project was producing new strains of sweet potato that would grow larger in environments where water is scarce. The ramifications of this are potentially very important – 69 per cent of children in Mozambique are Vitamin A-deficient, which means there’s an increase in childhood mortality due to infections like pneumonia and diarrhoea. Increasing the proportion of sweet potatoes in the diet of lower-income families in Mozambique and other southern African countries can help to address that deficiency. This is a good example of how you can work across domains of expertise; it’s a great partnership.

Other than foundations and philanthropists, where do you see hopes of accelerating system change?

Certainly donor governments play a critical role, and I think companies are realizing they can make a difference as well. When I was in Mozambique I visited Banco Procredit. This is actually a bank, but their particular focus is on what they would call a double bottom line. They want to be profitable and they want to reach the parts of society that don’t get banking services. There’s an example of a company that is really making a difference in many countries.

Multilateral entities play an important role too: we’re working with the World Food Programme on an initiative called Purchase for Progress, which is a way for the World Food Programme to deliver their mission of providing food security, but also a way for them to reach smallholder farmers as the source of food. We believe that a great long-term, sustainable way to increase food security is by developing the agricultural sector in the developing world, so the developing world can more effectively feed itself. 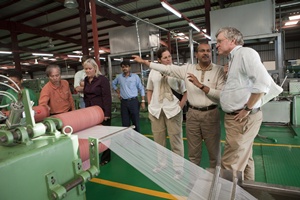 Finally, what do you find most challenging personally about achieving the mission of the Gates Foundation?

There’s just so much to learn. One day I’m learning about malaria, another day about agricultural development in the developing world, and another about US education. It’s also very important that we learn what is working and what is not. I would say the key challenge is to make sure that we’re always learning. I think that’s critical to success in life and in effective philanthropy.

Photo caption: Jeff Raikes on a tour of A to Z Textile Mill, a manufacturer of durable mosquito nets outside Arusha, Tanzania