The Bill and Melinda Gates Foundation has recently opened an office in London. As Joe Cerrell, who heads up the new office, told Caroline Hartnell, it’s not so much so that Gates can increase its already considerable European grantmaking, but so that it can work more closely with European organizations across all sectors.

Why has the Gates Foundation decided to set up an office in Europe?

In a way, we’ve always been in Europe. We’ve made more than 500 grants to 210 organizations across Europe. This is an opportunity to be much closer to those we’re currently funding and to try to help them work more closely with one another. There are lots of organizations doing similar things but they don’t often work together. I think the foundation can convene not just grantees but also other organizations, and try to look at ways to bring much more alignment.

Also, Europe has a longer tradition than the US of advocacy and campaigning for development. We’ve often depended on European champions such as Gordon Brown and Tony Blair, and hopefully the new UK government leadership will really move the development agenda on. We hope that by setting up shop here we can work more closely with governments that are funding development and looking at global health and areas like agriculture in the developing world – through joint investments or joint funding opportunities.

Would you carry out advocacy with those governments or would that be done through your grantees over here?

Ideally, a combination of both. The foundation does carry some weight but I also think that working with advocacy organizations across Europe – either on an issue-by-issue basis or looking more generally at maintaining the momentum on development – is another way to support our overall advocacy aims, which are more money, better money, and better policies towards the issues that we work in.

What sorts of areas might you want to collaborate on with governments or the EU and what sort of role would the Gates Foundation play?

We think of the role of philanthropy in general, and certainly of our foundation, as being able to take big risks where governments might not be able to. Where we have some potential breakthrough solutions, whether it’s new vaccines or new ways to increase agriculture productivity, we can take them to governments and tell them that we have found what we think will be effective solutions to addressing issues of global poverty and we want to work with them to scale up some of them to reach the greatest number possible.

One example of the way we’ve collaborated with governments in the past is the affordable medicines facility for malaria, where six governments and the Gates Foundation came up with $1.5 billion to try to guarantee the market for a vaccine that wasn’t yet developed, the pneumococcal vaccine, so that it was widely available to people in the developing world.

So in cases like that, you’d take the leading role?

Absolutely, but it will be a two-way partnership, where we expect development agencies or science ministries to be engaged in an ongoing dialogue so we can consider funding some of the more promising things they’re investing in.

I think the hallmark of the partnerships we form is that all sides bring something to the table – whether that is scale or risk tolerance or the talent that our technical teams have to offer.

What about other sectors?

We’ve already got pretty good partnerships with the private sector, and pharmaceutical companies in particular. With some of the leading developers of new vaccines, new drugs and new diagnostics, we want to try to understand what it’s going to take to get those companies to invest more in global health research. Recently, we supported the development of the Access to Medicines Index, which is a ranking of companies and their commitment to global health. GSK, a UK-based company that’s doing extraordinary work in diseases in the poor, topped the list. Obviously we hope to go beyond that, certainly with food companies and agriculture producers.

The European philanthropic sector is relatively new to us. We have good partnerships in the US with bigger foundations and we hope to establish similar partnerships in Europe. I’ve been spending time with the Children’s Investment Fund Foundation (CIFF) and Absolute Return for Kids (ARK), trying to understand what their strategies and objectives are. In some ways, there’s a much longer tradition of philanthropic giving in Europe. I think there are also opportunities, certainly with our great giving initiative that was just announced by Bill and Melinda and Warren Buffett [the Giving Pledge], to find ways for more high-net-worth individuals to get engaged.

Will you be aiming to form the sorts of partnerships that you’ve had in the US with the likes of the Rockefeller Foundation and the Ford Foundation?

Yes, certainly. We’re already funding some similar programmes in nutrition with CIFF and we’d love to establish that kind of partnership with other organizations. In other cases, I think it’s about looking for complementary areas with like-minded organizations. So if we’re on, say, the research and development side, but they are doing more of the downstream delivery side, we can work with each other and try to encourage them to help scale the results of research and development.

How does the CIFF partnership work?

We’re co-funding GAIN, the Global Alliance for Improved Nutrition – an effort to try to improve micro-nutrition, especially among kids. We’d like to try to expand some of the success of its early work, and to encourage them and support their efforts to work in other countries.

We also work with Wellcome Trust. We’re both contributors to the Grand Challenges Explorations initiative (GCE) in global health and we work with them closely on the work they do on malaria. But they also work on nutrition and there may be possibilities for collaboration on agriculture.

Will any grantmaking happen from here or will that come from the US?

Most of the funding will still probably come from the US. We’ve done a couple of small grants here and we may do more in the future. These would be for work that is purely European, or carried out by European organizations where we may have an advantage in terms of overseeing or staying in close touch with the grantee.

We’d like to help give a push to efforts to try to get European countries to maintain their commitments made at the Gleneagles G8 summit in 2005. This is not necessarily health or part of our global development remit, but it spans both. That may be the kind of area where we give small grants.

Why did you choose the UK?

Early on we established a pretty close connection with the UK, at both the science research level and on the development side with DFID [Department for International Development]. In fact some of the ways in which we’re now working with DFID we’d like to emulate with other countries. The UK is one of the largest givers to global development and I think the range and sophistication of investments is quite high. We think alike in many respects.

There’s also the logistics factor, which is that London is a jumping-off point for virtually any location in the world. We’re just one flight away from Seattle, while our China offices can get here relatively quickly. This office has a small amount of workspace, but we’ve got quite generous conferencing facilities connected via the web and we have space that we hope grantees will utilize for meetings.

When you say the UK is among the largest givers, you’re talking about the government? 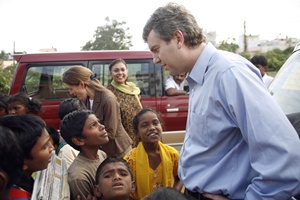 Principally, yes. But we follow the work of organizations like Comic Relief and Sport Relief, and even in tough economic years the sums they raise continue to rise. I think it is an indication both of their ability to convey why these issues are important and of a genuine commitment on the part of the British public.

Joe Cerrell is head of the Gates Foundation office in London. He has been with the Foundation for over nine years, most recently as director of the global health policy and advocacy team.

The photo above shows Joe Cerrell speaking with children during a 2005 visit to the Baiyappanahalli Slum Dream School, Bangalore, India.