Is holding competitions and giving awards an effective strategy for grantmakers? What happens to award winners further down the line? Caroline Hartnell spoke to Svati Bhogle, secretary of the non-profit TIDE India and founder and CEO of its profit-making sister company Sustaintech, about how the business has developed since winning the Ashden Award for Sustainable Energy in 2008 and how her own confidence has grown. She also spoke to Anne Wheldon, senior adviser to the Ashden Awards, about what they look for in applications, and what makes winners stand out from the rest.

TIDE India is a non-profit society that aims to encourage sustainable development through technological interventions. It has completed over 135 projects, working with grassroots entrepreneurs in a way that promotes local capacity building and environmental benefits. Its sister company Sustaintech is a social enterprise that promotes sustainable energy technology in rural and semi-urban areas and aims to ensure that clean development is accessible to the poor.

Can you tell me about TIDE India and what stage you were at when you won the Ashden Award in 2008?

We registered it as a non-profit society in 1993 but we didn’t get our first funds until about 1996. By the time we won the award, it was a stable non-profit. We were developing cookstoves and other products for small businesses and artisan industries such as post-harvest processing, herbal medicine processing, textiles, silk – a whole lot of activities. The funding was not difficult because we had established a reputation.

The grassroots enterprises we supported and helped to grow were all profit-making enterprises but we remained non-profit. That was our model. We were granting around 10 million rupees a year. We were making this technology available to social entrepreneurs, and all the knowledge is in the public domain. We were grant-funded by the government, so it wouldn’t have been fair to hold on to it for ourselves.

So what was the basis of your award application and what did you want from it?

We got £40,000 from it. We saw it as an opportunity for us to look at our weaknesses and strengths in relation to the scaleability of our work.

When we won the award, there was a lot of media coverage, and the questions the media asked us were the same questions that we were asking ourselves: if we were relevant to thousands, as we had proved to be, what was preventing us from reaching out to millions? It pushed us to think.

And what did you decide were the barriers to scaling?

One was our whole enterprise model, which involved us pushing grassroots entrepreneurs. Their aspiration levels were different to ours, and we decided that we could not trust that our dreams and aspirations would be delivered by somebody else. We wanted to add focus while continuing to support the entrepreneurs. Our scaled-up project would be more centralized. Although it would still involve our grassroots entrepreneurs, it would be led by us and we would be the driver. We realized that our non-profit model was simply not scaleable.

TIDE’s mission is to catalyse change in livelihoods and in the artisanal industries through technological intervention. We decided that we needed a new product that we could standardize and which was amenable to scale. That was why we went into the commercial cookstove market – we looked at several markets but that was the one that looked like taking off fastest. You see people cooking and eating in the streets everywhere now and that was where the abuse of fuel was the highest, so we decided to look at stoves for street food vendors. 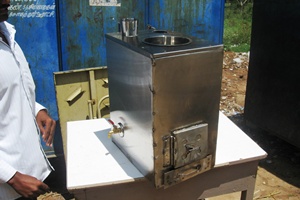 We’ve now got a range of cookstoves for different uses, all for cooking street food – one for pancakes, one for tea and coffee (pictured), and so on. They cost roughly 16,000 rupees, about the same as a refrigerator. These stoves reduce the cost of fuel by about 40 per cent, which means people can pay for it in about a year of operation, and after that it yields consistently profits for the lifetime of the stove. Another benefit is the smokeless environment, and it is cooler because the stoves are insulated and don’t radiate heat. This healthier, cleaner, safer atmosphere means they are able to attract more customers.

At the moment these people don’t have enough money to buy the stoves – they don’t even have bank accounts – so we need to introduce them to the bank to get loan funding. We’re developing credit systems with the mainstream public banks to help with the cost –it’s happening rather slowly but we’ve got the agreement in place. The banks have been good, though, and the management has clearly directed its employees to give the loans that are needed. We’re working with the lead bank in our region – and if we have one bank on board, why not ten banks? I think we can prove that it works.

You also went to the Clinton Global Initiative and the INSEAD programme in Singapore as a result of winning the award. Did anything come out of those?

The CGI gave me a vision of scale. There were people speaking there who were the best in the world, so it really helped me to visualize scale. And it drove me to thinking ‘if they can do it, I can do it too’. It was an interesting learning experience but not necessarily translated into anything more measurable like funds or contact.

INSEAD was useful too, although I went into it not knowing what to expect. I knew that I was basically a researcher and I needed to become a leader, and I needed to understand the transition process: how do I become a manager, a leader? Where are my competency gaps and how do I fill them? It brought into focus both my strengths and my weaknesses.

What did you decide were your weaknesses and strengths?

I learned I had to do a lot more talking with my team and I had to take them along with me, to help them to grow. In research you’re just telling people what to do, and my new style had to be more participatory. I needed finance and business skills, team management and HR skills. I hadn’t focused on those before. As an NGO we were a small, intimate group and we could talk to each other freely. The communication was always very good. But once you are in a more corporate environment you have to adapt to different structures. The programme was only a week long, but it opened up my eyes and gave me ideas about what I should be doing.

In terms of strengths, I understood the sector – I’d been in the cookstove business, off and on, for 20 years – and I knew what people wanted. I understood their willingness to pay, their aspirations, and I also understood the engineering of the stove. We just needed to work out how to commercialize this.

If you look back at the last few years, what was the biggest thing that the Ashden Awards brought to you?

It brought me exposure and gave me self-confidence. I knew that I was part of a select, elite group of people here and in the world, and I could look at my achievement. Before I thought that my achievements were trivial because the problem was so large.

With Ashden consultants we also looked at everything from design to manufacture, supply chain to marketing, with profit-making as the final objective. We needed profit because we wanted investors and they need their money back. We’ve got investors now from the ERM low-carbon enterprise fund and Rianta Capital, giving us a total of £200,000.

What stage is SustainTech at now?

We just secured investment last month and we have a team of about 13 people now, operating out of a head office and three sales offices. We’ve got a well-established supply chain and we’ve sold about 200 stoves in the last five or six months. So we’ve laid the groundwork, and we just need to replicate and intensify the activity. Our initial 5-year target is about 70,000 stoves. 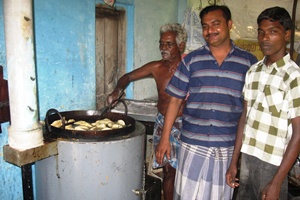 We want to do this by replicating a single centre, making each centre sustainable and profitable and contributing to head office costs, then opening up new centres. At every stage of development the challenge is different, but at the moment it’s about recruiting the right people for grassroots sales.

What do you look for in Ashden Award winners?

We want an organization that’s already up and running and in a stable state, and really delivering environmental or social benefits (such as reducing the time taken to do something, saving money, improving health). We also look for organizations that have the management and financial stability to enable them to go further. When you give an award to somebody, you’ve got a great example to inspire others: we want them to go further, but we also want others to do the same.

What was it about TIDE that made you choose them as your winners?

They had a very substantial track record as an NGO, and that’s what we’re looking for. We’re not looking for early-stage work because it’s not having the idea that is so difficult but making it work in practice – the publicity, getting people to buy the product, making sure your supply chain works, that sort of thing. TIDE had done that as an NGO, they had already helped a lot of small businesses get going.

How did this year’s entrants compare?

What’s really exciting this year is the range we’ve got among the international award winners. We’ve got people doing very different things: one supplying rural electricity services at very low cost, one providing cleaner cookstoves, one doing home insulation and improvement, one creating fuel from what was waste material. Four out of the five this year are businesses (the remaining one being the Aga Khan Building Support Programme, which creates a framework that lots of small businesses can work under), and I think that’s encouraging. Not that everything’s got to be done by businesses, but the fact that people will take the risk of creating a business opportunity to provide something for very poor people is exciting.

What’s really special about this year’s winner, Toyola Energy, is having a small business that hasn’t started with huge investment. He’s got education and training, and taken the risk personally to go for a product that right from the start has been pitched at a price that people can afford. It’s only because it’s affordable that the market has grown. He’s looked at ways of giving people the opportunity to pay, which is impressive, and you can only do that if you’ve got something working well on the ground. You have to understand the culture you’re working in and see if there’s a way to offer people a financial package.

For more information
http://www.ashdenawards.org
Click here to read an interview with Suraj Wahab, founder and CEO of Toyola Energy, the 2011 Ashden Awards winner