A disposition to give is not the same as a culture of philanthropy, argues Brazilian philanthropist Carol Civita. Brazil has always had the one but still lacks the other, she tells Caroline Hartnell. Part of the problem is that Brazilians see social problems as the government’s business, but in her view the country needs partnerships between the public sector and private philanthropy if social development is to catch up with economic development. But foundations are beginning to talk to each other, she says, a big step forward.

What role is philanthropy playing in Brazil at the moment?
Brazilians have always been noted for being charitable, but it was reflexive giving – giving to people in need without any deeper thought behind it. If you think of emergencies, if you think of natural disasters, Brazilians tend to be very charitable. But once this moment has passed, there is no sequel. What I see at this moment is that people are starting to realize that they want to focus, that they want their assets to go towards something that is organized and for the long term. So this is the basic change.

But it’s still very small and I do not consider Brazil as having a real philanthropic culture yet. I don’t like to call charity philanthropy – I think they are two very different things. Philanthropy is something that you have to be involved in; you have to understand the cause with which you are involved and you have to have a long-term plan. As for charity, it’s something very much of the moment, much more emotional than logical.

How in your view can the government encourage philanthropy to take on this role? Is it by giving better tax benefits?
I’m sceptical about the role of tax benefits. I do not believe that this should be the focus. In all my conversations I tend to put the question about tax benefits aside. What I believe in is results that can be shown. What is badly needed in Brazil is legislation to enable people to create endowments or funds – now very difficult to do and involving huge amounts of bureaucracy – without actually being penalized for doing so. I think this is more important than tax benefits.

But what we do have is something called Fumcad. It’s a government fund for elementary education for children. You can donate up to 6 per cent of your earnings and Fumcad will take care of distributing these resources to organizations that are in need and will give you a tax benefit on your donation. They don’t necessarily have to be government organizations; in fact most of them are NGOs. They are – how can I put it – official NGOs. There is a similar scheme called Rouanet dedicated towards some aspects of culture and sports.

Another example of where government and philanthropy need to work together is health. There are so many aspects of health: emergency health, chronic diseases, vaccines, preventives, research – and I don’t believe that the government alone can handle all this. Research, for example, is very important in Brazil but it’s not a government priority because that would mean neglecting some more urgent area. Research is an area where the government needs to partner with philanthropy, together with big universities with excellent research groups; it’s an area where philanthropy could have a big impact.

How can philanthropy encourage this sort of collaboration between the sectors?
When you have a case and you can prove something with that case, that’s the best way to go. And we do have some important cases in health research that could be used as an example to show the government where it could act together with philanthropy.

What does your family foundation do?
The Victor Civita Foundation was started 35 years ago by my husband’s grandfather, who set up an endowment in 1985, which was unknown in Brazil at that time. And he did something else that was very new at the time and is still rare today: he was very focused on his philanthropy. He concentrated not just on education, because that’s too broad, but on teachers in elementary schools. He started producing a magazine, with some logistical and financial support from the government, to help enhance their skills. 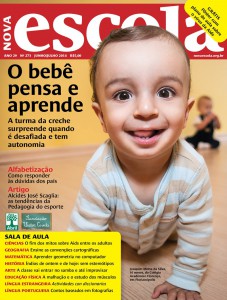 Thirty-five years later, the magazine is still being produced and goes out to 1 million teachers around Brazil, though we put the circulation at 3 million because each magazine is read by three people. These teachers will use the material in the magazine for their classroom work, which is important because some teachers are not very well prepared to teach in elementary schools in Brazil right now. They can also submit their projects to the foundation and some receive annual prizes, which they can use to enhance their skills further by going on courses in Brazil or abroad.

It is still a family foundation. The board is mostly family members with some partners from outside. This is new and important in Brazil: people are starting to understand that you do not necessarily have to set up your own operating foundation to support a cause. Most Brazilian foundations are operating foundations but, through GIFE, of which many of us are members, we are beginning to discuss the idea of more partnership, of pooling resources because setting up and operating your own foundation is costly and demanding and the reason you set up the foundation is sometimes forgotten on the way. So now, we have a couple of partners that are family foundations who are supporting our operation.

How many foundations in Brazil make grants as opposed to operating their own programmes?

Do you think it is important that there are foundations that are simply making grants to support a cause?
Yes, definitely. I see many foundations dying because the cost of operating them was so high and managing the operations was so complicated. You notice that when a foundation stops operating, most of the resources tended to go to the operation and not to the cause itself. Sometimes you have to understand what your capacity and your strength is and how you can minimize the waste of resources, then decide if you are going to be a grantmaker or an operator.

What do you see as new and exciting trends in philanthropy in Brazil?
When Brazil’s economic growth took off, people realized that there was no parallel social growth. Society needs to be prepared for this kind of economic growth. That was the point when the private philanthropy sector finally understood that it has a very important role in enhancing society, especially in the areas of education and health, and began to discuss how they could act in concert. In addition, there are Brazilian companies with their own philanthropic programmes, and various moves to create pooled funds among individuals.

So although we do not have a partnership between private philanthropy and the public sector, we have philanthropy groups that are sitting together and talking about how to make the social situation in Brazil better. And you can see new foundations being put in place. There are big discussions about endowments and the creation of funds which we did not have a couple of years ago and this is very important. Although we do not have legislation about endowments, we are still finding ways of creating them.

How involved are women in philanthropy in Brazil? And what do you think women bring to philanthropy?
In some respects, they play a big role. Most of the NGOs are headed by women, including the biggest education and health NGOs. They are the ones who are pushing for legislation on tax benefits. They are the ones who talk with the public sector and I think their role is very, very important. In family foundations, too, it is often the women who end up doing the work. Unfortunately, women are still not the ones to sign the big cheques in Brazil, and this is also something that I’m very concerned about.

Do you think it makes a difference to have women actually making the decisions about where the money goes and actually making the donations?
Yes, because I believe that you can only understand the cause and make a difference to it if you get to know the cause. I mean meeting the community leaders and talking about their issues; this is something that women do very well. If you want to have long-term involvement, if you want to see results, it is important that women are doing this. Women are going straight to these areas and understanding what is needed. And because women play this very important role in Brazil, it would be nice if they were also responsible for directing the resources.

But I think the most important thing today is to have an organized philanthropy sector where players can sit together and talk and partner up. We do not have the big forums like you have in the US and Europe. We do not have an association that brings all philanthropists together, and we do not have information on the impact that foundations are creating around the country. If we had this information and it was public, that would be very helpful. It would be the first step in creating an awareness and a culture of philanthropy. At the moment, the philanthropy sector is very shy and very small, if you take into consideration the size of Brazil.

What role does GIFE play?
GIFE is very important to us, but it is not exactly representative of what is happening in the country right now. All GIFE members should be willing to be open about what they are doing – I believe people follow by example and GIFE could show other potential philanthropists what philanthropy is doing for Brazil. So GIFE’s impact could potentially be much bigger. At the moment, it’s still very limited in scope.

What can the rest of the world learn from the way philanthropy is developing in Brazil?
What I like about it is that it’s an opportunity because it’s so new. We have the possibility of learning from the mistakes of others and also of seeing what others have done well.

I’ve also been talking about partnerships among philanthropists and foundations and how this is starting to happen in Brazil. I think this idea is new to other parts of the world, too, so we can be leaders here. This taps into a very Brazilian characteristic. People do like to congregate and talk about improving society together. I think this is the big example that Brazil can give.

Carol Civita is a philanthropist, committed to strengthening the growing philanthropic sector in Brazil. Email carolcivita@me.com