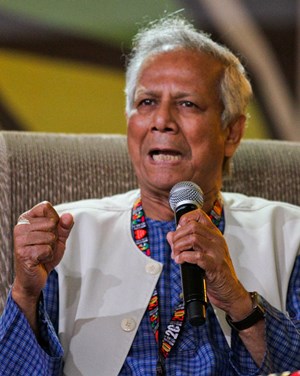 Microfinance, which you are credited with inventing, is an important movement in the history of poverty work. What are the overall achievements so far, and what do you think may be some of the shortfalls?
One thing I would say the word microcredit became very popular – there are courses being taught in universities. Dissertations and PhDs are being written in almost all universities. So it has recognition – partly economic recognition and partly policy recognition. This is an achievement. Almost every country in the world has microcredit. Having said that, it has still not reached all the people who deserve it. So there’s a lot of work to be done. This is number one. Number two, despite all the achievements of microcredit around the world, the banking system has not adopted it.  [Countries] have not widened the scope of banking to reach out to the people who remain untouched by banking. It’s still is a footnote in the financial sector, it’s not on the main stage.

Why is it important that it’s just a footnote?
It has remained the activity of NGOs. And that is not good because NGOs only can [provide microfinance] to the extent that somebody gives them money to lend. So it’s not a self-supporting, sustainable activity for NGOs. As a result, it becomes very limited: it cannot expand itself. The banks that exist today, I can easily say, are the banks of the rich, because the poor are not touched by them. So I am saying, why do we not create another class of banks in the same financial system, which would be banks for the poor – the way we have created the Grameen Bank in Bangladesh? That has not happened – it has been left to NGOs. So there is a big gap – the legal home has not been created for microcredit so far.

What has led Grameen Bank into a foundation, and then from microfinance to social business?
Grameen Bank continues to function as it is, but as I was doing the activity microcredit and reaching out to the poor people, I saw many of the other problems of poor people, like healthcare, education, housing, sanitation and nutrition. So every time I saw these problems, I tried to see if I could find a solution for that, and I created a business to find the solution. I created many, many such businesses — more than 50 such businesses — all geared towards solving problems. One special feature of these companies that we created is that we are not interested in making personal money out of it. These are all done – to solve the problems. The profit stays with the company; it doesn’t come to me. So this type of business started getting a name – social businesses – non-dividend companies to solve human problems. Now many countries are adopting them.

To give a more mature example – Danone, in France, is a big milk production company. We have a joint venture as a social business, meaning that Danone will never take any profit out of the business. Almost half the children of Bangladesh are malnourished, so we created this yoghurt and made it very cheap and delicious so that children love it and they can afford it. Now that problem [malnutrition] is being solved. We have a joint-venture with BASF in Germany, producing mosquito nets in Bangladesh to help prevent malaria. Again, BASF doesn’t want to take any profit out of this company.

And do you see that eventually foundations per se will be phased out and they’ll all become more like social businesses?
I would say that foundations will remain foundations, but they will use their money more wisely. Their money will be used more and more in social business because they’ll see it’s a better use of the money than just giving it away.

What are some of the challenges confronted by social businesses and some of the criticisms?
The criticism – they say, ‘oh it will not fly, that idea has no future because money is the real incentive, you are not giving the profit incentive to people. Why should anybody invest in your business?’ And I say, ‘well, people are not only looking for profit, they also give away their money, so instead of giving it away, they can invest it here and get a better use of their money. So this is a better option.’

How do you measure impact and how do you actually make a difference?
It’s very simple. A social business is created to solve a problem. So I will ask you the question, ‘what problem is your social business trying to solve?’ Then you say, ‘I’m trying to solve the problem of five unemployed young people’. ‘So how are you doing it?’ ‘I have created a social business so that I take these five unemployed young people, turn them into entrepreneurs. And that’s my social business. They are becoming job creators, rather than job seekers. So I have done that and you don’t need a microscope to see what you have done.  If I have not succeeded in doing that, my business has failed; they are still unemployed.

You’re giving a very micro example.
You can expand it – you can say I want to take five million people out of unemployment – and if I have not done five million then I have not succeeded. All I’m saying is that measuring impact is not a problem, because you have defined it by your business itself.

You can measure the success – there are people who have never had bank accounts who have bank accounts. But poverty never leaves us. So how can you make sure that a social business cuts the level of poverty?
There’s a continuous process of measuring that, like the Millennium Development Goal if you remember? The first goal was to reduce poverty by half by 2015. Now we are in August 2015. By December 31st we are supposed to bring poverty to half in every country.

But we haven’t done that.
Yes, Bangladesh has achieved it in the middle of 2013. Bangladesh has been congratulated for achieving this Millennium Development Goal 2½ years ago.  In Bangladesh we have decided we will put 2030 as the year in which we will bring poverty to zero.  If you can reduce something by half and continue that process, you can bring it to zero, by a simple calculation. So I don’t see it as utopian and impossible, because it is happening. So if Bangladesh has done that, can other countries do that? Of course other countries can do that.

Is it just social business that reduced poverty in Bangladesh?
The question you raised is whether poverty can be eradicated. I’m not saying that microcredit has done that, I don’t think that governments have done that. I don’t think that national agents have done that, but it has been achieved for some reason. And if it can be achieved, we can repeat it. It’s a very simple thing.

Still, the world is getting more unequal.
Yes, it’s getting wider and wider. 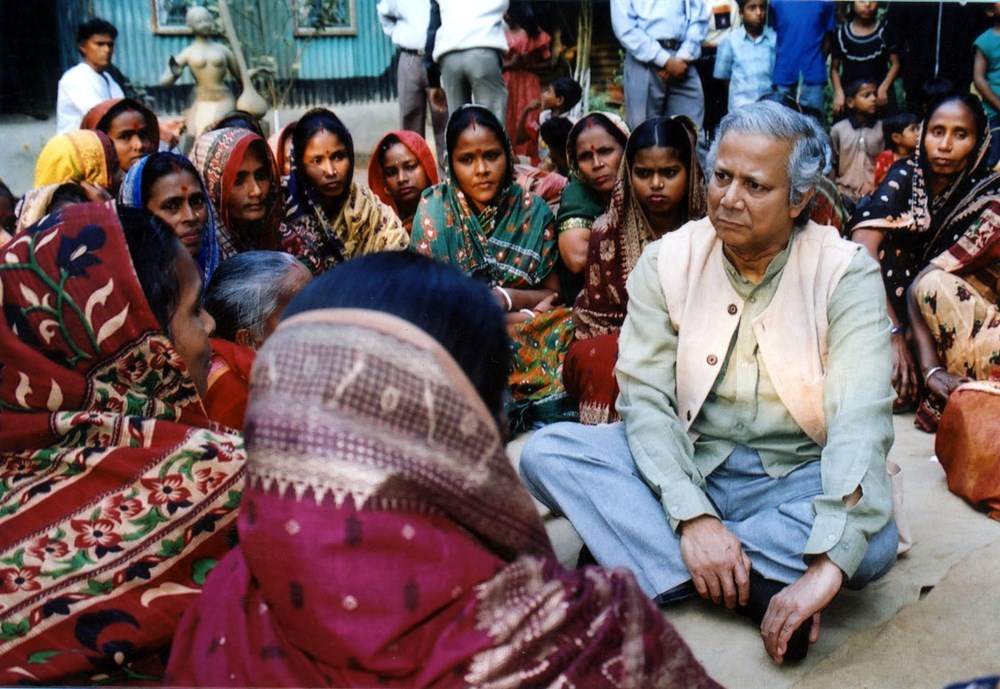 You can see in small communities, as soon as somebody gains some financial independence it gives them a certain cachet. If you’re a foundation trying to reduce poverty and inequality, what do you do about that natural tendency of people to keep – and not share –  the things they gain?
First of all, it’s the same point. If you increase disparity, some people will remain at the low income or even a lower income level, and some people will get richer, and so the gap will get wider and wider.  But my point is that with the profit-centric system that we currently have, we will continue to widen disparity – there is no cure for it. Unless we get out of this profit-centric direction, profit can become an addiction for us, and we are all convinced that this is the way the economy has to run. If you are the richest, you get the highest support from the banking system, so that you can double your wealth in no time, because banks are putting the work in. We are de-linking ourselves from the profit-centric model and using business to solve problems. Maybe if more social businesses are created, that will be reversed.

You mentioned the MDGs. Does Grameen plan to work within the SDG framework, and how would you advise other foundations in terms of working on SDGs?
We encourage everybody to take the SDGs as their goals, foundations’ goals, personal goals, even the world’s goals. So as citizens of the world, we have to follow and make sure we are successful in every one of them. There are 17 goals in SDGs and 169 targets. Each one is as important as any other, so choose one that you want to concentrate on, or choose a group of them if you want, but together the whole world will be doing all 17 goals, so that by the year 2030, we will have a report card.

And in achieving those goals, what I’m saying is social business will be a human force to make it happen. It cannot be achieved by charity, that’s for sure. You need mobilisation of all the creative power of all people to make it sustainable. Make it stick, make it stay there and make it continue to work – that’s the important thing. And we have to sign up to the UN Agenda 21 on Climate Change so that we can protect the world from general extinction.

As a transition point, I am saying we are to focus on the three ‘zeros’. Creating a world without poverty, without unemployment, and the third ‘zero’ is zero net carbon emission. So if we can achieve those three ‘zeros’ by 2050, we have transitioned into a new civilisation where there is no poverty, no unemployment and no environmental degradation. And in the meantime, we have to change the nature of the economy that we have built. This is an unsustainable economy – we have to redesign the economy if we want to sustain ourselves.

How do you bring in the key stakeholders that you mentioned?
I talk about the summit, [Global Social Business Summit 2015 in Berlin] because the whole idea is to spread the word. And other people will be coming to our social business summit to listen more deeply, to see the experiments. It’s the way new ideas are spread. And it will be taught in the classrooms.  People will learn that there are two kinds of business in the world – one is to make money and one is to solve problems.

Young people have options, foundations have options. I tell the young people, ‘Always tell yourself that you are not a job-seeker, I am a job-creator, because I was born as a job-creator, I was not born to slave under anybody. I don’t want to work for somebody else; I want to do things on my own. I want to be an entrepreneur – that is what I am, as a human being, as an independent, creative person.’ But the system has pushed you to become a worker in some place, so that your life ambition is to find a job. That’s a shame on a human being, making such a distorted view on human life – that you have no time for yourself at all until you are too old to do anything. That is not a good prospect. That is not a good scenario that the current civilisation has created for a human being.