Dubai-based private equity group Abraaj Capital is donating US$10 million to a trust fund to help educate more than 1,200 Palestinian children and youth who lost parents during violence in Gaza in December and January. The fund, launched in May at a ceremony hosted by the King and Queen of Jordan, will be managed by the Palestinian-based Welfare Association. Strikingly, it will have a lifespan of 22 years, allowing it to support young children right through to adulthood.

This will also permit longitudinal measurement of the impact of the programmes during the life of the fund, as Atallah Kuttab, Director General of the Welfare Association, points out.

Abraaj Capital and the Welfare Association have identified 1,257 children and youth aged from infancy to 22, who either lost a remaining parent or the primary income-earner in the 23-day conflict. Most of the orphans now live with extended family and 120 live in orphanages in Gaza.

Kuttab believes that the trust fund’s long-term approach, leveraging the Welfare Association’s local expertise and implementation capabilities, will form a model for strategic relationships between NGOs and the private sector and will encourage high-value individuals to target specific programmes and/or cohort groups over a more typical quick-fix private sector approach. The fund is testimony to what Arif Naqvi, founder and CEO of Abraaj Capital, describes as its commitment ‘to driving sustainable, positive change in the communities in which we operate by investing in projects that bring lasting benefit to the region’. 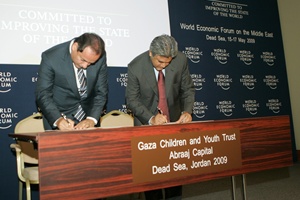 Abraaj Capital will also provide in-kind as well as financial contributions. The hosting of the signing of the Memorandum of Understanding between Abraaj Capital and the Welfare Association by the King and Queen of Jordan illustrates its potential to make the fund’s work highly visible. The fund’s launch also shows, says Kuttab, that despite the current economic climate, when companies believe in a cause they will find funds for social investment.