On 6 April, a 6.3-magnitude earthquake struck the Abruzzo region in central Italy, leaving 295 people dead, 1,500 injured and more than 65,000 homeless. L’Aquila, the capital of the region, and 48 surrounding villages – all close to the quake’s epicentre – were severely damaged. 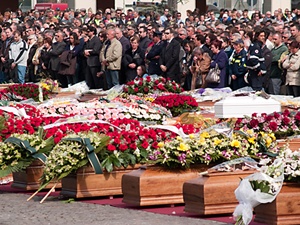 Almost a month later, 36,000 people are still sheltered in emergency camps and about 30,000 in neighbouring regions. Roughly half of private houses and public buildings cannot be used without reconstruction or major repair. Damage was particularly serious in buildings belonging to the University of L’Aquila which has more than 24,000 students. The impact on business was devastating: about 800 small enterprises – the backbone of the local economy – were forced to stop their activity.

The response has been substantial: the Italian government approved a €8 billion emergency package; donations from private individuals amount to several tens of millions and are still growing; and the massive participation of voluntary rescue workers from all over the country has played a vital role.

The Italian banking foundations, under the auspices of their association (ACRI), decided to coordinate their response: each of the 88 foundations will grant an amount equal to 0.015 per cent of its net worth to a fund which will be administered by the local foundation,  Fondazione Cassa di Risparmio della Provincia dell’Aquila. The total amount of grants is expected to be close to €7 million and it could ideally be used to support projects in three areas: student life, small businesses and arts and culture. Rather than contributing to the reconstruction of buildings, this joint programme would aim to help and bring back to normal the life and activity that support the local economy. Among the projects under discussion are a scholarship programme to attract students, grants to theatre and music groups, and a fund to guarantee loans to small businesses.

In addition, it is quite possible that some foundations that are particularly active in the area will contribute special grants to the reconstruction of buildings, particularly historical monuments that have been badly damaged.