EU immigration policies have developed rapidly in the last few years, many of them following a trend of restricted entry for migrants, especially those coming from the South. But EU efforts to harmonize immigration policies have led to a situation that is more complex for policymakers, stakeholders and those affected by key decisions. The importance, then, of a strong civil society is greater than ever – especially given the current political climate in Europe, with the rise of populist parties everywhere talking about security issues and scapegoating migrants.

With the second phase of the European Programme for Integration and Migration (EPIM) coming to a close, sights are firmly set on the future. Having a variety of successes on a Europe-wide level as well as nationally, EPIM grantees have proved that civil society in this area can be strong, and could be stronger still. With this in mind, EPIM will be publishing a new call for proposals at the beginning of 2012. 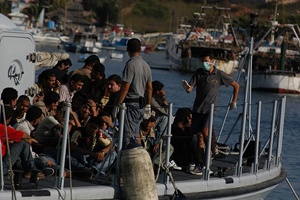 In keeping with previous years, there will be three focus areas. Responding to the development of the Common European Asylum System and the development of new detention facilities, one of EPIM’s focus areas will be asylum. A second focus will be ‘Equality, integration and social inclusion of vulnerable migrants’, which aims (among other things) to promote the social inclusion of migrants at risk of marginalization. The third focus is ‘undocumented migrants’, reflecting EPIM’s long-term commitment to this group of migrants, who are continually at risk of destitution and exploitation, for example thorough lack of access to justice and essential services that guarantee human dignity.  (Pictured: migrants arriving on the Italian island of Lampedusa in 2007. Italy’s southernmost point, Lampedusa has been a key entry point for Africa migrants in recent years because of its proximity to Tunisia.)