Learning from the poor philanthropist?

The majority of South African high net worth individuals (HNWIs) are involved in giving. However, the amounts they give are relatively small, their involvement with the organizations they support is limited, and most of their giving is aimed at humanitarian needs rather than longer-term systemic change. This is the picture that emerges from the first comprehensive survey of South African HNWIs’ philanthropy, undertaken towards the end of last year by BoE Private Clients Philanthropy Office. 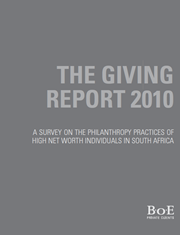 The Giving Report 2010 found that 93.5 per cent of the 400 HNWIs surveyed donated time, money or goods to social causes in 2010 (the year surveyed). However, the amounts given were fairly small, with 53 per cent giving between ZAR1 and ZAR25,000 (around US$3,000). Their chief motive is ‘wanting to make a difference’, which is reflected in the fact that the most supported area is social and community development (organizations dealing with day-to-day care needs in society such as hospices, children’s homes and care for the aged).

Among the good news for NGOs is that over 75 per cent of the donors surveyed give undesignated funding or funds for ‘general support’. Moreover, they tend to be loyal. Over 60 per cent support an organization for over three years and 30 per cent for a lifetime. However, they tend not to be highly engaged or strategic givers. Sixty per cent do not have a strategy and only 22 per cent measure the impact of their donation.

Perhaps the most striking finding of the survey, however, is that humanitarian need, rather than systemic change, attracts the bulk of donations. Both types of support will always be necessary but in a country with one of the greatest divides between rich and poor, solutions aimed at longer-term change are crucial.