Aid agencies have been bemoaning what a UK government official described as a ‘woefully inadequate’ international response to this summer’s floods in Pakistan, and have warned of a worse humanitarian disaster to come. Secretary of state for development Andrew Mitchell, who made the remark, subsequently promised that the UK would commit a further £70 million in aid to Pakistan.

Indeed, many aid agencies have been forced to rethink their initial estimates. A damage needs assessment published in October by the Asian Development Bank and World Bank estimated $9.7 billion in damage to infrastructure, farms and homes, as well as other direct and indirect losses. ADB had earlier announced that it would make $2 billion available to Pakistan to help with the rehabilitation and reconstruction work needed as a result of the devastating floods. 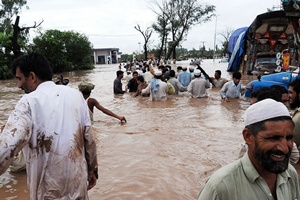 One reason for the sluggish response from individual donors, believes Randy Strash, strategy director for emergency response at World Vision, is that they tend to focus on how many people have died rather than how many are in need of aid. The UN estimates that 20 million flood victims may need help, while around 1,600 have died. He says the death toll ‘represents for many their barometer of how bad a disaster is’. Donor fatigue and tough economic times have also been cited as explanations for the decrease in giving, although, as Asian American Giving points out, western countries were also in the grip of recession during Haiti’s earthquake, which produced much greater giving. The site observes, however, that distrust of the Pakistani regime, which was ranked 42nd in Transparency International’s 2009 Corruption Perception Index, may be giving donors pause.

Subsequently, matters may have improved. The World Congress of Muslim Philanthropists (WCMP) established a Pakistan Reconstruction Fund for severely affected communities in August. Later that month, an emergency meeting of the relief organizations of Islamic Conference member states pledged nearly $1 billion for victims. In September, the Council on Foundations’ US International Grantmaking (USIG) website recorded commitments by a number of US foundations, including $350,000 from the John D and Catherine T MacArthur Foundation to the United Nations Population Fund. The Open Society Institute and its associated foundations have announced they will give an additional $5 million to its foundation in Pakistan in response to the crisis. Give2Asia launched a Pakistan Flood Relief Fund after receiving initial commitments of $30,000 from private donors.

The UK’s private donors, too, have responded positively after a slow start. The Disasters Emergency Committee (DEC), which coordinates the country’s philanthropic responses to disasters around the world, said its appeal raised £9.5 million in the first week, £11.2 million in week two and £19.3 million in week three. ‘This belies all talk of donor fatigue,’ claimed Brendan Gormley, DEC’s chief executive. The latest figure raised by the appeal at the time of writing (end of October) was £63 million.

Selecting charities on the basis of good impact reporting