What is the state of civic space in your country?

CIVICUS has developed a new tool to monitor fundamental freedoms in all UN member states. It shows some alarming trends.

Across the world, fundamental civic freedoms are being undermined and abused. In Hungary, the ruling party has sought to control international funding for civil society, while in the Philippines, the president has threatened to kill human rights activists. Several states in the US have proposed laws to weaken the right to peaceful protest.

According to the CIVICUS Monitor – the first-ever global tool to assess core civic rights, with an emphasis on examining freedom of association, assembly and speech – just 3 per cent of people live in countries where these rights are respected, protected and fulfilled. 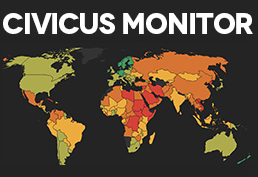 This means that there are almost six billion people living in 106 countries where there are serious violations of freedoms of expression, assembly, and association.

The most common violations of civic freedoms include detention of activists, use of excessive force against protesters, and attacks on journalists. In the majority of cases, the state is the perpetrator of violations. These disturbing trends are apparent in both mature and young democracies.

The online tool’s ratings are measured using qualitative and quantitative inputs, and it is powered by research partners across 20 countries.