A ‘Gospel of Wealth’ for the 21st century

In his Gospel of Wealth, published in 1901, Andrew Carnegie declares, ‘The amassing of wealth is one of the worst species of idolatry.’ He states his position on the ‘duty of the man of Wealth’ in no uncertain terms:

‘First, to set an example of modest, unostentatious living … and to provide moderately for the legitimate wants of those dependent upon him; after doing so to consider all surplus revenues which come to him simply as trust funds, which he is called upon … and strictly bound as a matter of duty to administer in the manner which, in his judgment, is best calculated to produce the most beneficial results for the community…’

No doubt Carnegie chose the word ‘Gospel’, which means ‘good news’, carefully, for the concluding words of his essay suggest he believed he had discovered the antidote to poverty and overcome the ethical challenges of the wealth gap all in one stroke. Conveniently, the economic system was itself never called into question.

‘The laws of accumulation will be left free; the laws of distribution free. Individualism will continue, but the millionaire will be but a trustee for the poor. … Such, in my opinion, is the true Gospel concerning Wealth, obedience to which is destined some day to solve the problem of the Rich and the Poor, and to bring Peace on earth, among men of Good-Will.’

Much has changed in a century. Many of our captains of industry seem less concerned about ‘setting an example of modest, unostentatious living’, the ‘problem of Rich and Poor’ has not been solved, and we still await ‘Peace on earth, among men of Good-Will’. 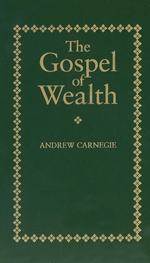 It is time to update the Gospel of Wealth, grounding it in 21st century realities. Few today on either side of the political spectrum would suggest we celebrate the ‘good news’ of our present-day grotesque and growing wealth disparities. The ‘individualism’ Carnegie celebrated is increasingly at odds with the interdependence our systems thinkers understand.  Yet our institutions remain organized around individual and national interests, hampering our ability to tackle global, systemic challenges.

At the same time, we are beginning to acknowledge the fundamental conflict between our exponentially expanding economic system and the geophysical boundaries of a finite planet. Science tells us that this growth trajectory is physically unsustainable unless we can decouple material throughput from economic growth.

Despite our collective heightened consciousness about the ecological and societal challenges we face, the generous among us – and there are many – by and large continue to practise philanthropy the ‘Carnegie way’, although it has clearly failed to deliver the desired outcomes.  While philanthropy is inherently personal, a more systemic approach is called for to meet the systemic crises we face.

How, then, should we rewrite the Gospel of Wealth for the 21st century?

Let us first rename it the ‘Universal Purpose of Capital’, and declare that the purpose of capital as we enter the new era of the anthropocene [1] is to catalyse a shift to a regenerative economy that delivers shared prosperity and respects the biophysical boundaries of the planet. With that purpose in mind, here are six suggested guiding principles for the administration of wealth in the 21st century:

Time is not on our side. A new Gospel of Wealth demands a higher purpose of capital to serve what Thomas Berry calls the ‘Great Work’ of our pivotal time. As Berry reminds us, we are ‘thrown into existence with a challenge and a role that is beyond any personal choice. The Nobility of our lives, however, depends upon the manner in which we come to understand and fulfill our assigned role.’

[1]The current geological age, viewed as the period during which human activity has been the dominant influence on climate and the environment.

Why foundations should be shareholder activists