Celebrating the impact of women’s rights movements over 30 years

What kind of impact can you have by funding small organizations led by marginalized women, girls and trans people globally? This is a question we are often asked at Mama Cash. Given that we see ourselves as a social justice funder, our answer is connected to how we consider change happens and where we, with our relatively small budget, can make the biggest contributions.

In essence, at the heart of our funding model is the conviction that social justice will be achieved only when those existing on the edges of their communities, those whose voices are often overlooked, and those facing severe discrimination are enabled to take and make opportunities to gain power over their lives. This understanding of how change happens drives our funding priorities.

As we are celebrating our 30th anniversary this year, we thought that it was important to take some time to reflect on the achievements of women’s rights movements over the last three decades and to look at what women’s rights organizations can do when given money and support.

Our conclusion? The work of women’s rights movements has led to nothing short of a revolution in public attitudes, law and governance, in the private sector and civil society. While many women’s rights groups are small, their aggregate impact is enormous.

Women’s movements have made great gains
For Mama Cash, the achievements of women’s movements during the last 30 years –particularly those to which we and our grantees have contributed – can be broadly summarized and grouped into four categories:

The injustices, exclusion and discrimination that used to be accepted are now unacceptable. 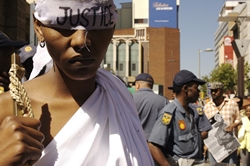 A range of forms of violence against women used to be deemed justifiable, issues for the ‘private’ sphere and not to be discussed. A man beating his wife or a father molesting his daughter were considered to be family matters, something that existed within the confines of the domestic space and not subject to norms and laws that are upheld in public spaces. It’s hard to find people these days who would publicly admit to violence against women being justifiable. That is progress. The One in Nine Campaign in South Africa (pictured) advocates for better implementation of laws and policies related to violence against women.

Cases of justice or equality that we once thought were exceptional have today become more commonplace.
Increased access to leadership positions is an important achievement because – in terms of gender – the field is more level now: some women will be allies, some are not, but no one is excluded only for being a woman. Also, now few question the importance of anti-discrimination policies and laws offering protection in the workplace, educational institutions and beyond. The field is more level but not yet level: in the UK, for example, there is a significant difference in wages for men and women and very little penetration by women of the top jobs. In Greece, not only have women been disproportionately affected by public sector cuts, but legislation designed to further equality and fight discrimination has been put on the back-burner.

Women, girls and trans people who were often spoken for by others are demanding to speak for themselves.
There is a growing recognition of the importance of the people most affected by policies and programmes being at the heart of their design, implementation and evaluation. Strong networks and funds also show that these groups are beginning to control their own resources. Examples of such funds include FRIDA The Young Feminist Fund, the International Forum for Indigenous Women (FIMI) and the Red Umbrella Fund for sex workers.

The focus used to be on protecting women from harm. Now, the positive aspects of rights are championed and women’s agency is recognized.
Women’s rights activists continue to challenge discourses and practices that focus only on protecting women from harm, also championing an affirmative approach to ensure that women have agency over their bodies, sexuality and reproductive lives. So while they continue to resist sexual violence, for example, they also insist that women have the right to sexual desire and pleasure.

What about tangible, measurable changes?
Women’s rights and feminist movements have been at the forefront of achieving legislative and policy change to counter violence. A study of unparalleled scope was published in 2012 in the American Political Science Review [1]. The research analysed 40 years of data on violence against women from 70 countries and concluded that the presence of strong and autonomous feminist movements was the single most important factor in bringing about changes in a country’s willingness to recognize and address gender-based violence. Specifically, this was more powerful in accounting for change than the wealth of a country, how progressive its politicians were, or how many women held positions of political power.

Recently, the Association of Women’s Rights in Development (AWID) conducted an aggregate analysis of the MDG3 Fund, set up in 2008 by the Dutch government. This fund awarded a record €82 million to 45 women’s groups and funds worldwide over three years. AWID’s analysis [2] drew on the results of 33 grantees and found that, among other results: 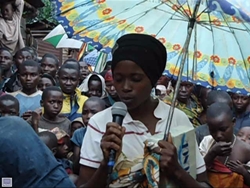 These two studies, as well as our own grantmaking experience, show how women’s rights organizations, many of them relatively small, can have a big impact – but we must document these results. They are mobilizing to demand their rights, making governments accountable for living up to their paper commitments, and leading legal and policy reform. With great success. Association des Mamans Célibataires pour la paix et le développement (pictured) is a group of single mothers in Burundi challenging the social and economic exclusion of single mothers.

Today, 125 countries have laws against domestic violence and 187 countries have ratified the Convention on the Elimination of All Forms of Discrimination against Women (CEDAW). Achievements like these are the result of sustained lobbying, marching, and often active involvement in drafting laws by women’s rights activists and organizations around the world.

Another critical achievement – one often undervalued by funders – is helping to change hearts and minds, attitudes and behaviours in families, communities and societies. This work matters. It means that girls are not the first pulled out of school, that families do not feel the need to ‘hide’ their disabled daughters, that sex work is seen as work and not stigmatized. Changes like this are often harder to measure and rarely happen in one-year grant cycles, but they are essential building blocks for democratic and peaceful societies.

Of course, these changes cannot be attributed to only one player or movement. Change is complex, usually with various players involved at the same time. And it does not happen overnight. It is a long-term effort: it takes thousands of awareness-raising workshops, media interviews, demonstrations, personal stories, research papers, presentations, parliamentary hearings, court cases, one-on-one conversations, coming outs, strategy meetings, long nights, and a few parties too.

What next?
Work remains to be done.

At Mama Cash we see the work that remains to be done not as a sign of failure but an an inevitable process of continuing to build on the achievements made and also responding to the backlash against these achievements – the so-called ‘downside’ of our successes. Much of the gender-based violence against women that occurs today can be seen as part of a backlash against the greater autonomy that women now have. Examples of greater autonomy include a girl wanting to go to school, a woman activist demanding justice in public, a wife applying for divorce, or a woman migrating alone. The tireless work of women’s rights activists has helped to create a world where schools, courts, workplaces and the streets are women’s spaces too – but these spaces are still often contested.

The world today is quite different from what it was 30 years ago. New issues and situations that demand the engagement of women’s rights activists have emerged – and will continue to emerge in the years ahead. This includes new forms of violence (via the internet), new kinds of environmental crisis and economic exploitation, and growing religious fundamentalisms that popularize conservative views on gender.

Also, even though women and girls are now firmly on funders’ agendas, a major achievement, this has not yet translated into meaningful and sustainable new funding for women’s rights groups themselves. In many corners, women’s rights organizations face declining support and a lack of public acknowledgement, and are struggling to get the message across that they have played a significant part in transforming the lives of women and girls.

An additional challenge is the ongoing financial and economic crisis globally, and in Europe in particular. Foreign aid is being cut as more governments face a crisis. Medium and large women’s rights groups that have historically been supported by bilateral donors are now turning to local women´s funds for support. This increase in demand among larger organizations will require new strategies and increased collaboration to ensure that smaller groups pursuing more radical agendas are not jeopardized.

Contemporary realities require new strategies on the part of women’s movements, to protect the gains won and to achieve new ones. We at Mama Cash are excited about forging new partnerships and continuing to play our part.