The good, the bad and the unspeakable – corporate foundations gather in Switzerland

In March 2007, a Dutch TV programme revealed that the Dutch Cancer Foundation had some of its capital invested in cigarette companies and that quite a few pension funds were invested in companies manufacturing landmines and cluster bombs. These revelations spurred a heated debate in many quarters, including the boardroom of Fund 1818, about where the funds of charitable institutions and pension funds should be invested.

Strong feelings were voiced that there should be a clear link between the spending policy of Fund 1818 and its investment policy. The iron curtain that had previously existed between those two was to be pulled apart and a new investment strategy developed, based on the fund’s mission and history. Fund 1818 originated from a private bank, Nutsspaarbank, founded in 1818 with a clear social goal, which sold its banking activities in 1992. At the end of 2009, Fund 1818 had capital of more than €430 million.

The first step was to commission an Asset Liability Management study. This confirmed that sustainable investing is no less profitable than normal investing and that inclusion of Mission Related Investments (MRI) would raise the total risk profile a little. Based on this study, the new asset distribution was to be 40 per cent shares, 20 per cent fixed income, 15 per cent real estate, 10 per cent each commodities and funds of hedge funds and finally – inspired by the work of the F B Heron Foundation, Rockefeller Philanthropy Advisors and others – 5 per cent MRIs.

Our first approach to Socially Responsible Investing (SRI) was negative screening, spurred by the debate on landmines and cluster bombs. The board decided immediately to clean the portfolio of shares in these. But positive screening did not yield the desired results, despite the development of custom-made filters to represent the values of the foundation, mainly because it proved difficult to find passive investment instruments that conform to these filters. Also the cost involved was quite substantial. ‘Best in class’ had similar disadvantages.

After a thorough review of investment policy, the following decisions were made: for the passive instruments (80 per cent of the shares portfolio), sustainable indexes were chosen. One of these (DJSI Pacific) was started mainly because of the wishes of Fund 1818. Seven actively managed funds with sustainable investment policy were chosen for the remaining 20 per cent. A good index for sustainable fixed income was hard to find. In the end ECPI, a little-known Italian firm, was chosen. In asset classes like real estate, commodities and (funds of) hedge funds (35 per cent of the portfolio), sustainability is hard to find. MRIs are discussed below.

Then, in the autumn of 2008, the financial crisis hit. It proved relatively easy to transform the shares and fixed income portfolios, but starting to build up a portfolio in real estate, commodities and funds of hedge funds was more difficult because of the uncertainties caused by the crisis. We have found in these sectors only limited opportunities for sustainable investments. So, at the end of 2009, nearly 20 per cent of the whole portfolio is still in cash.

The decision to include MRIs was not difficult, but finding suitable investments is. Fund 1818 works in a limited region around The Hague and prefers its MRIs to be in that region. Although our staff have a thorough knowledge of the region, providing loans with interest instead of donations, guarantees or loans without interest is a completely new experience. The applicant’s business plan has to be evaluated thoroughly. The solution was to work with a bank. It has now been arranged that ASN Bank, a socially responsible bank investing only in sustainable projects, will formally give the loan to the applicant, while Fund 1818 guarantees the loan and sometimes pays part of the interest. This way the cost of MRI becomes completely clear. The part of the interest that is paid by Fund 1818 can be considered a charitable donation. 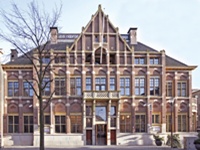 In the meantime, our main MRI investment remains the former headquarters of the Nutsspaarbank (pictured), which is rented out cheaply as office space to social institutions and cultural organizations. MRI investments have also been made in Acumen Fund and in Oikocredit, which invests in small banks that provide microcredit to entrepreneurs in developing countries.

Our implementation of SRI and MRI is not completed yet and it is too early to draw conclusions. But it is clear that the involvement of all concerned, board, investment committee and director, with their different views on these issues, has helped to bring about the transition that has been made.