The Mexican microfinance institution FINAE has received confirmation from the Inter-American Development Bank (IDB) that it is eligible for multi-million-dollar funding from the IDB’s Opportunities for the Majority programme. FINAE, established in 2006, provides loans to middle- and low-income students. Students are selected by universities for their academic talent and financial need, and screened by FINAE for their repayment capacity. Loans cover all tuition fees for the standard duration of their studies, usually four years. Those who receive a loan pay interest only during their studies, then repay the principal progressively once they have graduated and found employment. Pictured below is FINAE’s CEO Francisco Vizcaya (left) with the programme’s first beneficiary, Carlos Guttierez González (right), and his parents. Carlos has recently graduated from university. 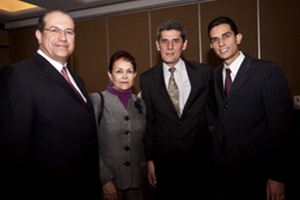 By funding access to higher education, FINAE fills a crucial gap in a country where the tertiary education enrolment rate averages 20 per cent, compared to an average of 60 per cent in OECD countries. Guarantee funds are provided by partner universities, and these help avoid portfolio losses despite a minor loan default rate of 2.8 per cent. In April this year, FINAE’s credit portfolio rose to MXP11.4 million, an increase of 162 per cent over the previous year. It has also received international funding in the form of private equity investments of USD1 million each from two Luxembourg-based impact investment funds, Oasis and SocialAlpha, in September 2009, as well as loans of MXP6.5 million from Oikocredit in January 2010 and USD1 million from Oasis in April 2010. In another sign of its wider recognition, FINAE has been approached by Mexico’s oldest and largest charity, Nacional Monte de Piedad, about the possibility of taking over its scholarship programme. The charity would also match donor commitments to fund student scholarships or low-interest loans through FINAE.