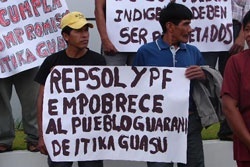 Following a long-running dispute with energy company Repsol Bolivia SA, which had trespassed on their land, the Assembly of Guarani People of Itika Guasu (APG IG), with the support of a grant from First Peoples Worldwide, has now signed an agreement which has created a $14.8 million investment fund that will provide the Guarani communities of Itika Guasu with health, housing and education services, as well as funding development projects. ‘This is the first time that an oil company has signed such an agreement in Bolivia and in Latin America,’ said President Never Barrientos of APG IG. The 10-year renewing Itika Guasu Investment Fund, which came into effect this March, is also the first such fund for an Indigenous organization in Bolivia.

In addition, the agreement marks the first time that a Bolivian authority has issued an official statement legally recognizing Indigenous collective property rights, including ownership of their ancestral lands. The agreement recognizes Itika Guasu as Original Community Territory, and the practice of Guarani ‘customs and uses’ there, including customary practice in conflict resolution. ‘Often funders say that they can’t fund Indigenous Peoples directly because of their lack of capacity,’ says Rebecca Adamson, President and Founder of First Peoples Worldwide. ‘Overlooked capacities and abilities like those demonstrated by the Itika Guasu Guarani should inspire philanthropy to rethink its own capacities and relationships with Indigenous communities, because a lot more successes like this are out there,’ she added.