Audacious philanthropy for our time

Climate change is happening now, and women and children are the hardest hit. Women walk further when water runs out, and work harder for less when changing rainfall wreaks havoc on crops. Fourteen times more women and children die than men during a disaster.[1] Yet only 0.01 per cent of all worldwide grants go to women’s climate initiatives. What will it take to increase this percentage? Audacious philanthropy. This means a lot of courage, some risk-taking and a bit of discomfort.

Last December, the meeting of the United Nations Framework Convention on Climate Change Conference of Parties (UNFCCC COP) or COP20 in Peru hosted the first Gender Day, and launched the Lima Work Programme on Gender to advance implementation of gender-responsive climate policies and mandates across all areas of the negotiation. However, leaders in Lima failed to agree on a plan to avert climate catastrophe, so any climate policies supporting women (especially those at the grassroots level) will be shelved at least until COP21 in Paris in December 2015.

Even if COP21 results in the agreement we are all hoping for, it will take years to implement even the achievable goals. Women who are dependent on natural resources for their survival cannot wait that long. 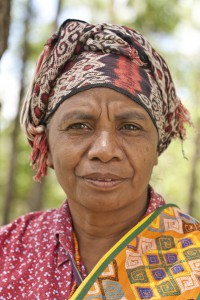 The philanthropic community does not have to wait for another international climate convening or agreement to be passed; it can take action now. Funders can easily support the efforts of women who are already addressing climate change on a daily basis – women such as ‘Mama’ Aleta Baun, founder of Pokja OAT.

In West Timor, Indonesia, one courageous indigenous woman risked her life to shut down destructive mining projects that were destroying carbon-sequestering forests. Mama Aleta, a mother of three, staged sit-ins at four local mines, and saved the homes and ancestral forests of 130 indigenous families. ‘If we cut down the forest, it is like leaving women naked,’ she says. ‘The Earth is our flesh, the rock is our bone, the water is our blood, and the forest our hair.’ Every day for more than a year, women sat at the mines, weaving traditional cloth and blocking the entrance to staff and equipment. Ultimately, their actions drove the mining companies to close their operations.

Baun and her colleagues achieved this significant feat with the support of small, targeted grants, showing that women’s grassroots actions are often cheaper and more effective than those of large-scale initiatives. Unfortunately, projects like this are often less visible than their large-scale counterparts and can be harder for funders to find. Moreover, most funders do not have the programmes or systems to support small, local climate-related efforts led by women.

So how can funders help?

You have more tools at your disposal than you may think. Below are some key recommendations that emerged from the Summit on Women and Climate, held in August 2014 in Bali, Indonesia. Nearly 100 grassroots leaders and representatives from environmental and women’s funds in 37 countries came together to share strategies that women are using to combat climate change in their communities and identify ways funders can effectively support them.

These are just a few of the many lessons and recommendations that funders and grassroots women leaders developed at the Summit. The full guide with case studies, more recommendations and details about how to implement them will be released in March in honour of International Women’s Day.

What should you do with all this? This is where audacious philanthropy comes in. Our future depends on it.