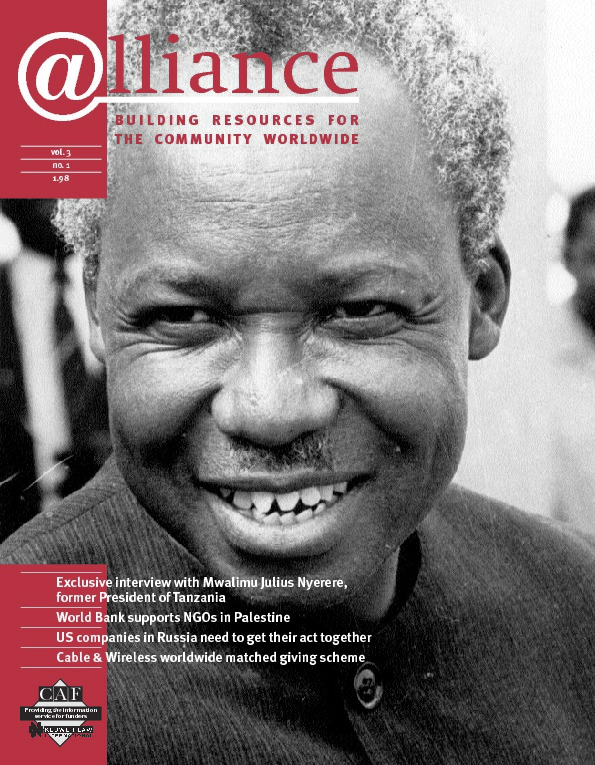 The EFC was established in Brussels on 9 November 1989 by seven of Europe’s leading foundations. Its mission is to help build philanthropy in Europe by promoting and supporting the activities of foundations and corporate citizenship programmes. Today, the EFC has some 160 independent funder members active in Europe and around 7,000 associated and affiliated organizations linked through networking centres in Europe and worldwide.

As a membership-led and membership-funded organization, the Centre’s fundamental commitment is to serve the interests of its members.  The EFC focuses on three core service areas:

At EU level, the EFC is building its capacity to monitor and interact with the European institutions. It maintains close contacts with European Commission (EC) services across a broad spectrum of EU interests, such as the environment, culture, education, Central and Eastern Europe, the Mediterranean Region, transatlantic relations, and the social economy in general. The EC and European Parliament now view the EFC as a first point of reference in matters relating to foundations and grant-giving. Three typical areas where the EFC has effectively represented its membership at EU level are the proposed European Statute on Associations and Foundations, European Parliament initiatives with respect to patronage and sponsorship in culture and sports, and proposals for the future self-regulation of foundations in Europe.

The EFC is committed to playing a major role in developing the social economy. It is involved in the European Consultative Committee for Cooperatives, Mutual Societies, Associations and Foundations, set up in November 1993. With six seats on the Committee, the EFC ensures that independent funders have a concrete input into its work programme. Additionally, the EFC has the key task of coordinating the Committee’s information and training group.

The EFC also has close contacts with the European Parliament. primarily with the Social Economy Intergroup. This aims to increase understanding and awareness of the social economy, to monitor critical issues affecting foundations and corporate funders at the European level, to promote EU initiatives on the social economy and to improve access to funding. An initial meeting focusing on the fostering of civil society in Central and Eastern Europe was convened in September 1996.

The representative role of the EFC also extends beyond Europe – to the World Bank, the United Nations and intercontinental non-profit sector initiatives such as the Johns Hopkins Comparative Non-profit Sector Study and CIVICUS, the international alliance dedicated to strengthening citizen action and civil society throughout the world.

The EFC annual conference is the largest gathering of international donors in the world today.  Since 1990 the EFC traditionally holds its Annual General Assembly and Conference (AGA) on 9 November, the anniversary of the day on which the Berlin Wall came down and — by no means coincidentally — the day on which the EFC was founded.  Each year, the EFC annual meeting brings together some 400–450 representatives of foundations and corporate funders to exchange experience and work together on common projects.

A focus on five specific initiatives will illustrate the EFC’s success as a convenor.

The Funding East Grantmakers Group is the largest group of funders that the EFC helps to convene. It comprises grant-makers interested in Central and Eastern Europe, and is led by a steering committee of funders who meet regularly to provide direction.

In 1996,  just prior to the EFC annual meeting in Paris, a Funding East meeting attracted over 90 independent funders and representatives from the EC, the UN, the US State Department and the World Bank.  Some 30 countries were represented. A similar meeting is planned for 1997.

Corporate Citizenship Europe (CCE) is a partnership of community and public affairs executives from leading EFC corporate citizens and corporate foundation members which are committed to the promotion of more active solidarity between themselves and the societies in which they operate. The CCE Secretariat provides specific information and support relative to corporate philanthropy; it also publishes a quarterly newsletter, efc partners Europe.

The Community Philanthropy Initiative was formally launched in 1997. Its aim is to foster the development of community-based philanthropic mechanisms in Europe that will attract, manage and distribute funds for social purposes at the local level.  These include community foundations, United Ways and locally oriented funding intermediaries. The community foundation is a particularly promising mechanism, and is the primary focus of the EFC’s work.  Currently, community foundations exist, or are under development, in at least 12 European countries or regions.

The EFC Philanthropy Network Project aims to develop mutually empowering relationships among national associations of foundations in Europe. Across Europe there are some 17 distinct national associations serving foundations, and a number of new ‘donors forums’ in Central and Eastern Europe.  The Project is part of the Orpheus Programme, discussed below. Its second meeting will be held at the 1997 EFC annual meeting in Brussels.

EFC Cooperation Agreements have been signed with numerous associations of foundations on other continents. The organizations thereby recognize each other as colleague organizations cooperating to encourage and support the growth of philanthropy. Each organization formally undertakes to:

Information provision is perhaps the EFC’s most important area of service. Without fundamental information – on the legal and fiscal environment for independent funding in Europe, and on the programme interests of private funders – the EFC could neither represent nor convene in a professional way.  The EFC’s information provision takes place on two fronts.  First, the EFC provides members with a stream of current awareness publications on a regular basis. Second, it provides long-term information services under the Orpheus Programme.

The EFC Orpheus Programme provides a public record and a public information service on foundations and corporate funders active in Europe. It is grant-funded separately from the main EFC budget.

Orpheus facilitates a decentralized network of centres throughout Europe and operates a broad range of publications; library, information and database services; network support and training; and issue-specific research.

The Education Dossier provides information on foundation and corporate funders active in the educational sector in Europe. A directory on educational funding in Europe and a volume of case studies are scheduled for publication in 1998.

The Environment Dossier provides similar information for the environmental sector.  Environmental Funding in Europe should be published in late 1997.

European Foundation Fundamentals will produce a ‘user-friendly’ guide to the foundation and corporate funding community in Europe.  Its project proposal is currently under funding consideration.

Funders On-Line delivers and facilitates access to funding information provided via the Internet. Led by a steering committee of 12 EFC members, it provided a second Internet workshop for network centres in 1997. It cooperates with ARIES, the Social Economy Information Network.

The Grants Index Pilot Project is developing a grants index database and publications on independent funding in Europe.

The Philanthropy Network Project, already covered above, is further developing the Orpheus network of philanthropic information centres across Europe and building a European network of associations of grant-makers.

The Social Economy Information Service/Social Economy Library will bring together information relating to foundations, associations and cooperatives in Europe.  The EFC is collaborating with Euro-Citizens Action Service (ECAS) on this project.

Technology Workshops aim to strengthen EFC members’ internal and external use of information systems in order to enhance work with their grantees and partner organizations.

The Civil Society Project develops and sustains indigenous information and support centres serving foundations and associations in Central and Eastern Europe, the Newly Independent States and the Baltic Republics. Launched in 1994, it builds on the centres’ initial capacities, focusing on management training, information and communication, funding from foundations and corporate citizenship programmes, the advocacy of a positive legal and fiscal environment, and the promotion of self-awareness of the social economy. A total of 25 centres, from 15 different countries in the region, participate in this decentralized network.