Flawed landmark – or flawed review? – A response to Michael Edwards 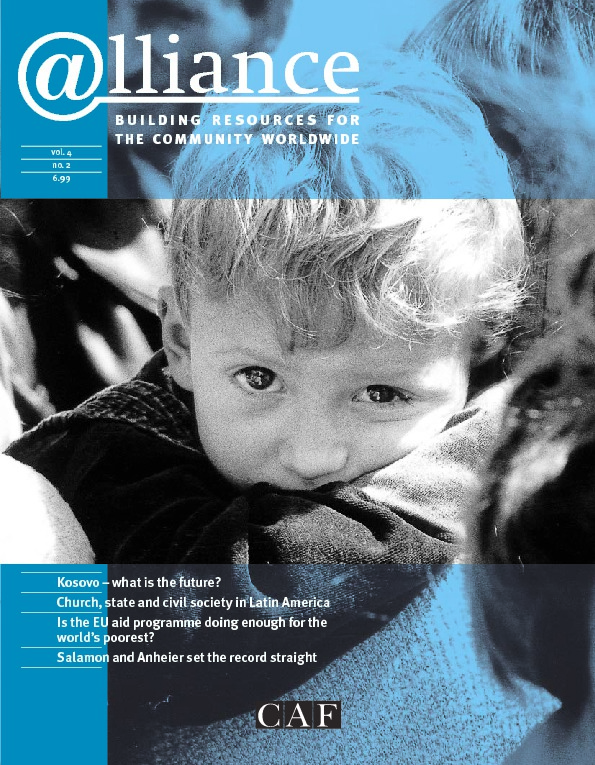 In his review for Alliance (Vol iv, No 1) of The Emerging Sector Revisited, our summary report on the initial empirical results of Phase II of the Johns Hopkins Comparative Nonprofit Sector Project, Michael Edwards kindly praises the contribution that our work has made to understanding the non-profit sector around the world.

But he then identifies several concerns that have arisen about this work within the international development community, concerns that reveal some major misperceptions about what we have done. In order to put these concerns to rest, we felt it important to address these misperceptions here.

Mr Edwards first charges that our work is burdened by ‘ideological baggage’ that has led us to ignore the informal parts of the non-profit sector and focus only on the formal. In fact, this is simply not the case.

Although we did focus our attention on non-profit ‘organizations’ (NPOs), we took pains to use a very loose definition of what an organization is in order to ensure that informal associations were included too. Thus the field instruments that guided our local research made clear that organizations did not have to be formally registered, or even formally constituted, in order to be included: all that was required was that they have some meaningful structure, a condition that most of the associations that Mr Edwards cites would easily meet. As we explained in the summary report that Mr Edwards reviewed: ‘What is important is not that the organization be registered or legally recognized, but that it has some institutional reality.’

As a further step to ensure coverage of the more informal dimensions of non-profit activity,  we supplemented our organizational data in almost all the project sites with data on giving and volunteering that we gathered through personal interviews with local residents. This yielded the first estimates of informal volunteer activity ever developed in most of the 22 countries we examined. As reported in The Emerging Sector Revisited, these estimates placed the level of such activity at the equivalent of 10.4 million full-time employees, boosting the level of activity represented by NPOs – both formal and informal – by 55 per cent over what an exclusive focus on formal paid employment would have yielded. Far from ignoring the informal dimensions of this sector, we have generated the first solid estimates of its scale in most of the places we worked.

Nor did we ignore the networks of clan and family relationships that often undergird the growth of civil society throughout the world, as Mr Edwards suggests. To be sure, we did not attempt to quantify these relationships. However, they were covered extensively in the historical research we undertook to understand the varying patterns of non-profit growth and structure in different places. Thus, for example, the chapter on Ghana in our ‘developing country book'[1] contains a lengthy discussion of the Asafo Company, the susu group and migrant associations – all tradition-based, informal associations providing credit and social functions in West Africa. ‘Cremation societies’ in Thailand, the Irmandades de Misericordia or Brotherhoods of Mercy in Brazil, the Islamic tradition of zakat and al Waqf in Egypt, and the caste associations in India all performed similar informal functions and received similar extensive treatment in our research and publications.

That such a serious effort was made to capture these informal dimensions of the non-profit sector was in part a product of the collaborative way in which we carried out the work and in part a product of our own backgrounds and experience. Contrary to the charge of ‘Western bias’ and ‘ideological baggage’, the team of colleagues who developed and subsequently refined the definitions and field instruments used in our project included knowledgeable observers from the South as well as the North – from Egypt, Brazil, Ghana, India, Thailand, Peru, Colombia and other countries – whose claims to understand the true character of this sector in their countries are at least as compelling as those of Mr Edwards and his colleagues. What is more, our own baptism into this sector was through in-depth exposure to similar informal groups — Salamon through the civil rights movement of the 1960s in the American South and Anheier through field work in Africa in the 1980s.

To be sure, the research techniques we had available to capture the informal dimensions of non-profit activity were far from perfect and further improvements are in order. But to suggest that we were blinded by ‘ideological baggage’ into ignoring ‘other people’s realities’ strikes us as misleading. To the extent that it was feasible, these other realities are very much reflected in our work.

Equally misleading is a second critique that Mr Edwards offers — that our approach was concerned chiefly with measuring the size, staffing and revenue characteristics of NPOs to the exclusion of ‘what these groups actually achieve’. In fact, as our report makes clear, ‘evaluating the impact these organizations have and the contribution they make’ was one of our chief goals in the phase of our project that Mr Edwards reviewed.

To achieve this objective, we launched a truly massive effort to evaluate what NPOs actually accomplish. As in other aspects of our project, we have sought to get beyond a mere recitation of ‘success stories’ and use a systematic approach. Accordingly, we worked with our local associates to identify a set of distinctive ‘functions’ or ‘special competencies’, and a corresponding set of ‘drawbacks’ or ‘limitations’, that existing literature and local lore suggest NPOs are supposed to exhibit. The research teams in each of our 22 (soon to be 42) countries then set out to assess the extent to which NPOs actually perform these hypothesized functions or exhibit these drawbacks.

To do so, each team has chosen three fields of non-profit activity – one each in social welfare, economic rights, and human or civil rights – and carried out in-depth interviews, ‘focus groups’, empirical data collection and detailed case studies in each. For the 42 countries in which we are working, the ultimate result of this effort will be 126 field studies and more than 200 separate case studies, all guided by a similar set of analytical concepts that has been tested at the local level and reviewed by an advisory committee composed of non-profit activists from many parts of the world. Hundreds of person-days of effort have already gone into this task, making this possibly the most exhaustive effort to gauge the contributions and achievements of the non-profit sector ever undertaken.

To be sure, we made a decision to release the results of our initial mapping of non-profit sector size and structure in the various project countries before this impact analysis has been completed. We did this in response to the intense interest in this basic descriptive information throughout the world. Mr Edwards did not therefore have access to this part of our work. To suggest on the basis of this, however, that our project is neglecting ‘what these groups actually achieve’ is clearly wide of the mark.

So, too, is the third charge raised by Mr Edwards – that our project has somehow ignored ‘broader issues of political economy — especially the links between the changing shape of the third sector and issues of poverty and power, conflicts of interest within society, and the proper role of the state’. Far from ignoring these issues, we have made them the central focus of a new theoretical approach to analysing the third sector.[2]

This ‘social origins’ approach rejects the prevailing economic theories that view the shape of the non-profit sector as the product simply of consumer choices in a free market. Instead, it utilizes a political economy approach that traces the character of the non-profit sector in a society to ‘prevailing social and economic structures’. Different patterns of third-sector evolution, we argue, thus reflect different power relationships, in particular ‘the balance of power among social classes, between state and society, and even among nations’ – in other words precisely the ‘broader issues of political economy’ that Mr Edwards accuses us of ignoring.

Michael Edwards and his colleagues in the international development community are certainly correct in suggesting that much can be gained by cross-fertilization between accounts of NGOs in development settings and empirical studies of the non-profit sector of the sort that we have undertaken in both the developing and the developed worlds.

What he fails to note, however, is the extent to which the Johns Hopkins Comparative Nonprofit Sector Project has already begun to bridge this divide – by taking explicit account of the informal components of the non-profit sector, by undertaking a massive effort to analyse the sector’s achievements, and by formulating a new body of theory that goes a fair distance toward unravelling the broader ‘political economy’ that shapes the sector’s development.

In each of these areas much more remains to be done. But a useful first step must surely be to get beyond misleading stereotypes and acknowledge the considerable progress that has already been made. In that way we may find that the gulf that Mr Edwards wisely urges us to bridge may not be as wide as he suggests.

Re-creating USAID as an ‘enablement agency’?