Despite the expenditure of millions of dollars of aid, Indigenous Peoples throughout the world are getting poorer. Many in the philanthropic community believe this is because of a lack of capacity among Indigenous communities, which they aim to address by funding intermediaries working on behalf of those communities. However, two recent developments turn this thinking on its head. The first is the endorsement of the United Nations Declaration on the Rights of Indigenous People (UNDRIP) by all the countries involved with Indigenous Peoples, a victory achieved largely without benefit of traditional political and philanthropic support. The second is a research project undertaken by First Peoples Worldwide. Together, they suggest that the problem is not so much the lack of capacity of Indigenous communities but the inability of donors and funders to adapt their paradigms to the worldviews of Indigenous Peoples.

The traditional philanthropic paradigm is a transaction: one gives, the other receives. This is alien to most Indigenous communities whose giving instead stresses reciprocity. In other words, it’s a relationship. If we want to change outcomes in Indigenous communities, the first step for donors is self-reflection. It is all too easy for institutions from the dominant culture to assume their worldview and values are universal and right. They are neither. This is not to advocate that foundations abandon their values and worldview, only that they recognize that other cultures have worldviews that are strikingly different.

Funding patterns
A literature search revealed that the majority of the funding for Indigenous organizations comes from Europe – from national governments, NGOs, religious groups and more recently the European Union.[1] Very little comes from the US. The US Agency for International Development has no policy for dealing with Indigenous Peoples. The only money it provides for work with Indigenous Peoples is routed through conservation NGOs such as World Wildlife Fund and The Nature Conservancy and consulting firms such as Chemonics Inc and International Resources Group. A greater potential source of support in the US is private foundations, but few US foundations give regular grants to Indigenous Peoples. Among those that do work with Indigenous Peoples, their efforts have been uneven and their grants often channelled through intermediaries. The Europeans often support long-term processes such as training and education while US funders tend to favour discrete projects with short timeframes.

However, money – as usual – is not everything. A far greater problem is the repeated denial of Indigenous Peoples’ right to tell their stories and articulate their aspirations (here again, European agencies tend to be better than their US counterparts, trying to respond to the needs of Indigenous communities rather than impose their own agendas). No amount of money can improve the lives of Indigenous Peoples if they are not allowed to define their own destinies according to their understanding of success and well-being.

Invisible capacity
At First Peoples Worldwide, we have just completed a three-year study on How to Improve Indigenous Peoples Access to Funding, funded by the World Bank. A global survey was conducted among 130 Indigenous practitioners across four regions − Africa, Asia, Latin America and the Pacific − to collect their fundraising experiences and to identify and document core community capacities.

A series of roundtables was held between June 2007 and June 2010 in each of the regions. Participants were community-based practitioners who were involved either in stewardship projects or in local alternative sustainable development and income-generating projects. All roundtable participants completed the survey.

The findings indicate that donors are failing to recognize existing capabilities and that the bureaucracy they impose often limits or even prevents the engagement or use of that capacity. The consequence? Lost opportunities, no leverage, limited impact and minimal results. Surprisingly, the study found that corporations’ approach to funding tends to be more reciprocal than that of foundations. They are better at consulting and listening and more transparent in their practices.

Part of the project involved an experiment to see how the 25-35 participants at each roundtable would give away $20,000.[2] In deciding how to do this, participants consistently set out transparency, fairness and consensus as their operating values. The processes and grant decisions varied widely but a range of capacities emerged. Mobilizing untapped resources, leveraging results and sophisticated strategic action were evident in each region. All the grant discussions were videotaped in order to assess specific capacities and to develop training for donors on how to identify and utilize local knowledge.

Groups from the Pacific region used their $20,000 to set up a learning exchange among the Asia Pacific islands to share information about how to enforce regulations against fishing in protected marine areas. The islands whose enforcement was most successful got $5,000 apiece for travel between islands to share with others how they did it. So while four islands received grants, many more communities benefited from learning about the more successful enforcement models. This achieved the widest possible distribution of limited resources. Practitioners were very strategic in picking models and in working out how to expand this success.

In Africa, the group decided to divide the $20,000 equally among them. Many funders would say this was the least strategic way to go. However, they wanted to build political solidarity: a crucial step for Indigenous Peoples in the African environment. A nascent network formed, a long-term vision emerged, and the basic political platform for co-management and Indigenous stewardship was agreed upon. Crucially, the African roundtable grantees adhered to their cultural value of the widest distribution of resources to avoid the ‘haves’ and ‘have nots’ syndrome that is so disruptive to Indigenous practices and balance. 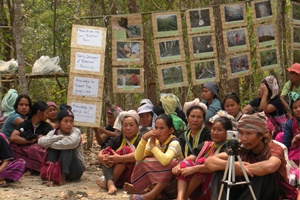 In Asia, the group focused on an immediate need. In Thailand one of the Karen communities was in imminent danger of eviction. The group dedicated half of the $20,000 directly to the 5,000 Karen people of the Aub Khan Riverbasin. The rest was divided among Indigenous groups equally. Evident here was the cultural norm of sharing and helping along with the pragmatic realities of building political solidarity and responding to an imminent threat in which many of the Asian roundtable grantees could see themselves. (Pictured are members of the Karen hilltribe meeting with government officials to discuss woodland burning – a sustainable, non-polluting practice which is vital for their farming.)

Rather than trying to determine whose needs were ‘greatest’ or which project was ‘best’, funds were consistently distributed widely among communities. The decisions reflected a sure grasp of the best way to leverage their resources, including learning from each other. They also accorded with deep cultural values to build relationships of reciprocity and avoid creating ‘haves’ and ‘have-nots’ – establishing formal ties that would keep them working together long after they parted. All of this demonstrates untapped capacities that foundations could catalyse with more culturally sensitive practices.

Principles of funding Indigenous communities
The first lesson for foundations is that they need to learn to engage in culturally diverse paradigms of giving that align with the values of Indigenous Peoples, respect the right to free, prior and informed consent, and honour traditional mechanisms for decision-making. They must accept that Indigenous organizations don’t apply sectoral or single intervention approaches such as ecotourism, protected areas or community conservation. Their approach is holistic. Any NGO receiving funding for work in Indigenous territories should have a clear Indigenous policy (along the lines laid down by UNDRIP), developed in coordination with legitimate Indigenous organizations, and Indigenous board members.

There are also some very practical things that foundations could do, like providing translations and simplifying application procedures and accounting systems, and making sure the foundation is transparent to all Indigenous Peoples in the affected communities.

Let me give one example from our work at First Peoples Worldwide: experimenting with videotaped grant requests. Well aware that our existing grant application process posed significant barriers for Indigenous communities – from the reliance on the English language to the very idea of laying out a strategy in a linear fashion – we asked communities to tell us about their needs and ideas for adapting to climate change in video form. The response was overwhelming.

Those institutions willing to approach these challenges with a sense of humility and a curiosity about those whose lives differ radically from their own can be the bridges to a healthier, truly sustainable future. Embracing a new philanthropic paradigm in which Indigenous Peoples are full programme participants rather than merely the recipients of assistance will profoundly change their lives – and ours.

1 Thanks to Mac Chapin, who provided invaluable information on this.

2 The Latin America group decided on travel to the IUCN conference, and then IUCN paid for it so we did not do a grant to this region.

JP Morgan has heralded impact investment as a distinct asset class – but is there a fly in the ointment?