Do More Than Give 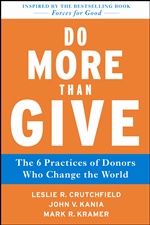 Do More Than Give is full of unquestionably – relentlessly, even – positive instances of creative behaviour by (for the most part) US foundations. To examine it critically is rather like criticizing motherhood, and possibly even apple pie. Some of the examples are inspirational, such as the work of the Jacobs Foundation, which somehow overcame huge political differences between members of the donor’s family to emerge with a large and coherent urban community renewal initiative in San Diego, or the work of the John S and James L Knight Foundation, which developed a $24 million challenge fund to encourage community foundations ‘that discovered creative ways to use new media and technology to keep community residents informed and engaged’. And yet … and yet…

I have two gripes. First, I was asked to review this because the book’s title gives the impression that it focuses on what I and the co-authors of a recent research paper[1] for the Institute for Voluntary Action Research (IVAR) have called ‘funding plus’ – the things that funders can, and sometimes do, do that go beyond grantmaking. But much of Do More Than Give is about what one of our advisers called ‘funding better’ rather than ‘funding plus’. Decisions to focus on social change, or to be more strategic in one’s approach to giving, are not the same as a decision to use resources – such as convening power, networks and branding – available to funders in addition to money in order to pursue the funder’s goals.

Second, to the extent that it does look at funding plus, it seems to accept uncritically that the phenomenon is ‘a good thing’. But in our work for IVAR we found that, in the UK at least, there were grantees worried about the risk of ‘mission drift’ due to pressures from funders to engage in time- and resource-intensive funding plus activity. Some grantees felt that funders were too demanding of their time and input. Grantees in our study referred to the importance of keeping a balance between the funder interfering and the funder adding value.

While these issues can look very different depending on which side of the pond one works, it is incontestable that relationships between funders and those they support are based on unequal power. Yet there is barely a mention of this here, let alone any critical assessment of the implications of ‘doing more than giving’. The kinds of issues that arise – but which remain largely unexamined in this book – are the risk that funders taking a lead role in pursuit of a social change goal may usurp what frontline organizations see as their role. Inevitably, such activity consumes money that would otherwise be available for grants. I am aware of specific instances where this has caused considerable offence in the UK – and where the grantees concerned have felt unable to voice their views candidly to the funders, for fear of biting the hands that feed them, and which they want to go on feeding them. And when funders decide to offer training and other forms of capacity building for their grantees – an offer that is hard for grantees to refuse, whether it’s something they think they need or not – who decides what’s needed?

I think I understand why this book doesn’t focus on these awkward issues. Its purpose is to inspire rather than to reflect, which is fair enough, if that’s what the reader is looking for. More fundamentally, there is a real cultural difference between a European and a US perspective on these matters. US philanthropoids (and others) worry far less about means than Europeans. For example, it is in the US a positive advantage for board members of foundations and other non-profits to have deep pockets and broad contacts, whereas in Europe we worry about restricting board membership to the well-heeled. I think we are sometimes too obsessed by these issues, and that it often holds us back –  but also that in the US they need to be a little more concerned than they are.

There is a third important cultural difference reflected in this book, which reflects poorly on the UK at least (I am not sure about the situation elsewhere in Europe): Americans work much harder than we do. The work described in this book is work that surely reflects a degree of sheer effort, which in our lazier sector tends not to happen.

In summary, then, Do More Than Give is an interesting and inspiring read. It’s just not really about doing more than giving, and insofar as it is, it accepts uncritically the idea that this is what foundations should do – which I don’t.

1 To read Beyond Money: A study of funding plus in the UK, visit the IVAR website at http://tinyurl.com/beyondmoney

Steven Burkeman is an independent consultant based in the UK, working mainly with foundations and human rights organizations. Email burkeman@gn.apc.org