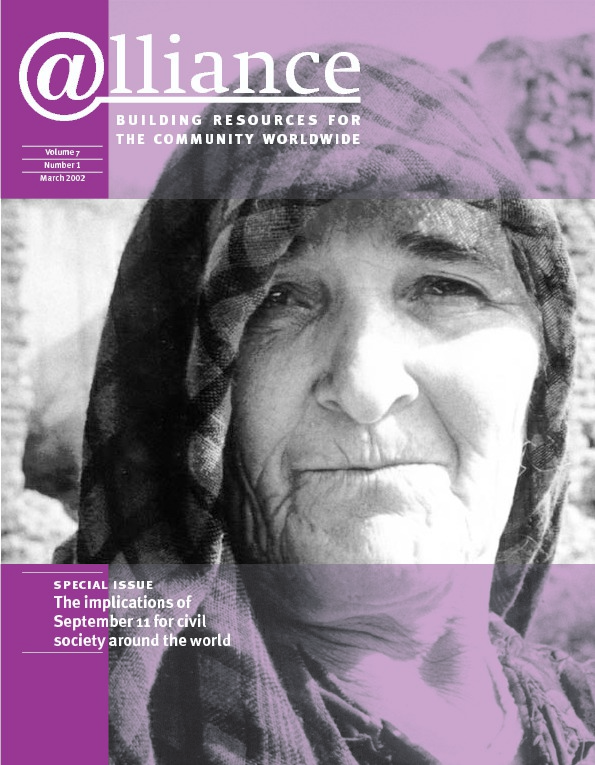 Why has global civil society entered international developmental discourse and reality in such a profound and probably irreversible way?

Some of the main factors, culled from different articles, appear to be: the globalization of market fundamentalism; the relative immunity of transnational corporations to control by nation states; the growth of suprastatals like the WTO that operate beyond public scrutiny and the resultant weakening of nation states; and widespread cynicism about political processes and the consequent spawning of social movements, such as those related to third world debt, landmines and human rights.

Michael Edwards, in a thoughtful introduction, makes the important point that there is a growing democratic deficit in global governance and that the issues of legitimacy, accountability and representation must be faced squarely by international networks and NGOs. These issues are raised by several contributors: whose voice is being heard – that of Northern NGOs or Southern NGOs or affected communities? Anne Florini argues that while governments and corporations are under mounting pressure to become transparent, civil society is not subjected to either elections or market tests. Many contributors call for self-regulation and more openness about the internal governance of civil society organizations. The issue of accountability is raised often in the book. Even if elections are held in democracies, citizen participation in governance is often restricted to voting and people find themselves powerless between elections. In the case of civil society organizations, even if there are regulatory authorities and audit, true accountability lies in their lived connections with the disenfranchised. But this remains a vexed question.

In the section on global civil society and international financial institutions, David Brown and Jonathan Fox remind us that in 1999 more than half the World Bank’s funding went towards macroeconomic structural adjustment loans which are beyond the pale of civil society scrutiny and not even subject to the Bank’s own social and environmental policies.  Even so, there is recognition that the Bank has been responding to international pressure –though Jan Aarte Scholte’s report card on the IMF documents little progress and many hiccups. Reviewing Latin American experience of multilateral lending operations, Diana Tussie and Maria Fernanda Tuozzo raise the question as to whether participation is mere window-dressing when there is so little democratic decision-making.

The section on global campaigns describes and analyses a variety of them: landmines, Jubilee 2000, children’s rights, corporate change, the environment and so on. Almost all the articles note the various levels of campaigning – local, national, regional and international – as also the remarkable emergence of new alliances and new approaches to international governance. Strong grassroots support and the building of domestic constituencies for reform are two of the factors identified as contributory to success. This reviewer is a participant at the grassroots level in an ongoing Global Campaign for Secure Tenure launched by the United Nations Centre for Human Settlements in India, the Philippines, South Africa and other countries. The key determinant of impact has been the strength and vigour of local and national processes. It has been our experience that no amount of campaigning can secure benefits for the poor in the absence of wide and deep roots in society.

In the section on lessons learned, the pieces by Charlotte Brunch et al and Sheela Patel et al both stress local focus while simultaneously building broad-based global coalitions. Caroline Harper sees research as crucial to the construction of counter-narratives that will dislodge dominant positions, while John Gaventa refers to the need for large institutions to make internal changes so as to become more open to civil society initiatives.

On the whole, a thought-provoking compilation in terms of the questions it raises about the role of global civil society, its obligations and its future. The mix of practitioner and academic contributors gives the reader a hands-on feel as well as a reflective perspective.

Sundar Burra is Adviser, Society for Promotion of Area Resource
Centres (SPARC). He can be contacted at sundarburra@hotmail.com
To find out more about SPARC, visit the website at http://www.sparcindia.org or email sparc@sparcindia.org

Managing for Change: Leadership, strategy and management in Asian NGOs by Ian Smillie and John Hailey